ONE TRAVELING GARDEN gnome. A star-crossed couple on a sinking ocean liner. Eleven crooks on a European heist. And Bond-James Bond.

These are just four of the travelers who didn’t make it onto our roundup of the twenty greatest travel films of all time. Not because we didn’t like Amelie, Titanic, Ocean’s 12 or the Bond movies, mind you, but because we just didn’t have the space.

Movies have the power to inspire, to take us on a trip without requiring us to get off the couch. And sometimes the most inspiring films aren’t really about travel at all.

Without further ado, here is BNT’s definitive list of the 20 greatest travel movies of all time.

These French films (both directed by Cedric Klapisch and both featuring the incandescent Audrey Tautou) follow the physical and mental travels of grad students (L’auberge) and, five years later,young professionals (Poupees).

It’s been argued that both films serve as apt allegories for the European Union-each main cast member is from a different country-and it was both hilarious and touching to see our heroes react to different situations as their cultures collided and coalesced.

The Holy Pilgrimage: Indiana Jones and the Last Crusade

It’s hard to choose between Raiders of the Lost Ark and Last Crusade for best Indiana Jones film (let’s pretend Temple of Doom never happened), but both are doubtless travel films that will make anyone want to hop a plane.

We give the edge to Last Crusade for the spine-tingling final trip to the grail’s lair (and we believe we have chosen…wisely).

Before that final scene, we get to see the scorching deserts of Utah, the canals of Venice, the streets of Nazi-era Berlin, and mysterious Jordan.

The First Date: Before Sunrise 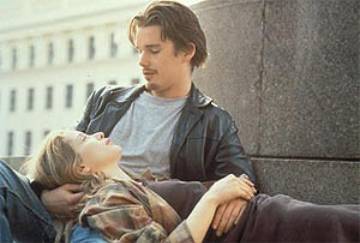 Ethan Hawke and Julie Delpy in “Before Sunrise”

It’s not exactly hostel sex (and many say that its sequel, Before Sunset is much better), but travel is still an aphrodisiac between Ethan Hawke and Julie Delpy in this 100 minute-long conversation through Vienna.

From train to city centre and back again, we see two people out of their element explore with a wide-eyed wonder that speaks to their wanderlust-and their ultimate lust for each other.

The Test of a Relationship: Two Days in Paris

For those of us who have traveled with significant others to results less than fairytale-like, the story is immediately familiar.

An un-romanticized (though no less tempting) backdrop of Paris fuels the wanderlust and while the end is not necessarily a ride off into the sunset, it’s easily the most realistic cinematic take on couples’ travel.

“Joey, do you like movies about gladiators?” “Looks like I picked the wrong week to quit amphetamines.”

This is either the movie that makes you never want to set foot on a plane again, or get to the nearest airport immediately.

A spoof on the then-popular airplane disaster movies, ex-Navy pilot Ted follows his stewardess ex onto a plane to win her back and-several dozen infamous quotes later-saves the plane from certain doom.

That Sullivan’s Travels was made so close to the end of the Great Depression speaks to the true Swiftian satire of writer/director Preston Sturges.

While Sullivan is good at his job of making light, comedic films, what he really wants to do is direct an expose of the social problems plaguing the United States (titled O Brother, Where Art Thou?)

What he eventually learns, after going from riches to rags in an attempt to understand the common man is that the country needs comedies to forget about its social problems.

The Odyssey: O Brother, Where Art Thou?

Before they won the Oscar for No Country for Old Men, the Coen Brothers were nodding to Sullivan’s Travels with 2000’s O Brother, Where Art Thou?

Based on the Odyssey of Homer (which these two claim to not have read prior to making this movie) and A Dozen Tough Jobs by Howard Waldrop, O Brother follows George Clooney, Tim Blake Nelson, and John Turturro through Depression-era Mississippi to break up Clooney’s ex-wife’s wedding.

The Road Trip: Flirting With Disaster

Sometimes it takes an outsider’s perspective to really teach you about your home country.

Borat was one of those characters who gave we Americans some much-needed edification. An ice-cream truck is a great way to cross the country (and, failing that, a busload of evangelists will do the trick).

A bear may kill your wife, but it’s still great protection against the Jews. Every mortgage brokers’ convention should be interrupted by two men in a naked brawl. And you can always find enlightenment in an RV full of frat boys (not).

The Great Cardio Workout: The Lord of the Rings Trilogy

Its final installment may have won the Oscar, but we can’t help but agree with the Clerks II assessment of the trilogy: a lot of walking, more walking, dropping a ring in a volcano, and walking back. Still, like Star Wars, this is a pretty epic trek that is all about the journey.

That the film revitalized New Zealand tourism doesn’t hurt, either. 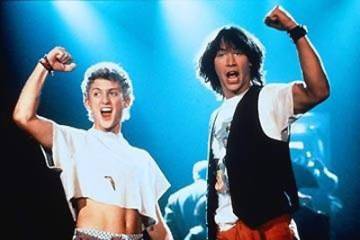 Whoa! Not only do Bill S. Preston Esq. and Ted Theodore Logan travel as far back as the 400s BC, they hit up Austria, Germany, Greece, Mongolia, France, Antebellum D.C., and the Wild West.

But perhaps the real travel here is their band of historical figures-everyone from Beethoven to Freud to Genghis Khan to Joan of Arc-coming to terms with life in the late 80s at the San Dimas Mall.

And let’s not forget Napoleon having a field day on the slides at Waterloo Water Park. Most excellent.

The Family Vacation: The Darjeeling Limited

We can always count on Wes Anderson to make us feel better about our own family quirks and his most recent installment, 2007’s The Darjeeling Limited, is no exception.

With a soundtrack almost entirely dedicated to Merchant Ivory and Bollywood film scores and an ode to train travel not seen since Paul Theroux, this may also be one of his most visually appealing films.

The Road to Hell: In Bruges

“Maybe that’s what hell is,” Colin Farrell muses in one of his ubiquitous voice-overs in this recent cinematic gem: “an entire eternity spent in Bruges.”

As Farrell and his cohort (Brendan Gleeson) hide out in an unsuspecting Belgian town while recovering from a botched hit-job, we see various shades of hell.

There is the resounding guilt that Farrell goes through. There’s the life of a dwarf actor addicted to amphetamines and zingy one-liners. There’s the elephantine tourists.

And then there’s the silver lining thanks to Martin McDonagh’s wickedly dark comic talent-and gorgeous shots of Belgium’s answer to Venice.

Attention, attention: this next film will be M*A*S*H. The film that launched a thousand (fine, 251) television episodes, puts the audience in the passenger’s seat (of a stolen Jeep, naturally) to the journey of three civilian doctors drafted into the Korean War.

Much more than a typical “war is hell” flick, M*A*S*H is a series of episodes depicting ordinary people dealing with the distance from home-and sanity-as best they can.

The Fish Out of Water: Lost in Translation

Bill Murray is the tallest man in the elevator. He has to crouch to use the shower head. His translator takes a good five-second monologue and siphons it down to one, brief “No.”

He meets a match in Scarlett Johanssen and we get a poetic, atmospherically-charged tour of Tokyo under the same steady directorial hand that would take us through Versailles a few years later. Though Versailles has nothing on robots, Japanese game show hosts, or Suntory whiskey.

We don’t know what’s more iconic: the “squeal like a pig” scene, the prominence of Burt Reynolds’s moustache, or the dueling banjos with which this film will-in a knee-jerk reaction-always be associated.

Perhaps it’s Deliverance in and of itself. Losing the Oscar to The Godfather, John Boorman’s masterpiece speaks to the concerns of diminishing wildlife, the dangers of the southern U.S. backwoods, and why four city slickers in a canoe makes for a good survival story.

In the wake of the massacre at the 1972 Olympic Games in Munich, Eric Bana and his compatriots are sent out to seek vengeance on the members of Black September.

As attack groups and counter-attack groups chase each other around the globe, a new, ironic diaspora from one of the most fought-over pieces of land rises from the metaphoric rubble.

The Imperialist: Lawrence of Arabia

When asked why he didn’t win the Oscar the year he was nominated for playing this multiple award-winning film’s title character, Peter O’Toole simply said “They gave it to somebody else.”

Yet even though he didn’t take home the statue, the history books will remember the extraordinarily complex figure of T.E. Lawrence, and his cinematic double of O’Toole.

From imperialist to hero, Lawrence has been called many things, and his benefit to both Northern Africa and Great Britain is still largely questioned, reminding us that even the most seemingly selfish of travelers possess their own complexities.

Something to think about the next time someone tries to steal your window seat.

The Chase: North By Northwest

It’s not a travel movie roundup until we see Cary Grant being chased down by a crop-dusting plane. One of the best fugitive/spy flicks from the master of suspense is also the best film to showcase Mount Rushmore (sorry, National Treasure 2).

Maybe it’s due to the part where Eva Marie Saint is dangling precariously from its edge, but more likely it’s the part where Cary Grant dryly says “I don’t like the way Teddy Roosevelt is looking at me.”

We thought Teddy was giving us the stink-eye, too.

You know, it’s really unfair to pit Julie Andrews against Bo Derek. One’s Mary Poppins-slash-Maria von Trapp. The other is a corn rowed blonde who has a thing for hooking up to Ravel’s “Bolero” (something to think about putting onto your iPod before you reach the hostel).

Nevertheless, what better cure for Dudley Moore’s midlife crisis than to ditch the former and follow the latter on her honeymoon to Mexico?

Not only did this film show us how travel can be a great escape from the plagues of the real world, it showed us that Bo was an actress to watch, and that Dudley Moore’s career was nowhere near finished.

These are our picks, but any glue-sniffing pilot will agree that movie choices are deeply personal.

So tell us: what would you add to the list of movies that stoke our travel-lust?