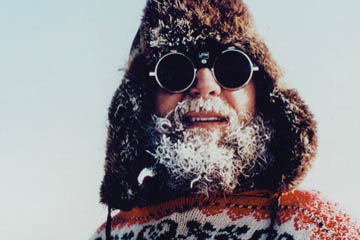 What’s been to both poles, the top of Mt. Everest and the surface of the moon?

The official flag of the Explorer’s Club, that’s what.

So why has hardly anyone actually heard of the Explorer’s Club if they’ve had such a big role in so many important expeditions? A loose organization of intrepid individuals founded in 1904, the club doesn’t talk much about what goes on behind closed doors.

Even so, they make it abundantly clear that lavish dinners, awards ceremonies and explorations to far corners of the globe are the norm for members of the Explorer’s Club.

A good portion of the 20th century’s most interesting and influential adventurers were members of this secretive society, and the organization itself had a somewhat shadowy and ill-defined hand in their most important expeditions.

To name just a few:

And that’s just eight, the club has at least three thousand members.

Like most ultra-elite associations, much of what the Explorer’s Club actually does is kept tightly under wraps.

Like most ultra-elite associations, much of what the Explorer’s Club actually does is kept tightly under wraps.

The members hold a degree of secrecy – events are invite only, and photos on their site are behind a members only login page. There are a few awards given out every year and dinners that journalists are invited to, but for the most part the club retains a relatively low profile.

The Explorer’s Club headquarters is a gigantic rowhouse in New York City, with bizarre rooms filled with elephant tusks and stuffed wildlife (check out the virtual tour).

They also throw some crazy parties. The biggest and best is the Explorer’s Club Dinner, held with great fanfare every year in New York. Members from all over the world give talks, showcase their work and schmooze with some of the most adventurous people on the planet.

Most famously, a buffet of epic proportions is presented to attendees, reportedly consisting of exotic delicacies like fried cockroaches and spiders.

In 1951 (and this has been confirmed by the club archivist), they even went so far as to include bits of woolly mammoth meat that had been languishing in Siberian permafrost for ten thousand years. The dinners sometimes include displays of exotic live animals, often endangered.

While it’s probably in keeping with the spirit of the events, they’ve been criticized for making them feel like Victorian carnivals and bringing to mind the specter of European colonialism. 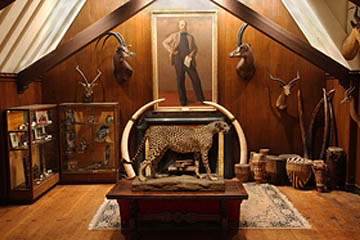 Want to join? Of course you do.

Unfortunately, your last backpacking trip to South America probably won’t get you in. The Explorer’s Club is all about hardcore discovery, and usually admits only serious scientists, adventurers and journalists.

“A Member is someone who has evidenced a sustained interest in some aspect of field exploration and has contributed in broad terms to the cause of exploration, which includes furthering the scientific knowledge of the world,” says the application.

While you probably don’t have to summit Everest or land on the Moon you’ll want some real experience under your belt. It helps to have a specialty – graduate or post-grad level fieldwork is always a plus, or even just volunteering on a few expeditions.

Club dues depend on how involved you are and the exact amount is kept under-wraps, but you can bet they aren’t cheap. Luckily, you can take part even if you don’t have time to discover new species of moss in the Andes or eat bugs in India.

The Club offers two categories for us normal folks: “A Friend is someone who does not possess the qualifications and experience of a Member or Fellow, but supports the goals of the Club” and “A Student Member is at least 16 years old and enrolled in an accredited school full time.”

Since full membership requires the sponsorship of two existing members, the club says this can be a good way to network.

The Explorer’s Club also hosts a good amount of intrepid tours through far-off lands, lead by scientists, adventurers and other people who actually know what they’re talking about.

These tours might cost a pretty penny, but they’re open to everyone and you can be sure you’ll get your money’s worth. Impressively, these include a tour to Bhutan, which is one of the most remote countries in the world and notoriously difficult to enter.

There are plenty of organizations for those with loose feet, but the Explorer’s Club is arguably more important than most. It might be secretive, exclusive and a little strange, but if you’ve got a thirst for adventure – you just might find yourself with a membership.

Have you ever wished to join the Explorer’s Club? Share your thoughts in the comments!