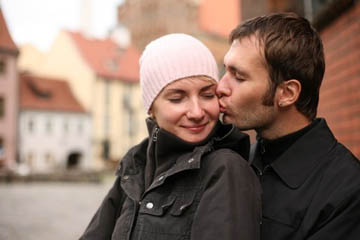 For single travelers, there is always an anticipation of meeting someone on the road. You wonder: maybe this special someone will be the love of your life?

My travel experiences have always been one big disaster in the love area. Some say planes are a good place to meet handsome men, but I either end up on a seat all alone, or next to a family packed with children.

On a few occasions I felt like asking the ticket agent, “Please, put me next to a handsome single guy.”

With trains, it’s the same story. Just the other day I was taking a train from London to Brussels and hoping to end up next to the most eligible bachelor on Europe. Instead I found myself next to a woman… with two kids sharing one seat…next to mine.

At the end the mother and I had to share the kids.

Love And The Law Of Attraction

When it comes to love, the law of attraction seems to promote that you get what you expect. Or to put it differently, your thoughts attract the outcome.

Well, I tend to disagree. My own experience shows that the law of attraction works differently where love on the road is concerned.

The two times I actually met someone with love potential while traveling, it came without a warning. It also came when I had a clear warning look on my face: not available.

The Man On The Train

On this day I was a student traveling in the train from Amsterdam to Brussels to study languages and recycle myself from a typical Russian into an advanced European.

My own experience shows that the law of attraction works differently where love on the road is concerned.

Meeting a man was really unexpected, because I was not what I call ‘wearing the most presentable appearance.’

I was sitting alone in a train compartment, wearing glasses (but no make-up) and feeling totally stressed out. I was trying to translate one political article from French into Russian.

The article was anti-Russian (in the field of politics) and so I was also feeling angry.

This combination of disheveled anger seemed to attract one particular guy. He simply opened the door, installed himself on the opposite bench and said: “I want to know you. I want to know all about you.”

The guy wasn’t a stalker. He was handsome, well-educated, totally cute, and studied medicine, also in Belgium. We talked for the whole two hours, until his station in Antwerp.

He asked for my phone number. He wanted to meet me again.

But here is where the law of attraction worked as expected – my thoughts attracted the outcome. At the time I wasn’t feeling ready. I was actually feeling awful without my make-up, and I didn’t believe that a guy like him would want to meet me again.

From Russia With Love

Here’s the story of the other train meeting, when I stumbled upon the most handsome guy. At that time I was still at school in Russia, and was traveling in the Moscow metro.

I was young, blessed with pimples, in love with George Michael and totally sure that I wasn’t even pretty in the slightest.

This was probably the reason that I behaved like an idiot when the guy started to talk to me. He was older, a student, and spoke French – the language I was studying in school.

But his flirt came so unexpectedly that not only did I not understand a single word of what he said in French (he invited me for a dinner, as I understood later), I also didn’t give him any chance to translate.

I was so nervous, I simply jumped from the train on the next station.

These experiences have left me with a thought: maybe we meet someone on the road only when we are ready, sure of ourselves and believing that might actually happen?

I won’t give up on this hope.

Next time I’m taking a plane, I will simply ask the ticket agent to put me next to the most handsome guy.

What have you found about love laws on the road? Share in the comments!

How to actually have fun on a family ski vacation
The ultimate fitness challenges for 2020 you need to sign up for now
How to maintain your dog’s health while living the van life
6 underrated cities in the US to celebrate Black history all year long
How to go backpacking with a dog, according to an expert