SEVEN STUDENTS STARED at me as I cocked and aimed the gun. We were huddled under a roadside awning, on a Sunday in June, to avoid thick sheets of tropical rain.

When I pulled the trigger, a paint-covered Nerf dart smacked against a road atlas on the sidewalk. I knelt to inspect the result — a fluorescent yellow splotch on southern Georgia — before tossing the gun to a teammate. The sun was rising rapidly; according to my stopwatch, we had two minutes and nineteen seconds to pick a location.

Our activity that Sunday relied on a simple premise: randomly choose a town in the South, then travel to produce true stories about the town’s most unforgettable characters. We called it “MapDart.”

A week earlier, I had pitched the MapDart concept in an email to students at the University of Florida in Gainesville, where I’m studying public relations. Surprisingly, the majority of respondents were non-communications majors eager to explore and meet new people.

Each person had one shot at the map.

Our team, which included an engineer, a psychologist, and a public health grad student, was diverse enough to play the subject in a “So, they all walk into a bar” joke.

Each person had one shot at the map. After the first dart was fired, I set a 20-minute time limit for choosing a town. With seconds to spare, Julie, a photographer, tapped her finger on the map and said, “Willacoochee, Georgia?”

We drove nearly three hours to Willacoochee, a community of fewer than 2,000 residents, because its name was fun to pronounce. (Try it — it’s like guiding your tongue through a jungle of syllables.)

Then came the hardest part: entering foreign turf and inserting ourselves into strangers’ lives. While there was no panacea, we thought asking around in a restaurant would be our best bet.

Mary’s, the only sit-down joint in Willacoochee, is located between a hardware store and an animal-feed shop. Aesthetically, it’s like an old hunting lodge: oak walls, picnic tables, a mounted buck’s head. Moving through the buffet line, I betrayed my Northeastern roots by asking the young server for what I thought were carrots.

“You mean sweet yams?” she said, cracking an awkward smile.

After we were seated, my teammates and I made small-talk with an elderly lunch crowd. Though the subject of aging can be morbid and taboo, the Willacoochee residents we met spoke warmly and nostalgically about growing older; they guffawed about fishing trips, pranks, and old high school crushes.

This dynamic stood out to me because I had begun to dwell on my own aging, following my 22nd birthday a few months earlier. I organized MapDart partly out of eagerness to pack memorable experiences into my twenties, while I still had the freedom to travel spontaneously.

If there was ever a man qualified to proselytize about aging well, he was George McCranie, the slim and agile 91-year-old whom we met inside Mary’s. After lunch, George climbed into his super-duty pickup truck and told us to follow him. He wouldn’t wait around, though, and I sped down a country highway to keep up. 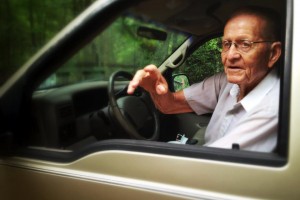 Mr. McCranie in his pickup

The faces of photographers in my car lit up as Mr. McCranie turned onto a dirt road, leading us into a lush clearing of pine forest, where log cabins surrounded an antique turpentine factory. In the distance, the clearing faded into overgrown grass, which swallowed the rusted chassis of a Model-T Ford.

George walked around a silo to the back of the factory and climbed a staircase. Stepping onto a wooden platform, he pointed toward two logs that stretched from the building’s edge to the field below.

“We brought our raw gum up here from them pine trees,” Mr. McCranie said with a deep, steady voice. “We worked ‘em, you know, and they ran turpentine into barrels. We’d roll the barrels up skid poles and all that kinda business. Barrels weighed 500 pounds a piece.”

I imagined a viscous brown goo, smelling like sugar and burnt pines, oozing into the containers.

George stepped toward the skid poles. His refined appearance — slicked-back hair, glasses, a crisp button-down tucked into khakis — underscored the years that had passed since he worked in the factory as a teenager.

During Mr. McCranie’s teens, Georgia was in the chokehold of the Great Depression. (“Y’all don’t know anything about the Depression,” he said, and he was right, considering that we had yet to recover emotionally from losing iPhone service.) Considering the circumstances, George’s father told George and his two brothers that if they wanted money for college, they would have to start working.

When word spread that three Willacoochee boys had taken over their family’s turpentine factory, some locals feared the factory would burn down, Mr. McCranie said. Yet, the brothers handled barrel after barrel without a slip. Only the demands of World War II disrupted their work.

“Guys kept getting killed and they needed replacements,” George said. “That didn’t sound like a good job offer to me.”

After being drafted to fight in Europe, George and his older brother kept producing turpentine in Willacoochee. Not only did they finance each other’s education, they saved enough to buy 11,000 acres of land and a few Model Ts (which sold for $12 to $18 apiece).

When Mr. McCranie’s older brother died, about 30 years ago, George and his younger brother were left with dual ownership of the family’s land. Mr. McCranie gave the factory, which is now part of the National Register of Historic Places, to his wife and two children. 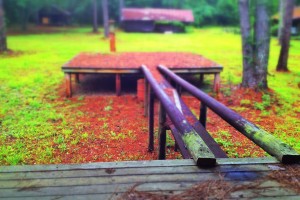 As George climbed down the factory steps with relative ease, I said, “Hey, what’s the secret to aging like you have?”

“A glass of whisky every day,” he replied, jokingly.

“Any particular type?” I asked, pretending to take notes.

“Some folks make a fuss about the name,” he shot back, “but you don’t need nothing expensive.”

Later that day, during the roadtrip back to Gainesville, I thought about the subtext behind Mr. McCranie’s playful response: there was no secret to growing older. If anything, what worked for George was to not overthink it. He managed the factory, and his family affairs, by setting and sticking to concrete, long-term goals.

Back in my apartment, I stored away the paint-splattered road atlas in preparation for MapDart’s next adventure. The yellow splotch on southern Georgia no longer represented a two-dimensional space; it evoked memories of sweet yams in Mary’s restaurant, farms, swamps, and an old turpentine factory that put three boys through college.

The next time I worry about turning 23, I’ll remember Mr. McCranie’s outlook. It propelled him through the Depression, through afternoons grunting against 500-pound barrels, through the eventual rise and fall of Georgia’s turpentine industry. If I start to complain about aging, I’ll imagine George giving me a glass of whiskey and a figurative, swift kick in the ass.