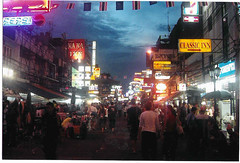 Every year, tourists flock to Southeast Asia, in hopes of netting the tropical ocean dream.

Khaosan Road, Bangkok’s backpacker coconut cream pie, proves that not only can you sleep for three dollars a night, but you can also be anyone you want in Paradise.

For some, this means picking up dreadlocks while exiting Watson’s pharmacy, and wearing more tie-dye than would fit in the back of a VW van.

For others, however, it means purchasing sexual services from a woman, man, or even a child, and imagining themselves as Love Gods.

One can smell a lot of things on Khaosan Road- patchouli, pineapples, Pad Thai, and as well, the more pungent odor of sex tourism- the question is, whether or not it’s all about peace, love and happiness.

Sex tourism, present throughout the world, is particularly prevalent in South East Asia, where the connected problems of human trafficking, AIDS, and poverty, continue to flourish and claim lives at unprecedented rates.

The Choice To Sell

Sex tourists, defined as “those who travel to a country for the sole purpose of having sex” see it as an opportunity, or even an entitlement, to have sex available for less money than they would pay at home.

Sex tourists tend not to differentiate between buying groceries, and going to the brothel to buy sex – both provide someone with economic sustenance.

They perceive that those involved in the industry are making a choice to sell their services.

Some even say they are “helping” sex workers, as other available labor, particularly for women, generally yields a lower profit. Sex tourists tend not to differentiate between buying groceries, and going to the brothel to buy sex- both provide someone with economic sustenance.

It is also true that some sex workers tend not to distinguish between sex work and other work, which may or may not be any less exploitative- the difference, is in the body parts used.

We Westerners, products of Christian influence, have moralized sex, unlike in some other countries, including some Southeast Asian nations, where it is seen in more neutral terms.

Many sex workers wish to provide services without judgment or police interference, and continue to fight for better protection within the industry.

As an English teacher in Thailand for over a year, I had the opportunity of having a closer look at the sex industry in Southeast Asia. 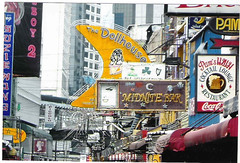 I felt that sex tourists, and brothel-goers in general, radiated a patriarchal sense of entitlement which, in the case of the foreigners, would not be acceptable, or even possible, back home.

Honestly speaking, women who envision a grand life for themselves and their children are not lined up for extra-curricular sex with some (excuse the cliché) foul-mannered, overweight, middle-aged, married, balding alcoholic- only the most vulnerable are really up for this job.

Many sex tourists, who wouldn’t even be eligible for a date back in Germany, Canada, Australia, or wherever else they come from, find solace in the fact that their money buys their egos back, at the expense of someone else’s health or happiness.

Money buys their egos back, at the expense of someone else’s health or happiness.

The gratification is not in the sex (for even the married ones have it right up there lying in the bed) but in the fact that they have monetary power, and society supports the idea that money can buy you anything, including a beautiful woman or girl.

This ideology reeks with dehumanization and confirms that men are mere providers of money, and women are subject to its rule. There is also plenty of gay sex-tourism, in which (mostly young) boys are exploited in the same way as women.

Sex tourism, then, is a tragedy, for both the sex workers, who don’t always choose to be there, and for the men who pay them.

I do not mean to say that sex tourism, or sex work, for that matter, is a black and white issue, and for those sex workers who love their jobs, I am no one to judge their choices or their profession.

However, we can’t ignore the fact that many people are smuggled and then forced into the trade, either by lack of any other option, or by pimps, or even by their family members, who may be desperate for a piece of the profit.

As well, the risk factors for sex workers are very high, and many succumb to AIDS and other sexually transmitted diseases. Those who seek out sexual services, particularly those who are married or in other relationships, risk the lives of their partners when they return home.

Some say that sex tourism is about sex, but I think it’s about power and opportunism.

While awareness and prevention is the key to preventing these unfortunate outcomes, it is a reality that many wives, girlfriends, and boyfriends still become infected with these diseases, due to the irresponsibility of their loved ones.

Some say that sex tourism is about sex, but I think it’s about power and opportunism. I am not sure we are reaching our human potential, as tourists and ambassadors of our nations, by contributing to additional social gaps in the world.

While it is true that sex workers make more money than working in the market, there are other, more effective ways to improve the lives of people, besides buying sex from them.

For those women, men and children who are trafficked, or bound to the trade by economic desperation, it seems hopelessly unfair that they should have to sacrifice the most personal areas of their bodies for the sake of someone’s vacation, ego, or fantasy whim.

Perhaps as tourists, and as people, before we depart, we might care to ponder not only others’ choices, but also our own, and what we want to make of them.

Emily Hansen is a travel writer and teacher based in Shimla, India, where she is working on a book about her experiences as an expat. Her native land is Canada, and she has traveled to over 30 countries, and has lived in six, including Germany, China, Korea, Thailand, Taiwan, and now, India.

What’s your view on sex tourism? Please share in the comments.