There is the smell of frankincense. Echoing voices sing ancient hymns. It’s Easter in Ukraine, and the Eastern Orthodox Church is continuing age-old traditions on the holiest day of the year.

Eastern Orthodox Christianity runs deep in Ukrainian culture. The numbers of Christian converts from Paganism grew with the expansion of the Kievan realm by Vladimir the Great, who converted from Slavic Paganism in 988 AD. The Ukrainian Orthodox Church reigned from the Kiev Pechersk Lavra, and like many religions, it has incorporated Pagan traditions and symbols during its centuries of evolution.

This faith tells the story of the Ukrainian people; it has survived communism and the horrific death tolls of World War II. It is a piece of Ukrainian culture that has stayed true to old-world rituals and practices and remains largely untouched at a time when much of the world is changing. 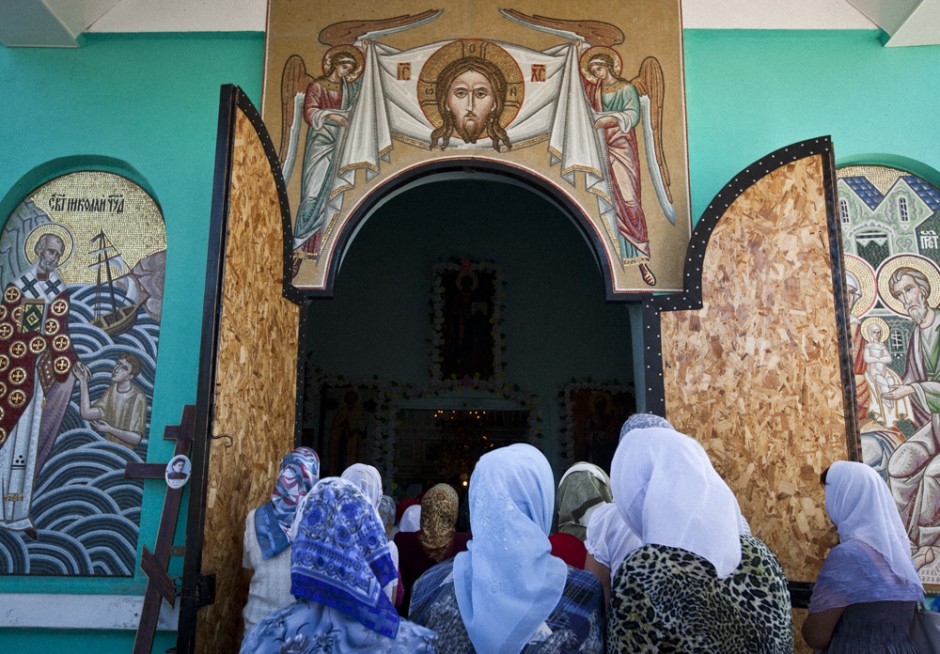 Women gather at the Old Believers church in Vilkovo, Ukraine, for the Transfiguration holiday celebrated each year on August 6th. In many Eastern European countries, including Ukraine, Transfiguration marks the beginning of the harvest. 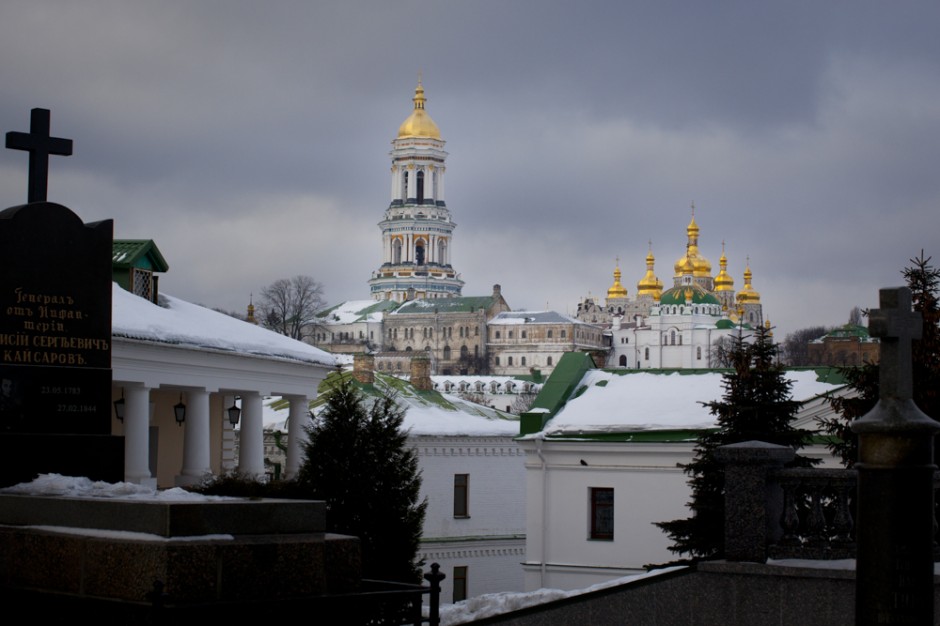 Founded as a cave monastery in 1051, the Kiev Pechersk Lavra remains one of the most significant Orthodox Christian monasteries in Ukraine. 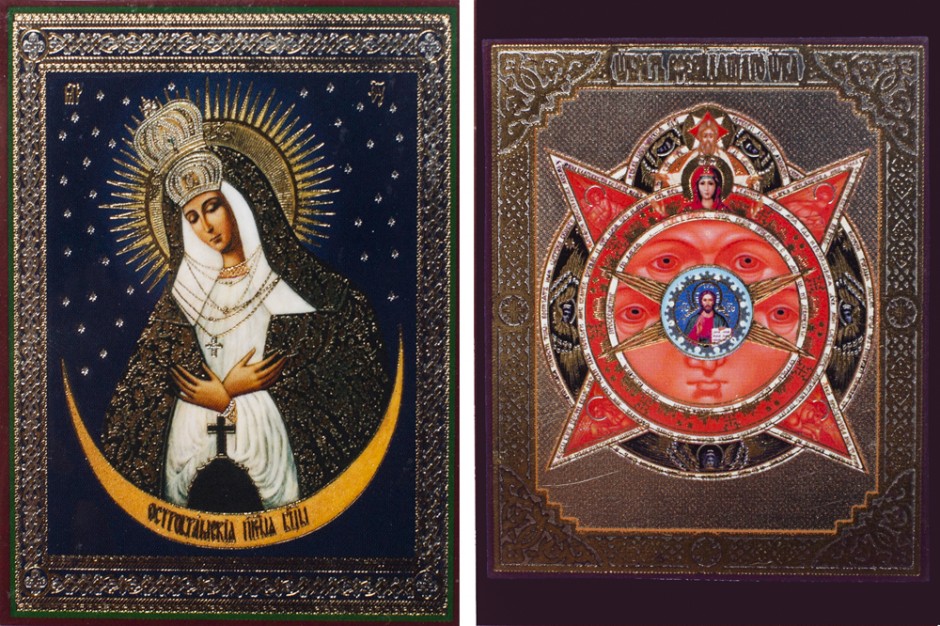 Prayer cards, available in most Orthodox churches, are used as symbols of protection and for prayer. Left: Our Lady of the Gate of Dawn, a Lithuanian interpretation of the Virgin Mary. Right: A Slavic mandala of the All-Seeing Eye, symbolizing the all-seeing eye of God. 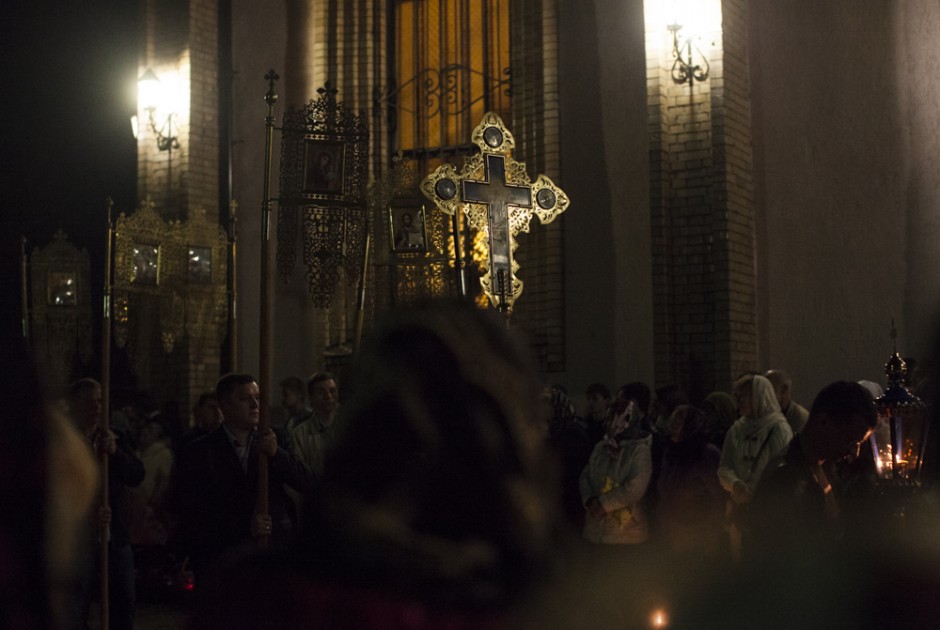 A cross, the most recognized symbol of Christianity, is carried by a church procession for Easter in Vishenky, Ukraine. With Easter being one of the most important holidays, preparations begin far in advance and include baking a special bread called paska and making homemade sausage. These items are packed in an Easter basket and taken to church early in the morning. The area is lit by candles being held by church members. Predating Christianity both in the East and West, it has been suggested that the cross symbolizes the sun or fire and has been an important symbol in ancient civilizations. Because it is a representation of an agonizing method of public execution, the cross was not often used in early Christianity. [1] 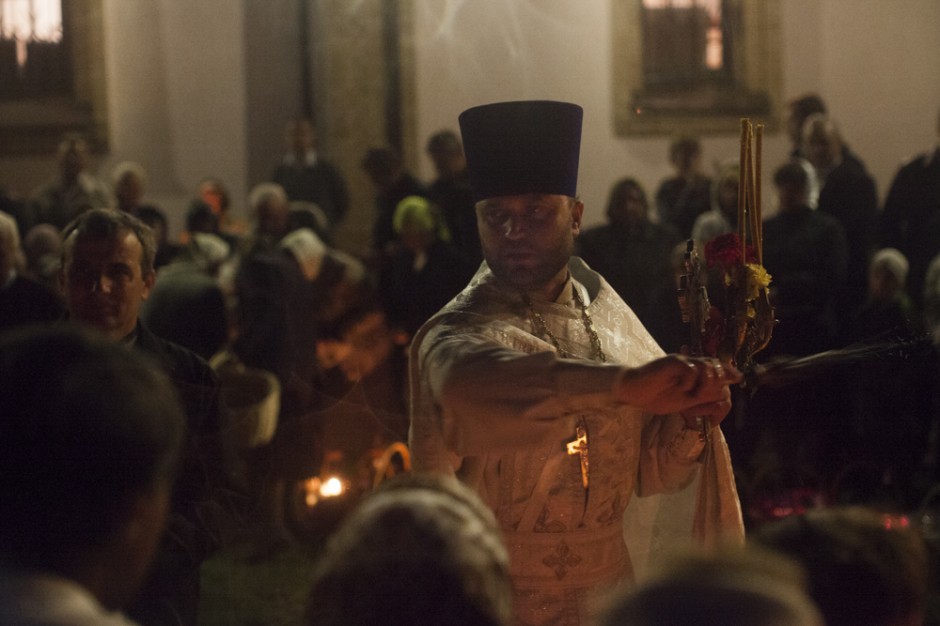 The father of the church blesses the baskets and the crowd with holy water flung from a bough of eucalyptus in Vishenky, Ukraine. 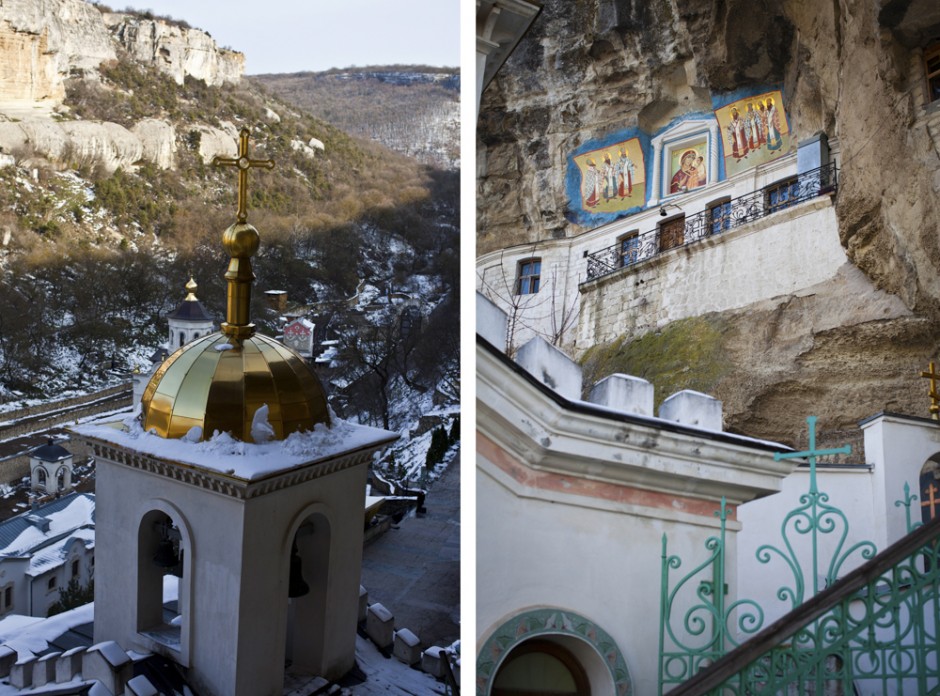 Assumption Monastery of the Caves

Built into cliffs in the ancient cave city of Chufut-Kale in Crimea, Ukraine, the Assumption Monastery of the Caves sits at the top of a steep hill overlooking a beautiful and desolate valley originally settled by Greeks. The local legend claims that an icon of Mary mysteriously appeared on the cliffs and was discovered by a shepherd. Though the local prince ordered it moved to his palace, each morning they would find it back on the cliffs and eventually erected a small chapel 20 meters up with a flight of steps to reach it. The current monastery was built in the 15th century, though the site may have had religious significance much earlier. Monks claim there has been monastic activity since the 9th century. 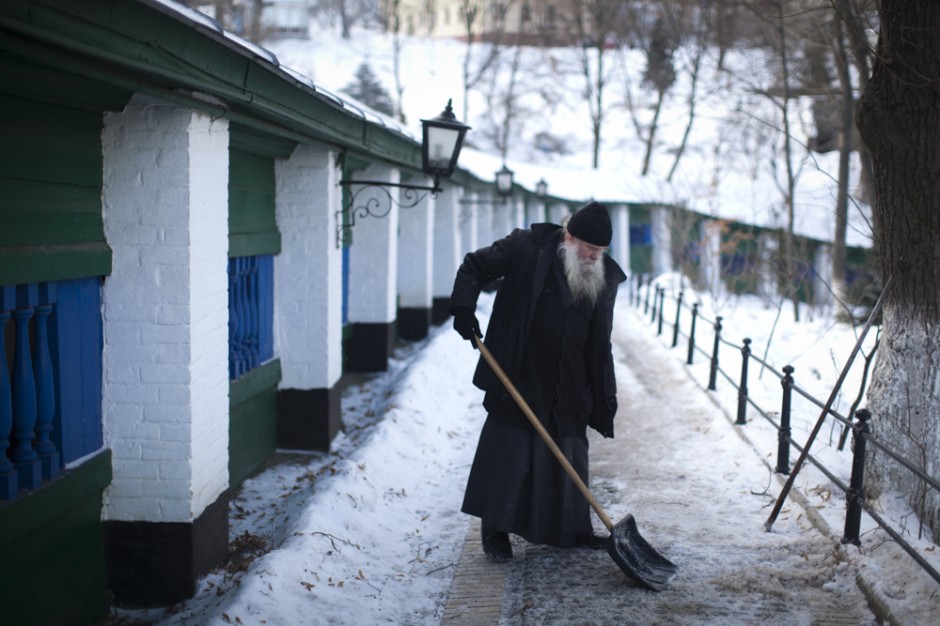 A monk of the Kiev Pechersk Lavra shovels snow in order to keep the pathways clear for the many guests who come to visit. Both tourists and pilgrims make their way to the church, one of the biggest attractions in Kiev. 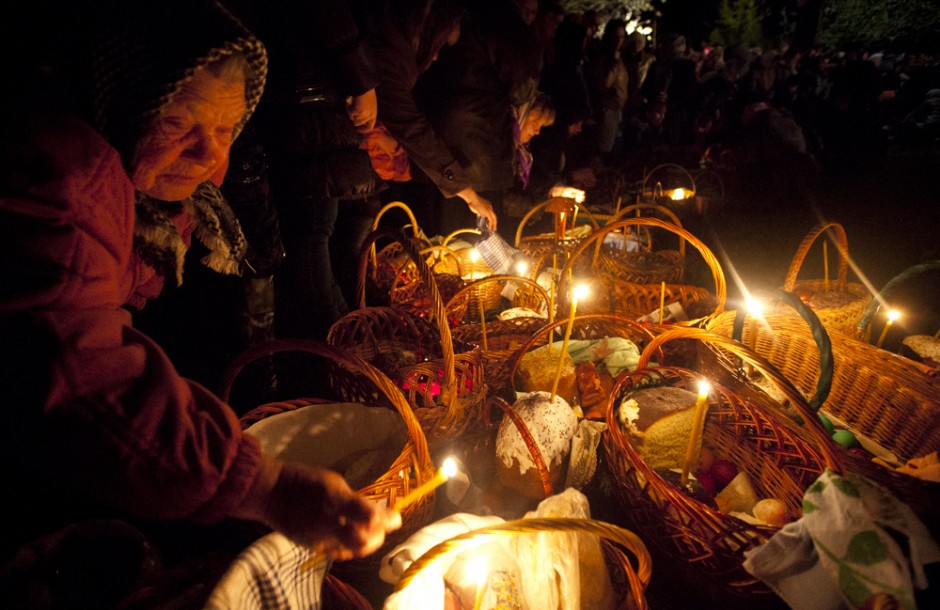 Baskets containing paska bread, eggs, and sausage wait to be blessed during early morning Easter in Vilkovo, Ukraine. Celebrating Jesus’ resurrection, Easter remains one of the most important holidays in the Eastern Orthodox faith. After the blessing it is customary to go home and enjoy a small meal before going back to bed. Many games are played during the day, including “egg tapping,” which involves two players holding an egg in their hand and taking turns “knocking” the other’s egg. The first one to have their egg broken loses the game. 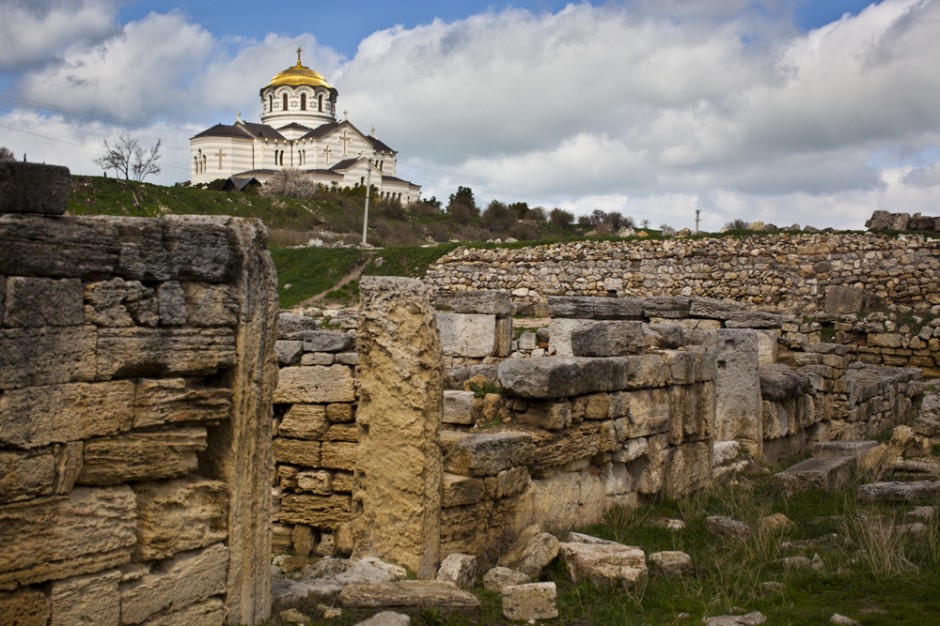 Founded approximately 2,500 years ago, the ruins of the ancient Greek colony of Chersonesus sit below the Saint Vladimir Cathedral on the shore of the Black Sea near Sevastopol, Ukraine. 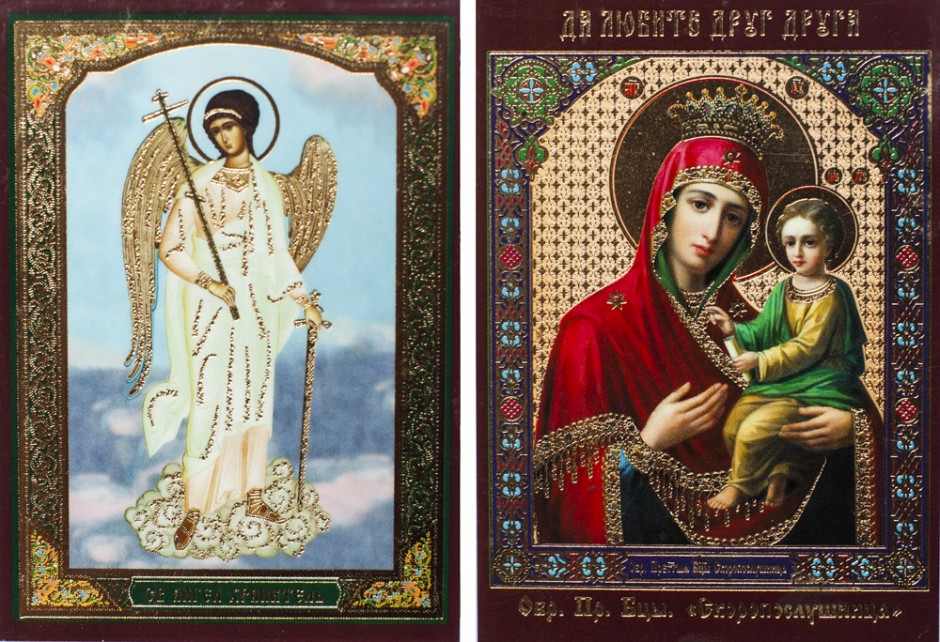 Left: The angel of protection. This card is often carried in people's wallets or pinned inside cars and buses. Right: Virgin Mother of the Lord with Baby Jesus. This card is the icon of the holiest prayer. 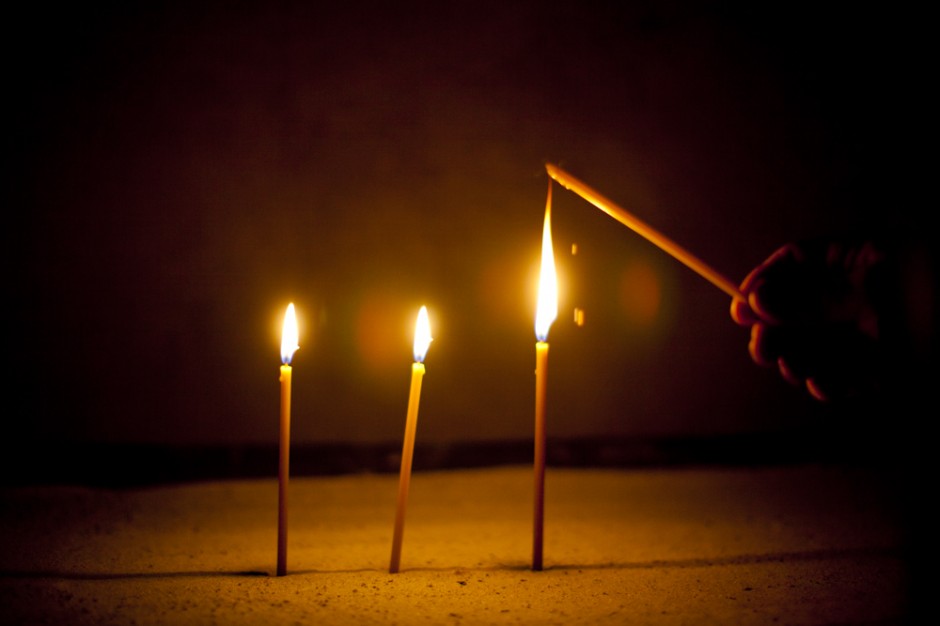 A beeswax candle being lit by a church-goer in Lviv. Pure beeswax candles are sold in most Eastern Orthodox churches and are often made from the combs of local hives kept on the grounds of the church. Adherents believe the pure beeswax symbolizes the purity of heart, the suppleness of souls, and the light of Christ within us. The purchasing of candles also serves as a financial offering to the church. Bee motifs are seen in many pre-Christian cultures, and bees were often considered a sacred insect that bridged the natural and spiritual worlds. 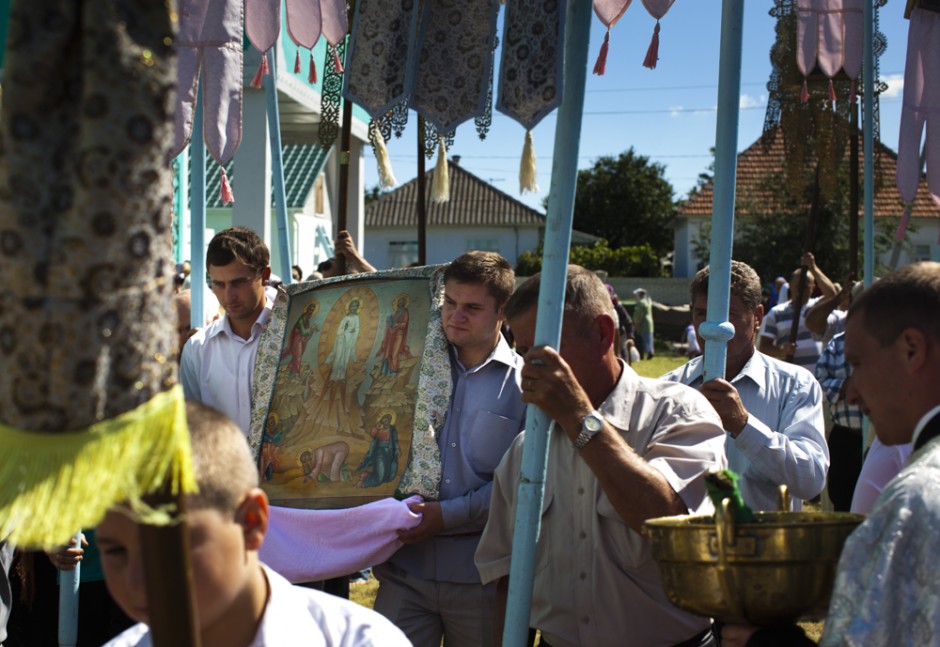 Residents of Vilkovo, Ukraine, walk in procession by the Old Believers Church, celebrating the Transfiguration feast. Followers bring fruits and crops like peas, potatoes, cucumbers, rye, barley, and grapes, which symbolize both prosperity and fertility.

Tagged
Travel Ukraine
What did you think of this story?
Meh
Good
Awesome