14:22 Mar 7, 2018
Top Countries
Top CitiesView All Destinations
Trending Countries
Trending Cities
Load More
Thoreau understood something that many of us modern day nomads would do well to recognize: travel is a matter of perspective, not location. 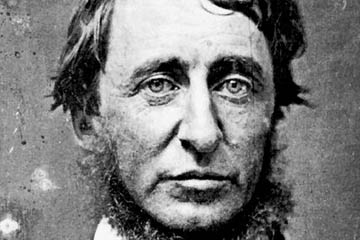 “I have traveled a great deal in Concord,” said Henry Thoreau, a native of…wait for it…Concord, Massachusetts.

In fact, Thoreau traveled far and wide for his day and age, vagabonding to Cape Cod and the vast wilderness of the Maine Woods. However, the great prophet of enlightened self-reliance claimed to have done most of his traveling in his own hometown.

Thoreau understood something that many of us modern day nomads would do well to recognize: travel is a matter of perspective, not location. With curiosity, an open mind and a broad horizon of free time, it’s possible to travel in your own backyard.

With curiosity, an open mind and a broad horizon of free time, it’s possible to travel in your own backyard.

I’m writing in El Calafate, a tourist boomtown in Argentine Patagonia. I am, admittedly, a long way from home. But, just the same, at the moment I’m not really traveling.

I’m in the common area of a hostel – two girls from Boston are shooting pool in front of me, and it’s hard to concentrate on writing when they bend over to take a shot. Sublime is playing on the stereo…Girl, Caress Me Down…. I’m wearing Patagonia brand clothes, but I’m not really experiencing Patagonia anymore than you are.

Neither, sadly, are many of my fellow tourists here in El Calafate. Every hour, buses segregated by wealth and nationality pull up to the viewpoint overlooking the Perito Moreno glacier.

Tourists disembark – they Ooh and Ahh in their respective languages, snap a few trophy photos, nap in the bus back to the hotel and fly thousands of miles back home on airplanes that belch carbon into the sky.

Meanwhile, the famous glacier shrinks, but that’s OK – I already have my ice-climbing photo.

What Makes A Traveler?

Now, the tourist / traveler distinction has already been beaten into the ground, and I’m not so sure of its validity in the first place. But it IS clear that coming all the way to Patagonia does not make one a traveler.

How did Thoreau manage to travel in Concord when so many of my fellow tourists never leave their comfort zones?

So what DOES make a traveler, I wonder? How did Thoreau manage to travel in Concord when so many of my fellow tourists here in El Calafate never leave their comfort zones?

Well, Thoreau rambled. He walked the country roads and stopped to talk to anyone he met along the way. He followed fox tracks through the snow, and wondered at their meaning. He approached the fields and homesteads of Concord with an open-ended sense of curiosity.

He looked at things, and thought about them, and tried his best to place them within the context of his broad experience. He moved slowly, and he paid attention. 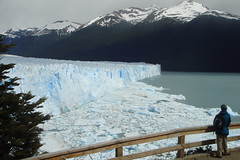 I remember one time, back when I worked an office job.

It was a Tuesday, and after work I just couldn’t take it any longer: with nothing but the clothes on my back I set off into the hills behind my house, trekked across the coal fields and into the valley beyond. The sun started to go down, but I just kept walking.

I came upon a small stream, which I resolved to follow until it led back to civilization. The night was dark, and there was no moon. I traveled by feel, my mind wide open, my nerves on edge. Once, I stepped on a sleeping turtle – and believe me, that was a shot of adrenaline on par with a virgin view of the Mayan Temples, the Egyptian Pyramids and even Angkor Wat.

Four times I came to dams, and had to scramble around them through thick bamboo grass. When I finally emerged into a village, covered in mud and cobwebs, it was past midnight.

The next day at work I couldn’t stop grinning. I had gone on a TRIP. Beyond that, I now knew what was Out There, over the hills, and by understanding what was Out There, I had a better appreciation for home and work – the comfortable routines to which I was able to return.

My carbon footprint for the journey? Zero.

A Sense Of Wonder

There is comfort in routine and stability, but when we stop traveling we lose the sense of wonder that equates to joy, that carves new channels in our minds and makes us feel alive. So go. Go on. Go.

Take a notebook and a pen and a camera – see what you find. Then come back, and tell me the story.

BNT contributing editor Tim Patterson travels with a sleeping bag and pup tent strapped to the back of his folding bicycle. His articles and travel guides have appeared in The San Francisco Chronicle, Get Lost Magazine, Tales Of Asia and Traverse Magazine. Check out his personal site Rucksack Wanderer.
Tagged
Narrative
What did you think of this story?
Meh
Good
Awesome