KUNGA IS A TIBETAN REFUGEE. Dressed in a checked shirt and a white jacket, she looks more suited to an office than a bush track. She is tiny with slender limbs; the small lines across her forehead make her look older than her 26 years. The bush track I traveled on in Dharamsala is nothing compared to the journey she made to get here.

I met Kunga by chance. The Indian monsoon lingered and the rain hadn’t let up by the time I finished lunch in the small, dingy cafe. The simple decor looked like it hadn’t changed since the 1950s. An awning over the narrow veranda kept the rain off the Tibetan monks who sat drinking and laughing in their maroon robes, unperturbed by the small river that formed along the potholed lane outside. Despite the rain, I couldn’t wait any longer. There was too much to see.

I ventured out past the teetering stalls and turned down a steep, narrow road past a shamble of houses and hotels and a small Hindu temple. An obscure path, almost hidden, drew me into the forest. The rain had stopped and a heavy mist draped the narrow track, decorated with Buddhist prayer flags. Some flags were strung directly over the trail, some deep within the trees, spreading good fortune to everyone as they flapped in the breeze.

A few people passed me; one girl stopped to talk. Noticing my fascination with all the flags, she said, “There many more up further. Come.” She took my hand and led me down the track. Then, Kunga told me her story.

…they travelled at night and hid amongst rocks during the day to evade capture or even death at the hands of the Chinese Army.

“I come here in 2006,” she began, referring to her escape from Tibet. Walking for 27 days with 83 others, including her younger sister, they travelled at night and hid amongst rocks during the day to evade capture or even death at the hands of the Chinese Army. The group spotted Chinese soldiers on more than one occasion. After about five days, Kunga and her sister had to abandon much of their clothing and food supplies as they were too heavy. “We think it doesn’t matter as long as we reach border. We so relieved when we arrive here.” The group worked together to survive; an older man shared plain, dry biscuits with the two sisters at mealtimes.

I thought I had been adventurous journeying through northern India to Kashmir. On the Rohtang Pass, mud and rock slides slowed progress so that it took nine hours to move five kilometres. No food, no toilets, traipsing through thick mud, hitching a ride on a local bus to catch up with our car that had sped on ahead and arriving at camp at 1am.

It seemed like a great brag to use at the next pub night back home.

Although it was challenging and exciting, it now feels rather uneventful when compared to Kunga’s journey. Like me, she had chosen to come to India, but for different reasons. As we stood on the soft shoulder of the track to allow a cow to pass, I asked her what drove her to take such a life-threatening risk.

“Survival and education,” was her speedy response. “My ambition is one day teach English to little children in Tibet.”

India has been good to the Tibetan refugees. Ever since the Dalai Lama escaped to India in 1959, over 150,000 refugees have followed, fleeing oppression by the Chinese who occupied Tibet in 1950. India has provided them with land and free healthcare and education, and has allowed a Tibetan government-in-exile. 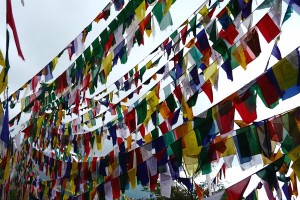 With three years of free Indian schooling behind her and currently studying computers and English, Kunga seemed unwilling to give up on her dreams, no matter what present situations dictated. Unlike me, she could not return home. Without a Chinese passport, she cannot leave India. Even in her exile she is not completely free.

There is something ironic in the fact that Kunga can’t get back over the nearest border but I can easily travel the 10,000 plus kilometres back to Sydney. The thought silenced me and made my endeavour to find prayer flags to photograph seem trivial. But Kunga marched on as if finding them was the most important goal she had.

As we walked, a family of monkeys sitting on rocks watched us, the babies scurrying out of the way, the adults ready to protect if they came to harm. I asked Kunga about her parents. “They still in Lhasa. Makes me very sad.”

She is able to talk to them on the phone, but the calls are infrequent and dependent on Chinese permission. “I have not spoken for over two month. Chinese very strict.” The actions of the Chinese are dictated by the behavior of the Tibetans. Any rebelling and the whole community suffers the consequences. Punishment includes a curtailment of “freedoms.” Very recently, a monk burned himself to death on the street, and this strong show of defiance has created the current clampdown on the Tibetans’ privileges, phone calls being one of them.

Kunga dreams of her parents coming to Dharamsala. “If just to see His Holiness, the Dalai Lama, but my father very old and this unlikely,” she explained. I would see my parents in just a couple of weeks. I hadn’t even really missed them yet, and started to realise the many things that I take for granted: seeing my family whenever I wish; going to most places in the world freely; being free in my country to express my thoughts and opinions.

We took turns pulling each other up by the hand, laughing, just two girls having fun.

Together we trudged up the hill, squelching deep into the mud, my sandals proving to be the wrong choice of footwear. We took turns pulling each other up by the hand, laughing, just two girls having fun. Upon reaching the top, we were surrounded by the movement and colour of uncountable prayers. I felt small but blessed standing within the enormous offering to the heavens.

Lhagare Shrine is where the local people come when the Dalai Lama is away. They pray for his safe return to Dharamsala, his home in exile, by spinning prayer wheels and burning juniper. The flags are all cut down and burned before the New Year. On New Year’s Day, a whole lot of new ones are strung up — red for fire, yellow for earth, green for water, blue for sky, and white for air. Each one displays the image of the “wind horse,” which transforms bad fortune into good. Soaked by the storm that recently passed through, they still fluttered and danced in a colourful display.

Wandering back into town past the Dalai Lama’s garden, little stones, still wet from the rain, were tucked into spaces in the wall where mortar or a brick was missing. I recognised the now very familiar Om mane padme hum mantra engraved in bright colours on each one. I asked Kunga to tell me exactly what it means in English. “I know the meaning. Very complex so can’t tell you correctly, so would be wrong to tell you anything.”

I respected her answer but it left me even more intrigued. I will have to keep searching for my answer.

Tagged
Narrative Dharamsala, India
What did you think of this story?
Meh
Good
Awesome

14 Laws From Other Countries That the US Should Adopt
Take Better Photos: 8 Landscape Photography Tips for Self-Taught Travelers
CLEAR Is Offering a Steep Discount for Couples and Friends Just in Time for Summer Travel
Hilton’s Vallarta Riviera Will Change Your Mind About Booking All-Inclusives
I’m a Professional Road Tripper. Here’s What I Never Leave Home Without.