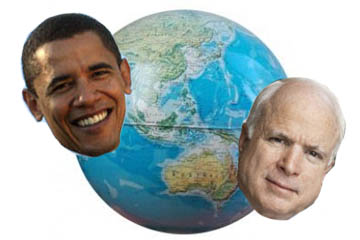 “Heading” around the globe.

In England, upon hearing my accent, I keep getting asked the same question – “Are you Canadian?”

Nothing about the way I speak sounds even remotely Canadian, even to English people with no previous experience with North Americans of any stripe. But I am from Texas, and I talk like Coach Taylor on Friday Night Lights.

It took a while before I figured out why they were asking – they were English, and as is characteristic of men and women of their country, they were just being polite.

Assuming someone is American can be downright rude.

It wasn’t always like this. There have been times, on and off since the Vietnam War, during which Americans have been widely beloved worldwide.

Even in the early days of the Bush presidency – particularly the dark ones following the fall of the twin towers – we were welcomed around the globe as pleasant guests, generous with our fat dollars to the point of over-tipping, acknowledged and adored by the world community for delivering them Tom Cruise and Puff Daddy.

But that was in the glory days before the world got to know us as the people who elected George W Bush. Twice.

All things pass. Tom Cruise is now more widely recognized in Europe as the public face of Scientology than for his film career; Puff Daddy has been Puffy, Sean John, P Diddy, and Diddy in the time since the Bush administration took office; and now the time has come for Americans to choose a new representative to the world-at-large.

The time has come for Americans to choose a new representative to the world-at-large. who’ll do a better job representing us?

Regardless of where you fall on the political spectrum, if you’ve been abroad much recently, you know that George W Bush hasn’t been good for our global image.

With the choices more or less officially narrowed down to John McCain and Barack Obama, a question for the American community abroad is: who’ll do a better job representing us?

One of the reasons George W Bush has given non-Americans a less-than-stellar impression of his constituents is a general – some would say proud – lack of intellectual curiosity.

Statements like “no one needs to tell me what to believe, but I do need someone to tell me where Kosovo is” generally made him, and by extension us, look ill-informed and stubbornly disinterested in changing that. 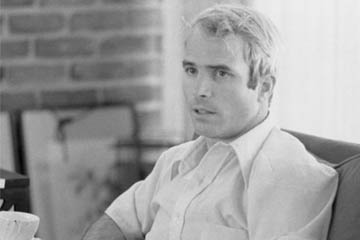 John McCain, while not prone to statements like that, seemed to show a similar lack of enthusiasm for exploring the world beyond the American borders before beginning his national political career.

The son of a military officer, he spent much of his childhood on naval bases in the Pacific, but upon returning to the US as a teenager, seemed content to stay home until his military service – at the very least, there’s no record or documentation for his travels as a young man.

In the Navy, he spent time abroad as part of his service – famously, he was in Vietnam for years as a POW – but the traveler’s curiosity is not a part of his persona.

Like McCain, Barack Obama was born outside of the continental US (McCain on a naval base in Panama, Obama in Hawaii) and spent some of his childhood overseas – with his stepfather in Indonesia. He also returned to the States as a teenager, and stayed put until his mid-twenties.

At this point, Obama’s story might seem familiar – at least in part – to a number of American travelers. 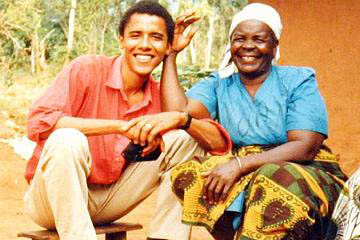 A young Barack Obama in Kenya

After graduating from college, before embarking on his career as a community organizer in Chicago, he spent two months overseas, in both Europe and Africa.

While his time in Europe was essentially a backpacking trip like visitors to this site might have enjoyed, his time in Africa included a good deal of time in Kenya, where he met for the first time his family on his father’s side, himself a native Kenyan.

These familial ties made trips to Kenya, as well as Europe and other parts of Africa, a regular destination for Obama.

Considering these experiences, along with Obama’s childhood time in Indonesia, and it’s possible to speculate on how these things may have influenced his worldview.

Unlike both George W Bush and John McCain, he’s not monolingual, speaking Indonesian (Bahasa) and some Spanish, and a firsthand understanding of how children in poor parts of the world live is an experience that would make him unique among American presidents.

Neither McCain’s experience on military bases nor as a POW (however inspiring it may be), does not seem to have offered his worldview a similar perspective.

Before their political careers started, it was Barack Obama whose passport more closely resembled your average American traveler’s.

As recently as 2000, when reflecting on his time in Vietnam, he has unrepentantly maintained that “[he] hates the gooks”.

Clarifications have made the claim that this is a reference to the specific men who tortured him as a prisoner, and not all people of Asian descent, but it’s clear that he may lack a certain sensitivity to people from other parts of the world.

Now, though, both McCain and Obama travel regularly as Senators.

It’s a part of the job, after all, and both have included trips abroad in their Presidential campaign itineraries – largely to court donations from typically wealthy expatriates whose pounds and euros trade high enough to make even a large campaign contribution seem downright modest.

But before their political careers started, it was Barack Obama whose passport more closely resembled your average American traveler’s.

That statement may be more than a little unfair to John McCain, however – Obama, six years old when McCain’s service in Vietnam and subsequent capture, had the option of spending his mid-twenties traveling the world.

John McCain was in a prison camp in the jungle.

Given the vast difference in both their experiences and their options, it’s up to the individual traveler to decide how they want those experiences to reflect back on him.

What do you think of the travel histories of Obama and Mccain? Share your thoughts in the comments!