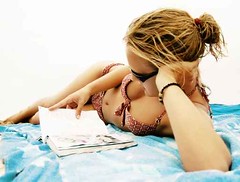 It was a sunny Sunday afternoon in Corte Madera, California, at the closing ceremonies of the Book Passage Travel Writers and Photographers Conference.

I was working on my fourth glass of complimentary champagne and talking to Matthew Polly, a faculty member and author of the travel/kung fu memoir, American Shaolin.

“Playboy!” I was saying, waving my glass for emphasis. “I don’t think I could even go into a store and buy a Playboy, let alone aspire to write for them someday.”

The problem I was trying to explain was this: ever since I had started seriously thinking about trying to make it as a travel writer, I had noticed that a lot of the best travel narratives out there were being published by men’s magazines like GQ, Esquire, Men’s Journal, and yes, even Playboy.

The magazine my idols were writing for, the one I should logically hope to write for someday, was kept under plastic on the top shelf at my local newsstand, right below the security camera.

Matthew Polly, who has himself written for both Playboy and Esquire, looked impressed. Or possibly weirded out. “I mean, does Playboy even publish articles written by women?”

“Sure,” he said calmly. “If your story’s good enough.”

Hearing him say that made me feel a little better about my future in the industry. But it didn’t answer the question that had first occurred to me when I noticed that one of the Best American anthologies had more selections from Men’s Journal than from all the big-name travel glossies combined.

Why is so much of the best travel writing today running in men’s magazines?

Why is so much of the best travel writing today running in men’s magazines? And conversely, why do women’s magazines abstain almost entirely from running quality travel narratives, sticking instead to “charticles” about beaches and fake tanner?

I emailed several well-known travel writers to find out.

At first I thought the connection between the big-name men’s mags and travel writing must be the popularity of adventure travel – the traditional domain of your stereotypical rugged outdoorsman, though of course that’s starting to change.

“Men like to think of themselves as the adventurer-explorer types, even if they spend most of their time in cubicles,” Benning told me. “It gets at that Hemingway archetype that’s still strong in North America today. Men no longer go through rites of passage rituals as they did centuries ago, but I think men still have a need to test themselves in the world, and travel and adventure is one of the ways men do that today.”

That made a lot of sense. But I was still wondering about all those travel narratives I’d encountered in GQ or Esquire that had nothing to do heli-skiing or canyon-running or dog-sledding or mountain-climbing.

What was driving the editors of men’s magazines to run these long, first-person narratives? Why didn’t the staffers at Elle or Glamour do the same?

And for that matter, what was stopping women’s magazines from running something comparable to the adventure stuff, using stereotypically “feminine” subjects?

The Edge of the Abyss 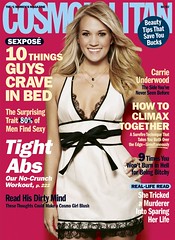 There was a tiny voice in my head the whole time I was thinking about this question.

The voice was saying, “Stop! Stop while you’re ahead! If you’re not careful you’re going to find out that none of your female peers want anything to do with thoughtful, intellectually-stimulating narratives about far-away places.”

Deep down, I was a bit afraid that the average Esquire reader was simply more engaged with the world than the average Glamour reader.

Thankfully, though, my interviewees all dismissed the idea. Tom Bissell, whose stories have appeared in Esquire, Men’s Health and Men’s Journal, and whose resume was one of the first to get me thinking about the question, suggested publishing tradition was more to blame than readership preferences.

“I would imagine that if a magazine such as O or Elle published a gritty travel piece about Burma, many of their readers would respond favorably. I think that men’s magazines publish such pieces more reflexively has a lot to do with the traditions behind magazines aimed at men, which are about an entirely different sort of wish-fulfillment than magazines traditionally aimed at women. In other words, we’re working within an eighty-year-old paradigm and don’t appear fully to realize it.”

Matthew Polly agreed that there was a different dynamic at work.

“I think women’s magazines tend to trade in envy rather than desire,” he told me when I contacted him for a (sober) follow-up to our conversation at Book Passage. And he suggested that the serious content in men’s mags was partly required to balance out the smut:

Clearly, there are plenty of women out there who are interested in travel, and in longer, intellectual magazine articles.

So clearly, there are plenty of women out there who are interested in travel, and in longer, intellectual magazine articles. I was relieved, but I still didn’t have an answer to my question.

It was David Farley, a travel writer who has contributed to both Playboy and GQ, who got me thinking about male and female spending habits.

He noted that women buy more books (and presumably, magazines) than men. But, he suggested, different magazines serve different purposes for their female readers: “Magazines like The New Yorker, which is a general magazine and read (I suspect) by as many women as men help fill the void for interesting travel narratives that women’s magazines don’t supply.”

Polly agreed, suggesting that there is a difference in the way men and women consume magazines:

“Men read magazines in far fewer numbers and less frequently, but when they do they want to feel like it was really worth their time. So men’s magazines have a smaller, more selective market, kinda like HBO. Whereas women’s magazines are more like network TV, because the audience is bigger and less critical. I watch women on airplanes and they will have half-a-dozen magazines that they flip through quickly. A man will have one.”

I pondered Farley’s suggestion about subject-specific female reading habits, combined with Polly’s (extremely accurate) observation about the number of magazines women go through on your average flight. Was that the answer?

I decided to conduct an unscientific survey of one woman’s magazine readership: my own. I knocked the dust off the stack of magazines that have accumulated next to my bed in the year since I moved in, and counted them up.

My dearly departed Jane led the pack with seven issues, while In Style, The New Yorker, Glamour, Vanity Fair, and The Walrus had two each. Rounding out the pile were single issues of Outside, National Geographic Traveler, Cosmopolitan, Harpers, The Atlantic, People, Travel and Leisure, Vogue, Outpost, and Elle.

Quite the mixed bag. The GQs and Esquires of the world cover everything from gadgets and girls to books, politics, and travel. But their female equivalents, the Glamours and In Styles, really don’t get much beyond hair, make-up and clothes – hence my varied magazine collection.

When we want to read about the arts and current affairs, we buy intellectually-oriented generalist publications. And when we really just want to read about shoes, handbags, and Nine Ways To Blow His Mind, we buy women’s magazines.

Can it really be that simple? I don’t have all the answers, but whatever the reason it looks like I’ll have to come to terms with men’s magazines if I want to make it in this business.

If anyone gives me trouble when I’m perusing that plastic-wrapped top shelf, I’ll just have to tell them: it’s for the articles.

Why do you think there’s never quality travel writing in women’s magazines?

Eva Holland is a historical researcher and freelance writer based in Ottawa, Canada. She is a blogger for World Hum and for Rolf Potts’ Vagablogging, and her travel writing has appeared in The Ottawa Citizen, The Edmonton Journal, and Matador Travel.
What did you think of this article?
Meh
Good
Awesome
Bookmark
Posted In
Travel