02:48 Jul 9, 2020
Top Countries
Top CitiesView All Destinations
Trending Countries
Trending Cities
Load More
John McCain is angry, confused and out of touch. He must not succeed in blocking important political change in America. 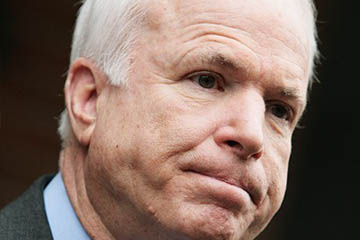 If elected, chances are that John McCain would preside over disasters far more bloody, expensive and misguided than those of President Bush.

McCain sees himself as a warrior, eager to go down fighting in a blaze of glory, destroying his enemies without mercy. He’s a gambler.

It’s easy to imagine McCain in the Oval Office, grumbling like Nixon after a bad day, ordering the Joint Chiefs to ‘bomb the enemy, wipe ’em out, get the nukes ready, we’re going all-in.’

After witnessing one too many of McCain’s furious rages, a Republican Senator famously said, “I didn’t want this guy anywhere near a trigger.”

John McCain’s eagerness to go to war is the wrong answer at a time when we need international cooperation to solve tough problems like terrorism, economic crisis, and climate change.

John McCain’s eagerness to go to war is the wrong answer at a time when we need international cooperation.

Even more troubling, however, is the fact that McCain is confused about the identity of the enemy.

McCain forgets who American troops are fighting against and where. He has an idea of some amorphous, terrifying and depraved enemy, and he’s willing to drop nuclear bombs to destroy that threat, but he doesn’t have a grasp of the real dangers of the 21st century.

John McCain is simply out of touch.

Economic cluelessness is just the tip of the iceberg.

Decades spent flying on his wife’s private plane from Washington meetings straight to one of his luxury vacation homes has kept McCain in a sheltered bubble of wealth.

All the man can do these days is stand in front of bright lights and say things like “The fundamentals of the economy are strong,” or “We’ve made great progress economically” under President Bush – clueless statements only a rich, corporate Republican could believe.

“I Hate the Gooks” 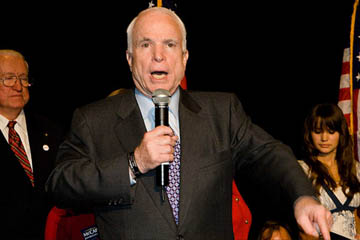 McCain on the mic.

McCain’s experience as a prisoner of war in Vietnam is often cited as proof of his credentials. Sadly, his time in prison also made him hateful and prone to fits of rage.

Do we really want a President who stands by his statement “I hate the gooks” conducting diplomacy with Asia?

Does a man who allegedly calls his wife “you cunt” and “trollop” have the moral character to serve as President?

Incidentally, does anyone use the word “trollop” besides angry old aristocrats and English Lit. professors?

America is blessed to have the best military in the world, but we must choose our battles wisely. As thousands of grieving American households know all too well, rash decisions and unnecessary wars have bloody and expensive consequences.

American bombing can save lives and create peace, as it did in Bosnia, or it can precipitate genocide, as it did in Cambodia. John McCain has made one thing clear: he will not hesitate to bomb countries regardless of whether or not they ever actually attacked America.

I’ve had too many friends die in Iraq to think more reckless bombing is a good idea.

I’m confident Americans will elect Barack Obama in November. Obama is a true statesman with the potential to become the most inspirational president since JFK.

But I’m worried, because McCain is letting Bush political veterans run the sleaziest and most dishonest presidential campaign in modern history.

John McCain will go down fighting. Let’s hope he doesn’t get the chance to take America down with him.

This is a critical moment in history. We must work hard to elect Barack Obama. Please, call your friends and family and tell them why their vote matters.

Are you traveling now? Please read 7 Things Americans Abroad Can Do For Obama.

If you haven’t already read up on Obama’s policies and character, please visit BarackObama.com.