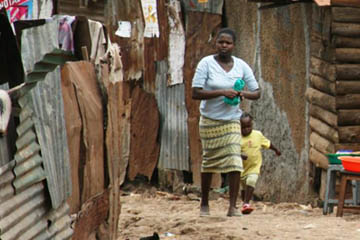 One of the first pieces of advice I received before leaving on this reporting project was from an Ethiopian diplomat in the States who requested that I “not be a typical journalist” in my coverage of Africa.

What he meant was that he didn’t want to see any more stories about African poverty in the news.

“Why don’t you write about positive things, like investment opportunities,” he suggested cheerfully as we toasted with Ethiopian honey wine in his spacious suburban home.

This is an increasingly common attitude in the media world as well, one I’ve even heard myself espousing at times. The concern is that coverage of Africa has been reduced to abstract misery; conflict, disaster, and of course, shocking poverty.

This numbing loop has left many Westerners dulled to images of violence and need.

A few days ago I had drinks with an American correspondent in Nairobi who said she felt that Americans were tired of images and descriptions of African poverty, that they no longer made an impact. Her answer was to focus her reporting on the Kenyan middle class as a way of humanizing African citizens.

This is another conversation I’m familiar with, one that pokes fun at reporters that go looking for the news clichés of “babies with flies in their eyes,” or “mothers that can’t find enough food to feed their families.”

Before judging reporters for their insensitivity, keep in mind that our job is to get stories into the media and ensure a last impression.

Before judging reporters for their insensitivity, keep in mind that our job is to get stories into the media and our hope, most often, is to ensure that those stories will make a lasting impression when you read them over your morning coffee.

This is a job that often requires unsettling ethical calculations as we strategize ways to convince editors to take another story about infant mortality, and whether that story will emotionally resonate with our relatively comfortable audience thousands of miles away.

Recently a piece I wrote comparing my water-wasteful lifestyle in the United States with the stories I’d reported of water shortages in rural Ethiopia–specifically how one father had lost four children to waterborne diseases–was classified by one reader as just another “guilt trip.”

Yet most of the reporting our team has done on this trip has centered on the larger environmental and political explanations for water shortages and water-related problems in eastern Africa.

African poverty has certainly made appearances, but it hasn’t seemed like a crucial focus of our work. That is, it hadn’t until I visited Kibera township.

The Face Of Poverty 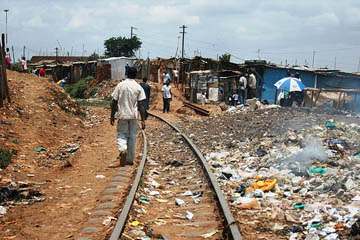 I traveled on a series of crowded matatus (minibuses) blaring African rap and boasting stickers declaring “Kibera ni Moja–Kibera United” and ended up in one of the world’s largest slums.

It was about 7am on a Saturday when I arrived at one of Kibera’s many entrances. Despite it being the weekend I watched as an endless line of people passed on foot in the still faint dawn.

I stood quietly as Nairobi’s factory workers, maids, cooks, nannies, security guards and drivers entered Kibera at the end of a long nightshift or trudged out for another day of work.

There was no hard news reason for me to be here. The post-election violence that put Kibera on the media radar this winter was long over. The displaced people were still displaced and the burned homes stood in charred ruins.

All that was left for an American reporter to see was the cold reality of life in one of the world’s most impoverished communities.

Life inside Kibera, whether journalists and editors deem it worth repeating or not, is a desperate affair for those that call it home.

The Kenyan rainy season has begun and the tiny paths that connect homes and businesses have turned into a slippery clay-like sludge. Open sewers flood with human waste, corroded pipes unload brown water into backyards, tiny kids dressed in almost humorously ill-fitted and tattered outfits chase each other over mountains of shredded plastic bags and scraps of rotting food.

Kibera has been growing steadily since it was first settled by Nubians brought here to build the country’s railroad, and a century later it is home to an estimated million people who still live without basic services.

The Kenyan government is hesitant to legitimize illegally squatted land. That means there is no sewer system, no garbage pick-up, no piped water, no regular electricity and no government schools.

It means that residents, most living on less than one U.S. dollar a day, must fend for themselves without any illusions that their government or the rest of the world cares.

And before I lose my readers’ attention with generic descriptions of urban squalor, before you decide–as I have on occasion–that this story has been told and doesn’t properly represent life in Africa, or think privately to yourself that there isn’t much you can do and anyway, “the poor are always with us,” let me place these scenes in the terrifying context they deserve.

The United Nations Population Fund estimates that 1 billion people live in slums like Kibera. That’s one in every six people in the world. In Nairobi it’s 60% of the city’s population.

I was looking at the makings of the permanent underclass required to support the polarized global economy we are shaping today.

The UN predicts these numbers will double over the next few decades.

Given this perspective, investment opportunities and Africa’s “middle class” suddenly don’t seem like the most relevant stories to tell here.

The other day, as I stood in a cloudburst on a muddy hill above the train tracks that cut through Kibera and looked out on a landscape of rusted tin roofs, I couldn’t shake the rising fear that I was looking into the future.

I felt beyond a shadow that I was looking at the makings of the permanent underclass required to support the polarized global economy we are shaping today.

And I wondered if we, citizens in the rich world, hadn’t already steeled ourselves to this cruel reality. If this callous resignation isn’t the reason why we’ve tired of reading about twenty-first century poverty before the magnitude of it is even realized.