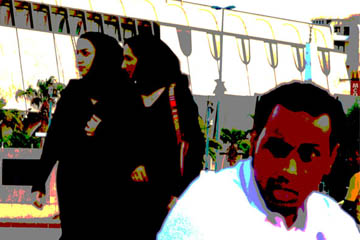 “Ladies and Gentlemen, we have just entered Saudi airspace, if you need to change into the appropriate clothing, now is a good time to do so.”

I had heard this announcement would be made on the flight, but I had cast it aside as one of those travel myths; when visiting other cultures, the reality rarely matched what the media, or other people told you.

Several women stood up and headed towards the bathrooms to change.

After landing in Jeddah, I boarded the bus the the terminal. As I took my seat, a Saudi man caught my attention. He rose from his own seat and gestured to a standing woman. She refused the offer with a polite shake of her hand.

The man asked another, refusing to sit until a woman finally accepted his offer. Looking around the bus, each woman wore a black abaya, covering them from head to toe. I wondered if they would prefer to remove their adornments, rather than have a seat.

The terminal building was awash with white traditional thobes, and red chequered khiefahs of Saudi men. The only women were those Westerners I had seen on the plane; now pushing their luggage toward awaiting cars.

The black-robed figures navigating the terminal were to be a brief introduction to what I would see in the Kingdom, and a constant reminder of an issue that I would struggle to understand.

As I walked along the seafront in Jeddah the first evening, I was surprised to see a busting social scene among the locals.

I found a small irony in the colours that so obviously divided the Kingdom.

Men and women walked together along the Cornice, others brought blankets and small picnics, lying on the beach as the sun set.

Children screamed with delight as they enjoyed the camel or donkey rides with their parents looking on close by, while some couples walked along the sea front; others sat on the sea wall while their children played on the sand.

This could have been any beachfront in the world, were it not for the abaya covering each women. “It is just clothing,” said Mohammed, one of our escorts in the kingdom, said “it doesn’t affect what’s underneath.”

Signs declaring “Family Entrance”, “Singles Only” and “Strictly Men Only” appeared in almost every public place. Restaurants would often have separate doors so men and women would not even pass each other as they made their way to separate rooms.

Looking down from the third floor of a shopping centre I was surprised to see how strictly, and obviously, this rule was enforced: the white dress of the men filled one side of the seating area, and the black abayas of the women the other.

I found a small irony in the colours that so obviously divided the Kingdom.

Saudi customs dictates that men and women should not mix. This made it difficult to gain a Saudi woman’s perspective on their life in the kingdom, so I searched elsewhere for debate. 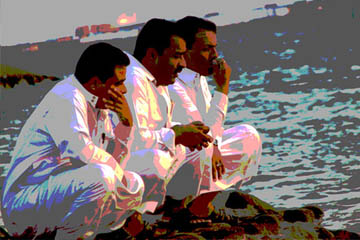 A letter in the English newspaper Arab News provided me with one insight: “Music, socialising… men and women in the same place” wrote a Saudi female university student about coffee shops such as Starbucks “with so many sins in one place, I think they should be banned.”

Without doubt, many women opposed to their lifestyles are unable to speak out. But even this simple comment made me realise that trying to console my own views with those of Saudis would be a fruitless exercise. “You can’t compare Saudi to Western states” was a phrase repeated in many articles on the region.

But judgment can also be made the opposite direction. Among the statements of devotion to Islam in the newspaper, I also found this sickening opinion:

“Western clothes can make young girls appear sexy,”wrote one man in the letters page of Arab News. He went on to say that the abaya should be worn by girls as young as six, to avoid this distraction.

“Before I went to Britain, all I knew about Western women was what I saw in the movies. You know what I mean?” said Wahid, a local hotel manager who had visited Britain a few years ago. “I now know women in the West don’t always think about sex. I know there is more to them than that.”

Although as our conversation continued, it became clear that he didn’t consider there to be much more.

“A good Saudi woman belongs in the home. She enjoys to cook and to sew. Why does she need to go out, play sport or drive? She enjoys a life with her family.”

A good Saudi woman belongs in the home. She enjoys to cook and to sew. Why does she need to go out, play sport or drive?

As our escort Mohammed explained later, this view of women was not universal. “My wife is the director of a children’s school and I think some people think women do not need to work, but this opinion is slowly changing.”

(Contrary to popular belief women are allowed to work and can even hold positions of authority, as long as it is only women below her).

“Women now carry ID cards and have the opportunity to access their finances (whereas before, only male members of the family would have access to a woman’s savings – if they had any at all). They are also running in local elections. There is even talk about allowing women to drive, but this will only ever be just talk, I think.”

Just a short drive from the city of Jeddah is a series of private beaches. With high walls and private security, ex-pats can enjoy swimming and sunbathing without adhering to Saudi’s strict dress code.

During a visit to one of these beaches to snorkel in the Red Sea, I was noticed none of our Saudi guides leered at the women that walked around in bikinis. With my first sight of female flesh in over a week, I’m ashamed to say I could barely look away.

A simple trip to the beach opened my eyes to how many men must feel here:

An unmarried man in Saudi will never see the face of a woman to which he is not related. With arranged marriages the norm, a groom will see his bride’s face for the first time only after the ceremony. The bare arms of a woman is as unknown and holds as much mystery as any other part of her body.

Have you had similar feelings of disconnect with other cultures? Share your thoughts in the comments!