AFTER SIX MONTHS of education protests, most of the students here in Chile whose universities and high schools have been en toma (taken over by the students) have “lost” the year. That means they won’t graduate this year, they won’t move on, they won’t start their internships or take the PSU (the entrance exam for universities in Chile).

And while you would think that people might be fed up with the proceedings–and there is a fair amount of disdain for the violence that sometimes accompanies the protests–there is still strong support for the movement on the part of the students, their parents, and across wide swaths of society. This Sunday, a “family march” was convened, and some forty thousand participants marched peacefully from Plaza Italia, to Parque de Almagro, where there was a concert with Chilean favorites, such as Chico Trujillo and Manuel García, sympathizers with the student movement, performing.

Camila Vallejo, the spokeswoman for ConFECH, a student group from the Universidad de Chile, and the movement’s de facto leader, spoke harshly against making deals with the government that do not address the student demands, which, in part, oppose profiteering in education. Her presence at the march was met with media frenzy, as dozens of photographers swarmed the group she was marching with to get a photo of the charismatic communist party supporter, who at 23, was born just as the plebiscite to get coup-installed Pinochet out of power was being held. 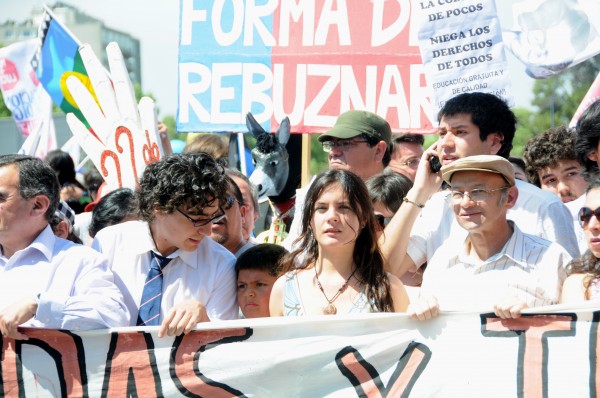 In many ways, Vallejo (or “La Camila” as everyone calls her here) is the perfect representative of the movement. In addition to being well-spoken, her youth puts her squarely within the average age range of the protests we’ve seen over the past several months. Protests are mainly populated by school-aged kids, usually in their teens and 20s, and Sunday’s march had a strong student contingent. But this march was for families, and parents and kids were out in full force under a beating sun to march for education rights. 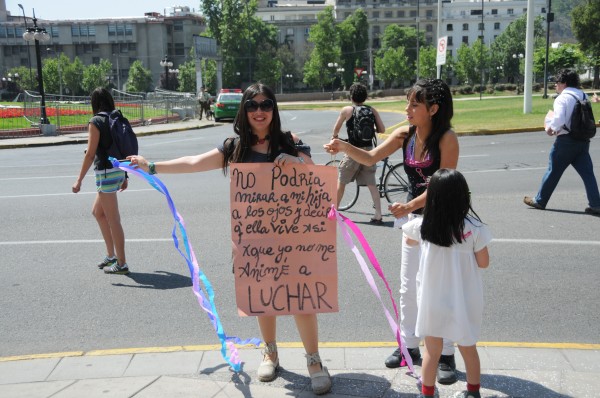 Sign reads: I couldn't look my daughter in the eyes and say that she's living like this because I couldn't be bothered to fight.

And the signs the parents held said it all. They’re doing it for their kids. University is only about sixteen years away for these three-and-unders pictured below in their parents’ arms and on their shoulders, and without a change in education policies and pricing, many of them would be closed out. In a country with a locked-in upper class, education is the most probable road to superar or “getting ahead,” and these parents want to make sure their kids have opportunity.

Everywhere I looked, there were kids. 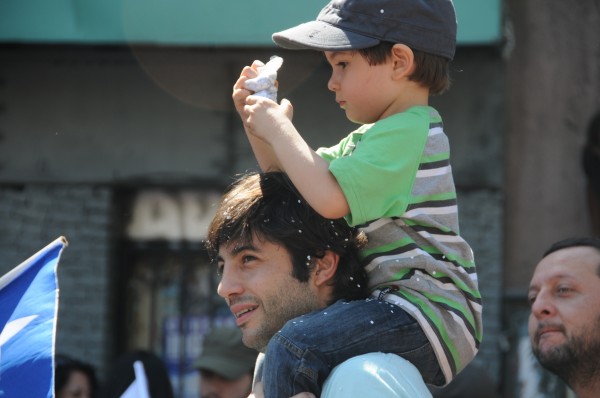 Dumping confetti on dad's head on the Alameda, or main street of Santiago 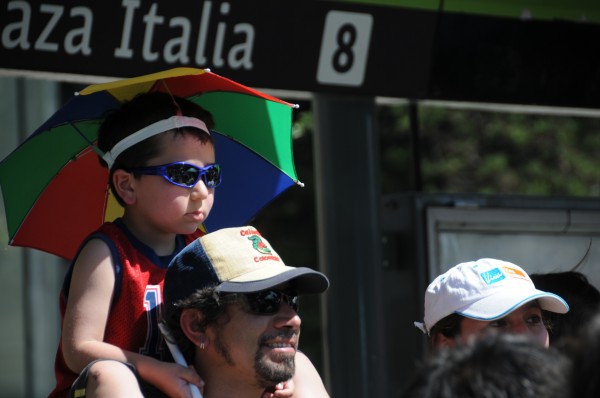 Advanced sun protection for this child under a Plaza Italia bus shelter on the march route. 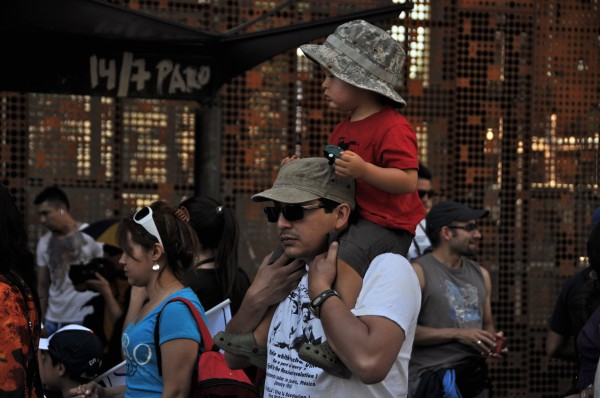 A floppy hat keeps the sun of this boy's face during the march. 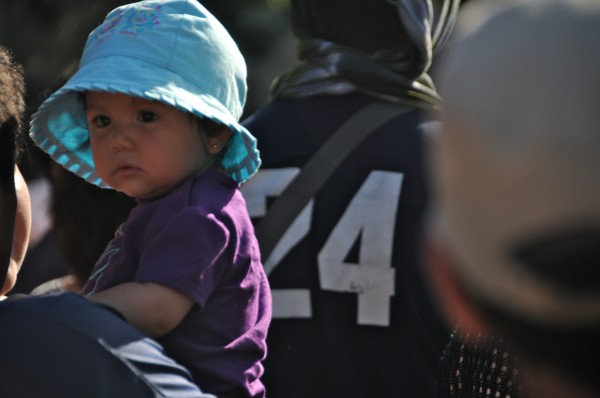 Hours into the protest, still awake. 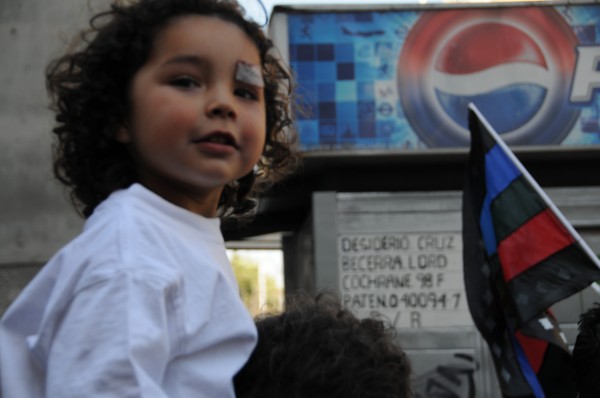 Curls and sitting way above the crowd at the march.

And when the day got too hot, and we’d turned off the Alameda to walk south on Lord Cochrane to head towards the Diego de Almagro park, shouts of agua, agua rose up from the crowd as sympathetic neighbors on this downtown street filled up whatever vessels they had, from water bottles to wash basins, pots, and in one case a baby bathtub to hurl water from several stories up onto the parched crowd. 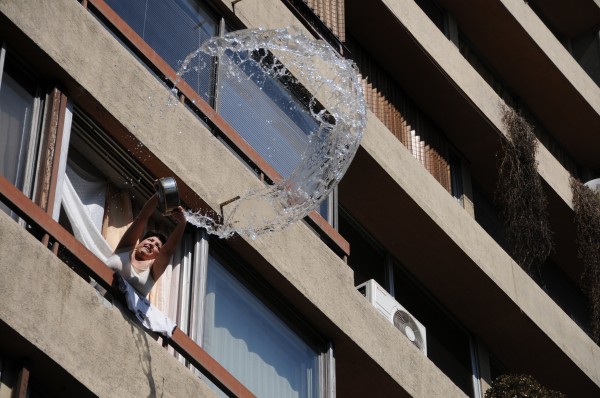 Amid chants of "agua, agua" the neighbors on Lord Cochrane street came to the windows with pots full, with which they doused the broiling crowd.

And we rocked up to the park, where there was a stage set up, and a concert in progress. 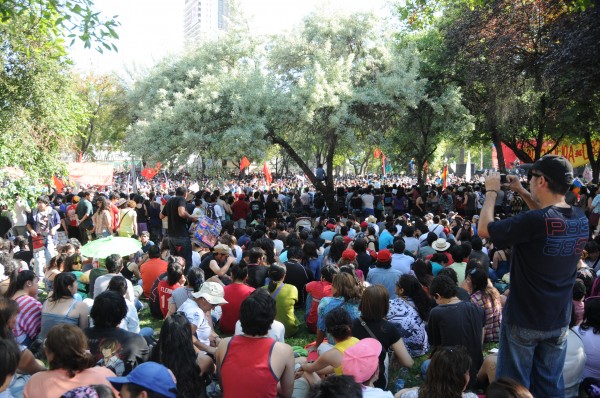 Thousands of people convened in Diego de Almagro park for a free concert after the family march on Sunday, November 6th.

And thankfully, everyone behaved stupendously, though there may have been a few tantrumming toddlers in the mix. The police were nearly absent, and no tear gas was deployed, but walking back on Nathaniel Cox, we saw a couple of armored buses and water cannons waiting just in case.

This week brings more conversations between the student groups and the government to see if an accord can be reached.