LET’S JUST SAY IT — THE INTERNET has way too many ads on it. And while it’s nice to know that your favorite websites are being supported by some sort of income, at some point, the ads can get both overwhelming and annoying. So many people have turned to AdBlocker and other services that prevent ads from popping up when they visit ad-heavy pages. When it’s first activated, it’s like a breath of fresh air: suddenly, the constant barrage of corporate messages stops, and all you’re left with is the content you’d clicked on in the first place.

In an awesome move, AdBlock teamed up with Amnesty International, Edward Snowden, Ai Weiwei, and Pussy Riot to raise awareness for today’s World Day Against Cyber Censorship. Throughout the day, in the place of ads, AdBlock will show messages from the activists about the importance of freedom of speech and cyber security. Considering all three people have been considered political prisoners at one time or another, it’s a particularly powerful message that’s suddenly replacing corporate ads. 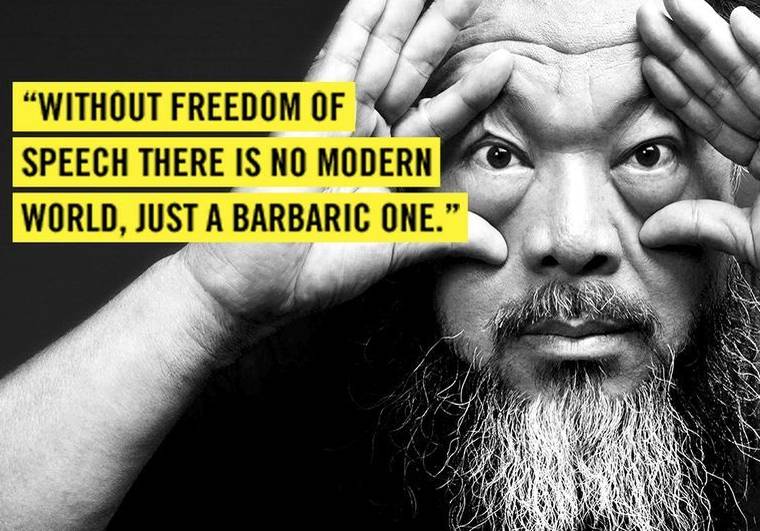 Some, like the website Mic, have called the choice of partnership with AdBlock “ironic,” as many media sites (including this one) are supported by ads, so ad-blocking software is seen by many as a way of depriving a free media of a revenue stream that is desperately needed in the internet age. It’s a fair critique, but there are plenty of people who feel that ads are an intrusive and insidious force in their lives. In the words of the street artist Banksy:

“People are taking the piss out of you everyday. They butt into your life, take a cheap shot at you and then disappear. They leer at you from tall buildings and make you feel small. They make flippant comments from buses that imply you’re not sexy enough and that all the fun is happening somewhere else. They are on TV making your girlfriend feel inadequate. They have access to the most sophisticated technology the world has ever seen and they bully you with it… Fuck that.”

Using ad-blocker software from this point of view could arguably be a way of reclaiming some level of control over what you consume on a daily basis. The debate, of course, makes the campaign even cooler: Amnesty is subversively using a controversial tool that fights a controversial aspect of our society to illuminate a controversial threat to our human rights. None of the three political activists are universally loved people: Snowden is deeply mistrusted in much of America, Pussy Riot is considered dangerous in Russia, and Ai Weiwei is on the Chinese government’s shit list.

All of it serves as a reminder: there is no totally safe zone for free speech. There is no completely safe internet. Media is everywhere, as are the threats to its freedom. Kudos, Amnesty.