View all travel news
Top Destinations
Top CitiesView All Destinations
Trending Regions
Trending Cities
Load More
Emergildo Criollo Quenama, a leader of the indigenous Cofan of Ecuador’s Amazon, writes an open letter to Matador readers, to Americans, and the world in which he shares his experiences living with the direct effects of Chevron’s environmental and human rights abuses. 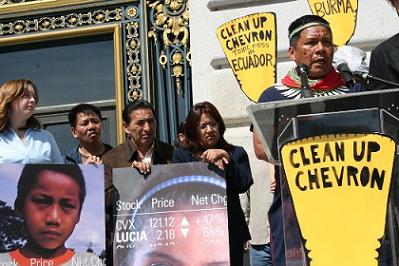 I send a cordial greeting to the citizens of the United States in my native language.

My name is Emergildo Criollo, and I am a representative of Cofan village. Today, I am in San Francisco [California] to participate in the annual meeting of Chevron, where I will let the public know the truth about what has happened in my territory since Texaco initiated its operations in the Ecuadorean Amazon, as well as the history-making lawsuit that we are leading in pursuit of justice after 15 years.

The village of Cofan is located along the banks of the Aguarico River. When I was a boy, we drank clean water and hunted animals in the forest. We fished in the river, which was uncontaminated. Before, we lived free of pollution. We had enough food for our families, and enough natural medicine from the forest. With these medicines, we cured illnesses as we’d always done, according to our traditions. But with the arrival of Texaco in 1964, we could no longer use these medicines because new illnesses began to appear as a result of contamination.

It was in 1969 when I saw an oil spill for the first time, which soon flowed into the Aguarico River. Seeing this, we–the members of the Cofan–could no longer live there because there was no place to source clean water. So we moved further into the forest, establishing what is known today as the community of Cofan Dureno.

But the company pushed farther and farther into the forest, drilling more oil wells. We even had a well, Dureno 1, which was inside our own community. That well affected our people tremendously. There were spills and massive water accumulations. The flames of refinery towers were visible day and night. Animals abandoned the forest and fish disappeared from the river.

Even now, the people from each of these groups continue dying from cancer. It’s for this reason that I write this letter- so you know how Texaco (now Chevron) affects people with its petroleum operations.

The company entered the Amazon without anyone’s permission, destroying the forest and leaving contamination and unknown illnesses in their wake. Today, the company is hiding the truth, saying that oil spills haven’t caused contamination and that they’re not cancer-causing agents. But I know that’s not true because this illness was never in our community before. And I know that my two sons and my aunt would still be alive today.

I invite all of you to visit the Amazon…[S]ee for yourself….

Chevron must take responsibility for cleaning up the open pools and sediments in the ground water supply so that my children can drink clean water and breathe clean air. Chevron took natural resources from the Ecuadorean rain forest, but those of us who live here have only received contamination, sickness, and death.

Everything the company says is totally false. I know because I’ve seen and experienced the effects of their actions first-hand. Texaco, now Chevron, wants to maintain a clean image. But for me, the image of this company is stained with oil. 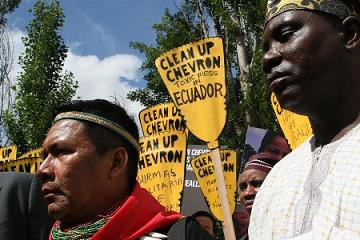 I invite all of you to visit the Amazon where Texaco operated. You can see for yourself. You can see firsthand the contamination. You can say so to Chevron and demand that they accept responsibility.

Today, I’ll be entering Chevron’s headquarters to attend the annual meeting of the company’s shareholders. I’m going to talk face-to-face with the company. I’m going to defend my village and demand justice.

I ask the citizens of the United States to join with the 30,000 residents of the Ecuadorean Amazon in solidarity.

We have been fighting for more than 15 years for the company to clean up the damage it’s done to the environment.

And we’ll keep fighting until the end.

Translated from the Spanish by Julie Schwietert Collazo. To read the original version of this letter in Spanish, click here.

To learn more about what’s going on with big oil this week, check out this article. And to learn how Chevron’s putting responsibility on consumers (and not the company), read about the company’s most recent greenwashing ad campaign. Finally–and most importantly–to learn how YOU can take action, please visit ChevronToxico.

Tagged
Activism Narrative Ecuador United States
What did you think of this story?
Meh
Good
Awesome