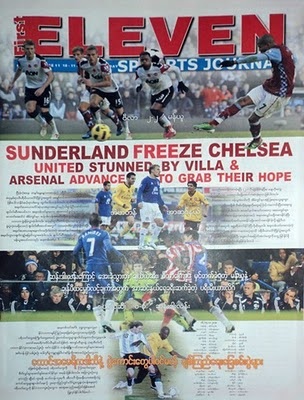 A message celebrating Aung San Suu Kyi’s release is hidden on the front page of a Burmese newspaper. The lighter shade of red font reads “Su Free, Unite & Advance to Grab the Hope.”

The Burmese pro-democracy leader Aung San Suu Kyi is free, but Burma is not. The ruling generals, flush with money from Chinese investment, do not tolerate political dissent and are preparing for war against minority ethnic groups in the wake of a sham election. Aung San Suu Kyi, who won a Nobel Peace Prize in 1991 while under house arrest, has used her recent freedom to speak about the need for national unity and reconciliation.

Despite heavy media censorship, one courageous editor found a way to smuggle the news about Aung San Suu Kyi’s release onto the front page. The message, hidden in a headline about soccer, seems to call for a popular uprising in this brief moment of political opportunity. “Su Free,” reads the text. “Unite & Advance to Grab the Hope.”

Political speech is extraordinarily dangerous in Burma. Aung San Suu Kyi is fearless, but if the government perceives her as a threat, there could be dire consequences.

The glimmer of hope is still alive in Burma, but it requires tremendous courage to sustain. Even when it surfaces, you have to squint hard to see it.

Check out this photo essay, The Spirit of Burma, to get some visual images of a country few of us have visited.

Tagged
News Myanmar
What did you think of this story?
Meh
Good
Awesome

Daily life around monasteries in Burma

What it’s like to drink anti-aging beer in Myanmar