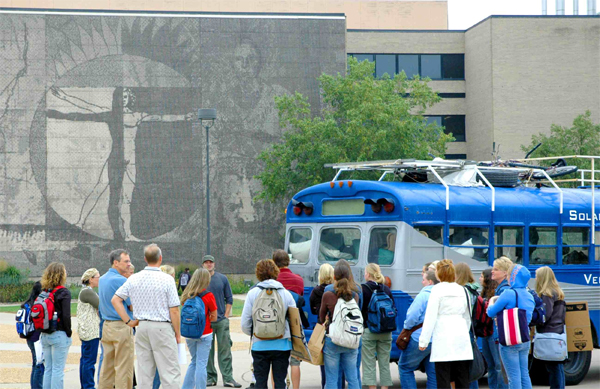 Two friends buy a school bus converted to run on vegetable oil, drive it to Burning Man on waste grease, and realize a new dream: a nationwide educational tour.

We park our 36-foot school bus on top of a giant sundial in front of the student resource center at the University of Wisconsin Steven’s Point. Da Vinci’s Vitruvian man sits high upon a wall behind us. It is early morning, and I watch a handful of students stroll to class through the dew-covered windshield.

A girl asks me about the bus and our message. She informs me that Da Vinci was the first to note that the geometric patterns of a leaf match the branches of the tree it came from, and I admire a large oak next to us while imagining these patterns.

I can already tell this campus will bring a positive experience.

She directs me to my morning cup of coffee and I make my way back toward the bus, passing several smiling faces along the way. “You guys are awesome,” someone says while admiring our solar panels. “This bus is sweet, it smells like egg rolls!” a visitor says coming up the stairs. “I’m jealous of your adventures,” another says as she’s leaving.

BioTour began in August 2006 when two friends decided to take a road trip across the country, but didn’t want to go broke doing it. They bought a 989 Bluebird school bus converted to run on vegetable oil – read: free fuel – and Ethan Burke and Alan Palm drove it from the East Coast to Burning Man on waste restaurant grease.

As they stopped in cafes, at gas stations and rest stops, and, of course, behind Chinese restaurants, the positive reaction and support from truck drivers, park rangers, gas station attendants, policemen and passersby inspired the recent college graduates to turn their BioTour into an sustainability education non-profit.

Beginning its fourth cross-country tour this fall with two buses and a chase car, the BioTour stops in communities, K-12s, colleges and universities proving to people in this petroleum-guzzling country that there are viable fuel and energy alternatives. 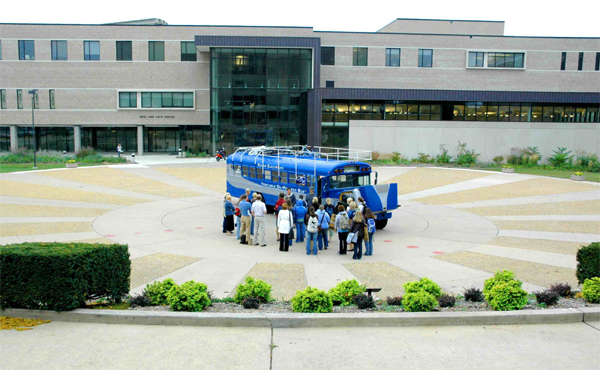 The crew shows onlookers – sometimes dozens at a time – a vehicle that once ran purely on diesel that is now powered by a waste product that smells like fried food.

After peeking crowd interest, BioTour invites them in for discussion on current issues. These range from high gas prices to mountaintop removal coal mining to rainforest depletion to confined feeding operations.

One example raised in several of the final visits of the Spring 2008 tour, created perplexing debate: In the face of pervading food shortages around the world, are biofuels good or bad?

There is no short answer to a question like this, but starting a discussion is the first step to spreading knowledge and finding solutions.

There is no short answer to a question like this, but starting a discussion is the first step to spreading knowledge and finding solutions.

A BioTour visit includes a formal presentation outlining the world’s dependence on fossil fuels, then demonstrates a “fill-up” by pumping school cafeteria grease into the gas tank.

Local bands can power up with the solar panels on the bus’s roof, and oftentimes, drum circles will start in the center of campus.

The idea is to create excitement around a growing Sustainability movement and encourage participation in the democratic system. While crossing 43 states, we’ve met passionate and concerned individuals who make changes by actively involving themselves, and who most certainly will be this country’s future leaders.

While Alan is doing an interview for the local news and Ethan and Fernando explain the vegetable oil-conversion kit in the engine, I take pictures, listen and observe. At my periphery are books and articles describing our current energy crisis. Jack Johnson sings, “the cars were all spitting diesel fuels” on the stereo.

Two students outside argue the probability that we’ve reached peak oil. This frame of mind harasses me. Do I run and return to a less mobile, more established and blissfully ignorant lifestyle that smells less of French fries and more of chemically laden room deodorizers? 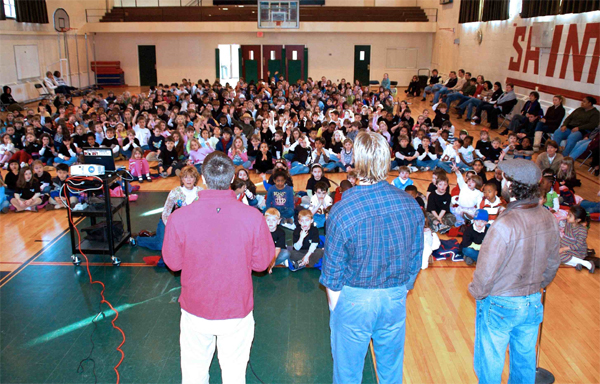 No, instead I feel exhilarated. Maybe it’s the lack of sleep from driving through the night, maybe it’s the coffee kicking in. But more so I believe it’s the people – young people – who are interested in making a difference.

There is no better sensation than knowing people do care, that they are listening, and that our message will captivate them enough to be passed along.

For more on BioTour, or if you’d like to jump on a bus, find us at www.biotour.org.

For a step by step guide on converting your own vehicle to veggie oil, check out How to Stop Paying for Gas and Run o Free Veggie Oil in 8 Easy Steps.