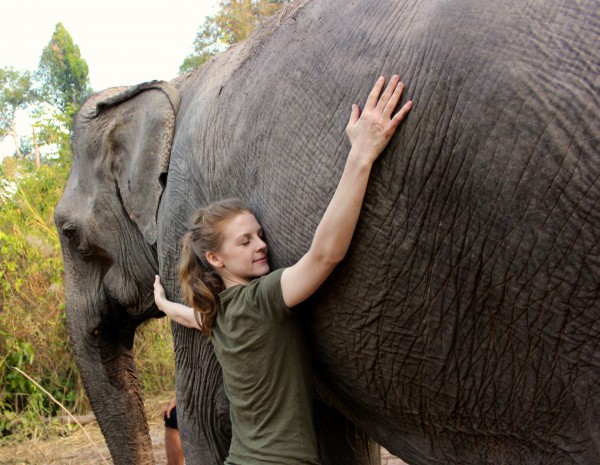 My knowledge of elephant rehabilitation is, admittedly, quite limited. While I care very much about endangered species and preserving their environments, my involvement hasn’t gone beyond donating to the World Wildlife Federation, or posting a “Save the Whales!” link on Facebook.

So in talking to actress and animal supporter Ashley Bell — who is currently starring alongside Rebecca Hall in Broadway’s Machinal, and can be seen in Love & Air Sex, available now on VOD and in select theaters — I wasn’t sure what to expect regarding her latest endeavor, a documentary film entitled Love and Bananas. Lots of celebrities have “causes” that they are the “face” for, but don’t go beyond that. Would Ashley describe this charity with rehearsed lines, just like a scene from a script?

To my relief, Love and Bananas is definitely a cause worth fighting for. It’s completely a labor of love, brought about by Ashley’s passion and desire to make the world for elephants, and other creatures, a better place to live. 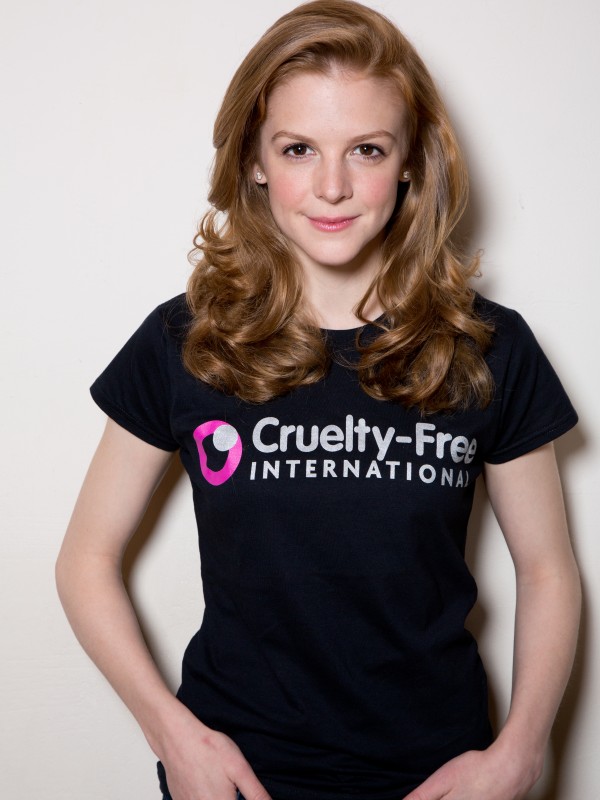 The title of her documentary, which focuses on the rescue and rehabilitation of two Asian elephants in Cambodia, was inspired by the work of Lek Chailert, who runs an elephant sanctuary in Thailand.

“While working together, Lek would often have bananas piled in front of her,” Ashley explained. “I watched her jamming medicine into them, to help the elephants. In working with these animals, you have to be careful at first, because their trust of humans has been broken through abuse. But by day three, they warm up to you, and approach you.

“It’s so true what they say, that ‘an elephant never forgets.’ It was then that I knew the world could help animals through affection, and patience — through a little ‘love and bananas.’”

The moment Ashley began to speak, I could hear the genuine passion she had for animals in her voice. An animal rights supporter and vegetarian since she was young, Ashley described how, through research and the education her parents provided, she developed her love for all things living.

“When my classmates went to the zoo, or the circus on field trips,” she explained, “I was the one outside of the school, protesting the trip!”

She’s since become an Ambassador for Cruelty-Free International. Her involvement with the elephants of Cambodia didn’t arise until fairly recently, however. Ten years ago, Ashley’s friend David Casselman founded the Cambodia Wildlife Sanctuary to protect elephants and other endangered animals of the region and preserve their natural habitat.

“I never go on vacation,” Ashley described. She has starred in numerous feature films, including a nominated performance in The Exorcism of Emily Rose. “But after reading David’s email, I said, ‘I’ve got to go!’ I booked tickets for Cambodia that evening, and left as soon as I could.”

Lek kept saying, ‘Run!’ I start to run, and turned around to see the elephants charging into jungle.

The initial experience for Ashley was filled with mixed emotions. She felt inspired and overjoyed at watching the rescued elephants take their first steps of freedom, playing an integral part in their recovery and rehabilitation, and experiencing Cambodian culture firsthand. But she wasn’t prepared for the harsh realities that came with such a rewarding opportunity.

“You think you know so much about a situation,” she explained. “But you really have no idea. While in Cambodia, I learned that 75% of rainforest is gone from slash-and-burn logging. I learned that there are no more wild Asian elephants, and that they are all living in captivity.

“To make the elephants captive, you have to break them — they are beaten straight with a bull hook. The love and attachment of their mothers is replaced with abuse.”

Ashley’s ‘Wow!’ moment came when she recognized these crippling juxtapositions. “I was taken by the majestic, raw, exuberant feel of untouched jungle, in stark contrast to the smoldering trees.”

What impressed me the most about Ashley’s story was how she was able to connect with equally passionate and inspiring individuals during her time in Cambodia. Lek Chailert is one of the biggest advocates for elephant rehabilitation in the world, and plays an integral role in Love and Bananas. Chailert is one of Ashley’s personal heroes, and working alongside her proved to be life changing.

“Every act she does is so selfless,” Ashley describes. “Lek spent the night rescuing these elephants, traveled across a war zone, took them on a truck, then on a ferry, medicating them the entire time with medicine stuffed into bananas to feed them.

“One day, she asked me, ‘Do you want to go on a walk with the elephants?’ Of course I did! Lek then pointed into jungle, and said, ‘Run!’ I was confused, but Lek kept saying, ‘Run!’ I start to run, and turned around to see the elephants charging into jungle. These elephants were carving a path with Lek for first time.”

Her story sent shivers down my spine, envisioning the joy these elephants must have felt in tearing through the jungle without fear. I knew this experience must have come with obstacles, however. What types of risks were involved in such an endeavor? What day-to-day conditions are we taking about?

She replied with nervous laughter. “We learned that squatters were coming into the sanctuary land,” she begins. “They were cutting down the trees, and poaching animals. David wanted to see what was being taken down, so we boarded a helicopter and flew over the land. It was such a shock, to see the deforestation for first time — the land was completely charred.

“Even if it’s only one elephant at first, if Love and Bananas can educate people, and bring more awareness to this issue, I’ll have done my part.”

“We looked down and saw loggers cutting down trees using oxen. Then David starts yelling, ‘Cut hard! Cut hard!’ The helicopter circled around them, and the loggers scattered. We managed to chase them away. We wanted to send them a message, let them know what they were doing wasn’t right, that ‘somebody’s watching.’”

That wasn’t the end of it, however. Ashley went on to say that her crew was called to land on a military base, where Cambodian military men wearing flip-flops, camouflage, and AK-47s, traveling on motorcycles, surrounded them.

“We had to call in certain local people to get us out,” she said. It was a tense moment she experienced during her first days there. She also explained that the crew must use undercover camera work, and aerial footage, in areas where they are denied access.

Ashley’s energy is admirable — she considers her acting career, and her work on Love and Bananas, to be two full-time jobs.

“That’s what’s so exciting about taking on a project like this,” she added. “Being able to stay creative constantly, having a project to work on, brainstorm on, keeping busy, keeps my mind in creative space.”

Multimedia company Change for Balance Productions is producing much of the project, but there is still a lot to be done and acquired. Ashley has set up an Indiegogo campaign to help crowdsource specialized equipment, as well as to help track, shoot, and guide the mission to rescue Cambodian elephants.

“I’m so grateful for the opportunity to meet so many creative people, and to collaborate and create this story,” concluded Ashley.

“Even if it’s only one elephant at first, if Love and Bananas can educate people, and bring more awareness to this issue, I’ll have done my part.”

Special thanks to Ashley Bell for this interview opportunity. You can find out more about Love and Bananas by visiting the “Ele-Fund-Raising” Indiegogo campaign.

Tagged
Interviews
What did you think of this story?
Meh
Good
Awesome