IN THE THIRD MONTH of educational protests by students and supporters against the current government in Chile, I start to wonder how it’s going to end. In the last two protests I’ve started to see signs indicating that the students think President Sebastián Piñera should step down. I don’t know if that’s a real demand, or even a real possibility, but today marked the 36th student protest this year, according to the lefty newspaper The Clinic’s twitter feed.

And it’s not hard to believe. Where I live there are no longer any street signs, and we’ve had to revert to giving directions via landmarks. A few streetlights are still down, though the metro sign has been put back together since it was destroyed in the aftermath of a protest several weeks ago. And the protests keep going.

This makes the 36th march in the capital, according to The Clinic's twitterfeed.

Today’s student protest was authorized by the local goverment, to take place from the Universidad de Santiago’s metro, up the Alameda, down Avenida España, via Blanco Encalada and ending at Beaucheff. The march was convened at 10 AM, see the map below for the route, and for reference. 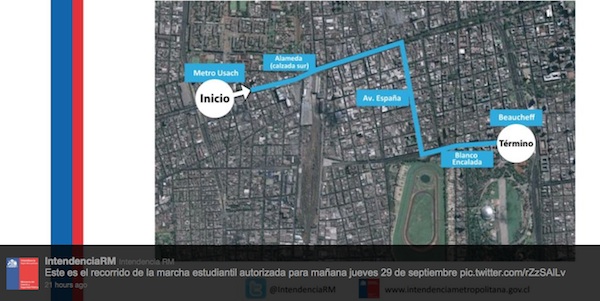 The protest route from the Alameda, to España, up Blanco Encalada ending at Beaucheff, courtesy of the local government.

Three shrill whistles is how the protesters at the back of the crowd warn those at the front that the police are coming. It might be a type of guanaco, an armored bus with a roof-mounted water cannon on top or a zorillo (literally: skunk), which lobs tear gas canisters out into the street. But whatever it is, it seldom ends well. Tear gas and water against rocks and paint bombs, which are glass bottles filled with paint that, when broken stain the police vehicles and the streets.

It was only 11:51 on Beaucheff when I first heard the shrill whistles, and less than four minutes later, the streets were mostly clear of thousands of students, who ran north back towards the Alameda as the police vehicles spewed tear gas, and students teared and spat and ran away from the water cannons’ reach. Within a matter of seconds, the streets were being torn up, an the sound of rocks, asphalt and paint bombs hitting the vehicles could be heard above the footfalls and generalized panic. It is commonly held that these violent acts, perpetrated by those referred to as “encapuchados” (hooded, or masked ones) is the work of a malicious few, hangers on to the student protests, and/or that they are partially infiltrated by police to justify the violent interchange.

The crux of the issue throughout the 36 marches remains the same, students want to see the deprivatization of universities, for there to be free access to education for all. Slogans blaming Piñera for not having made any changes are commonplace, but signs directly blaming him for what is seen as a spate of bad luck on Chile’s part are somewhat new. Examples of the bad luck during his term are the mining tragedy in Copiapó, the 8.8 earthquake, a recent plane crash near the archipielago of Juan Fernandez. 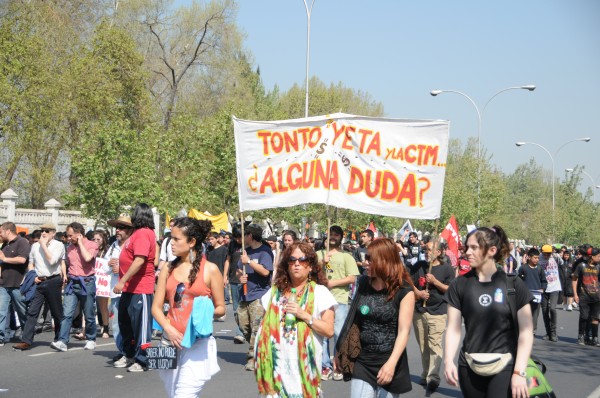 Stupid, accursed and (one of Chile's strongest swearwords), Any questions?

And this clever one, which reads, “Piñera, quédate con tus billetes, entrega La Moneda” which literally means, Piñera, keep your bills, but give back “the coin” where “the coin” is the name of the Presidential Palace. 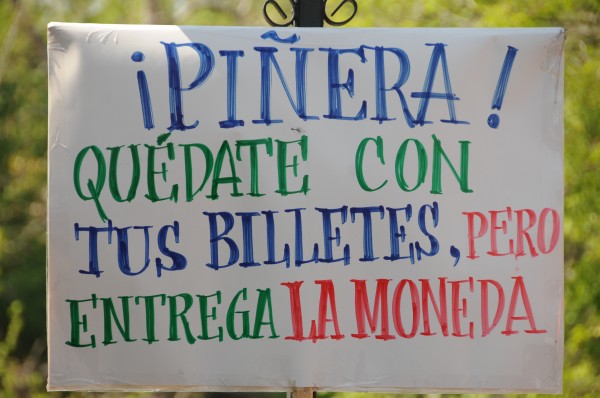 Piñera, keep your money, give back the Moneda (Presidential Palace).

And then came the zorillos. 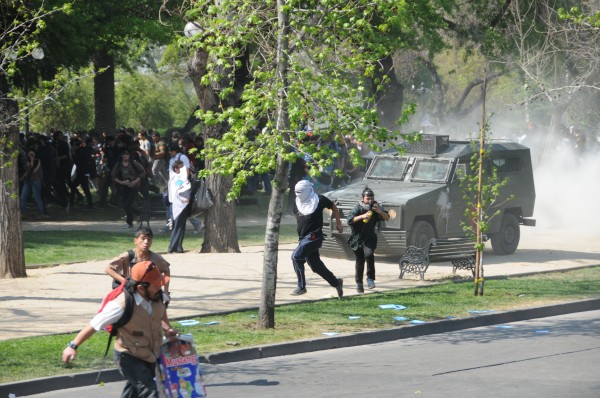 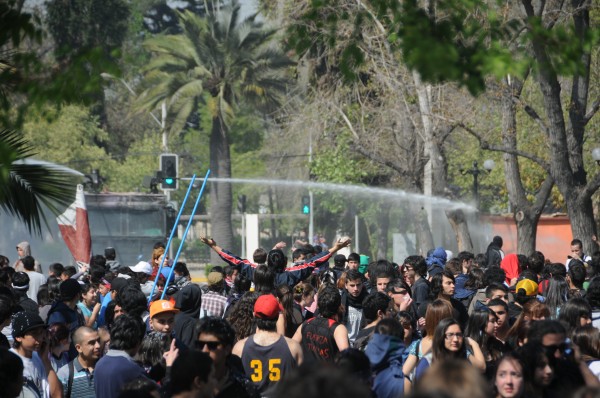 And this kid in his school shirt and tie (despite the stoppage, the kids often wear uniforms to show they’re in high school) put his hand up over his tearing eyes. 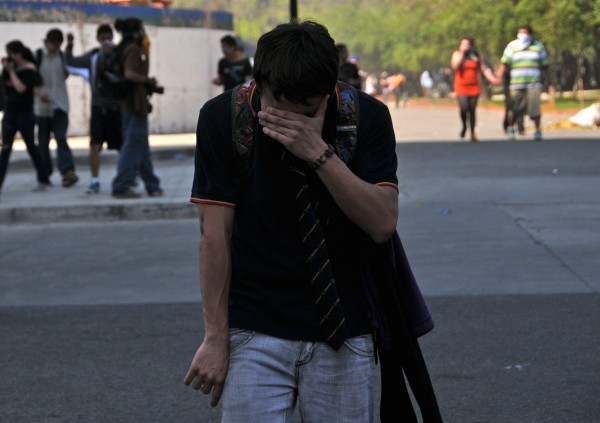 Later, I found a group of people blocking traffic on the Alameda, and this sign caught my eye. Its text, translated reads, “The only fight you lose is the one you abandon.” 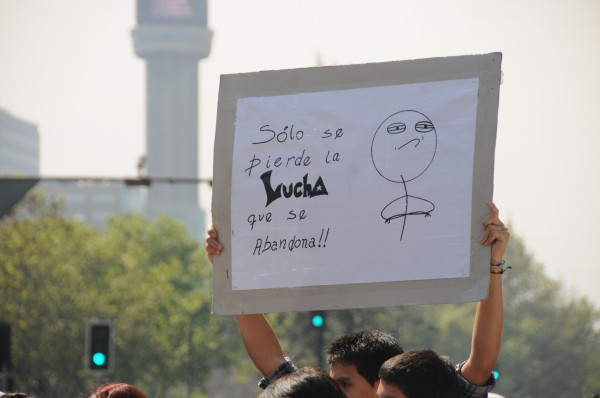 And in downtown Santiago, the fight continues.