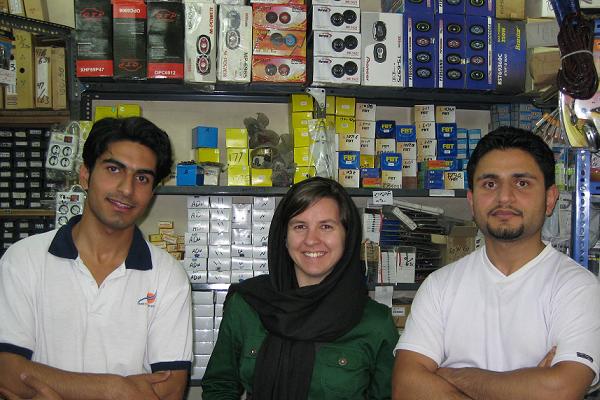 There are a lot of words Westerners associate with Iran, but citizen diplomacy is probably not among them. Your typical news report on anything dealing with Iran might mention nuclear ambitions, sanctions, or Ahmadinejad’s latest display of rhetoric.

But these phrases have little connection to the experiences of Rebecca Griffin, who recently returned from Iran, where she carried messages of peace from American citizens. Griffin is political director of Peace Action West, and I sat down with her to hear about her experiences first hand. 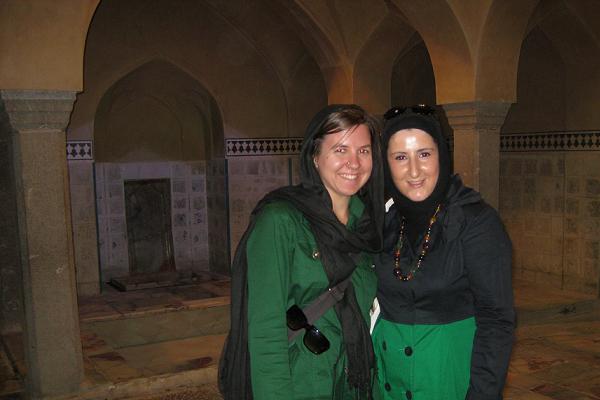 Griffin with an Iranian woman who asked, “Weren’t you scared to come here because of the media?”

In a climate where 35% of Americans named Iran as the number one threat to America, citizen diplomacy might be far from many people’s minds. Rebecca Griffin thinks that just means pundits and fear-mongering media are doing their job well. She believes that is even more reason to engage in diplomacy.

“Politicians and pundits in both the United States and Iran build support for an approach to the world based on force and aggression by dehumanizing the ‘enemy’ and exploiting people’s worst fears. But regular people like you and me can take their power away by putting a human face on the US and Iran and showing that ordinary people in both countries support each other and want to build a strong, respectful and peaceful relationship. By demonstrating that Americans and Iranians are more alike than we are different. Share your personal hopes for peace with Iran in a recorded message, and I will make sure Iranians see them. It is much harder to advocate for sanctions when you know a child who will go hungry, or bombings when you know families who could be killed. Thank you for sharing your positive hopes and vision for friendship with Iran.”

That appeal went viral online and Americans from all parts of the country sent in written statements and recorded audio and video of themselves addressing Iranians with messages of peace and good will.

”The responses were very positive and encouraging on all sides,” Griffin said.

Griffin gave CDs of the various messages to people and groups she met in Iran. She found Iranians she met to be very welcoming. For some, she was the first American they had ever met in person. 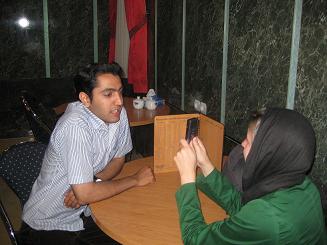 Griffin said she was motivated because “there is a new window of opportunity” and a new mood in the country. Add to that new media technologies that make it easier to communicate globally.

Her goals were to show Iranians that the average American wants peace, to show both Americans and Iranians another side of each other, and to mobilize citizens to pressure politicians to back away from confrontation and engage in diplomacy.

While in Iran, Rebecca met with American Studies students at Tehran University and with members of a group called Miles for Peace, a group of Iranian citizens who bicycled through Europe carrying their own brand of citizen diplomacy. 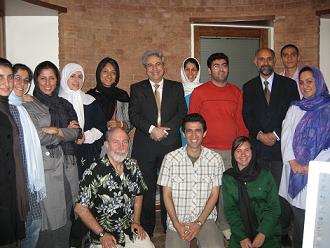 Griffin with members of Miles for Peace

They traveled for 70 days through 18 cities and met with European mayors and citizens. Griffin noted that both she and members of Miles For Peace found it uplifting that ordinary citizens of both nations were educating and advocating for peace and mutual respect.

I asked her about President Obama, who just returned from his own tour of the region. “Obama’s speech is significant,” Griffin says, “especially when [compared] with any previous administration.”

Obama highlighted diplomacy without preconditions and a new path forward, as well as Iran’s right to peaceful nuclear energy, while warning about a nuclear arms race in the region.

Griffin said that it is a step in the right direction with regard to healing relationships with Muslim countries. “But,” she continues, “the people of the region want to see action, not only talk. They are waiting to see.”

There is a lot of mistrust between the two nations. Iranians remember our activities in the region, as Griffin was continuously reminded. For example, while many Americans are probably unaware of the CIA’s (and the British) role in the 1953 coup that overthrew elected Prime Minister Mosaddeq, this information is part of standard history lessons for Iranians. 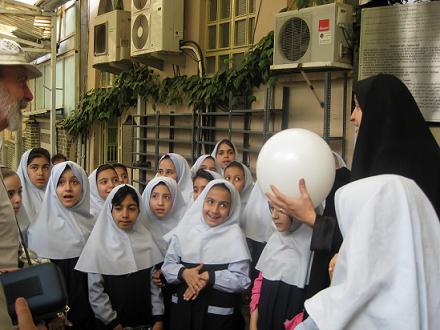 Iranians also remember the United States’ role in the Iran-Iraq war, a bloody 8-year conflict that injured over a million people and is not far from the minds of even young people, who were just children at the time. The United States played each country off one another, but heavily aided Iraq’s Saddam Hussein, giving him the green light to attack over Iran’s border. The United States not only gave billions of dollars in aid, but also intelligence, weapons, chemicals, technology, agricultural credits, and special forces training.

“All of this still feels very present to them,” Griffin told me.

She also told me a story of a taxi-cab driver who told her group he wants peaceful relations with the United States, and even wants different political leadership. But he added that he would pick up a gun to defend his country, who he called “mother,” if threatened or attacked by the United States.

Griffin said this belies the claim that if we just pressure Iran enough through sanctions, its citizens will turn against its government. The United States has often used the strategy of sanctions as punishment against countries, from Cuba to Iraq, in an attempt to make conditions worse for both the government and the people until—so the theory goes—the people will rise up to force a change of regime or change of behavior on the part of its political leaders.

“Regular people like you and me can… put a human face on the US and Iran and show that ordinary people in both countries support each other and want to build a strong, respectful and peaceful relationship.”

The path to trust and a healthier relationship between the United States and Iran is an uphill one. There are many obstacles to normalizing relations with Iran. Alongside Ahmadinejad’s and Supreme Leader Khameini’s provocative statements and the fact that U.S. bases, troops, and naval warships are surrounding Iran, Congress is sending the wrong message, sometimes at odds with Obama’s.

At the same time, Obama is making diplomatic gestures and trying to change the tone, Congress is talking about harsher sanctions and drafting bills to punish companies that sell to Iran, actions Griffin sees as counter-productive. Peace Action West and its members are pressuring their representatives to support diplomacy and take advantage of an opportunity to move away from confrontation.

When I asked her how she responds to those who would say she should leave diplomacy to the diplomats, Griffin says, “Of course there has to be high-level diplomacy. But speaking as citizens is a lot less loaded of an interaction. When you speak person-to-person,” she notes, “you realize how similar you are.”

Whatever Obama’s administration does with regard to Iran, Griffin stressed the need to get past the one-sided narrow version of each other that each country has, mostly gained through the mainstream media and the government. Especially in the age of blogging, alternative media, and global travel, Griffin counsels citizens of both nations to “learn more about each other and to facilitate communication.”

If only the pundits and politicians would get out of the way.

To find out more about Rebecca Griffin’s trip and how to get involved, visit Peace Action West’s Citizen Diplomacy.

To learn more about current Iranian politics, read about the ways in which women in the region are influencing political and social space.