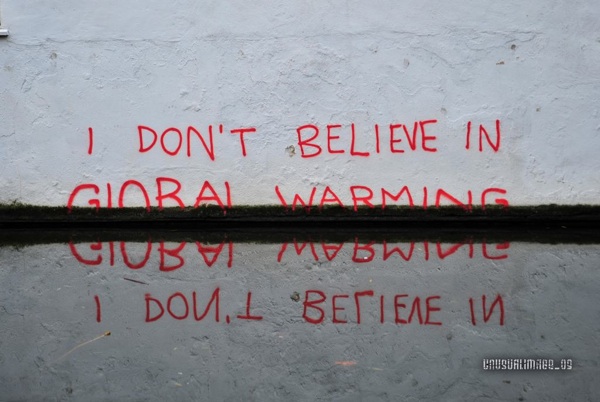 Don’t believe in global warming? You don’t have to.

I recently received an email forward with a video clip featuring a prominent meteorologist refuting man-made global warming. John Coleman introduces himself as “founder of the Weather Channel, original weatherman on Good Morning America and a TV meteorologist for 55 years.” He makes himself sound pretty qualified.

Coleman claims that he loves the earth and wants to protect it, yet spends the next 8 minutes refuting the idea of man-made global warming.

In his video, Coleman shows impressive charts and graphs that point to the planet’s natural cycles of cooling and warming. He says these have existed throughout all of the earth’s history and are independent of human activity. Coleman’s assertions seem believable until you consider that some of his logic is clearly faulty.

Coleman says carbon dioxide is a naturally occurring gas that is an essential part of our lives. We breathe it out. Plants need it. It’s a part of our atmosphere.

But he never says it’s possible to have too much, to upset the balance. Kudzu, for example, is a naturally occurring plant that, on its own merits, is not bad. But outside of its natural habitat, where it’s allowed to grow unimpeded, it becomes a problem.

Coleman also uses the quiet 2009 hurricane season as evidence that there is no such thing as global warming. He’s apparently forgotten his own argument that the earth goes through naturally occurring cycles; this past season was quiet because of an El Niño whose wind sheer prevented strong storms from developing.

Coleman says the hypothesis of human-caused global warming has been disproved and that we should stop talking about it.

Let’s talk about all the other things that are happening, irrefutably, at the hands of the human race.

“I think we can go right ahead with our very good lifestyle, our modern society,” Coleman says, as pictures of cars and electronics appear on the screen next to him. “We can even power Las Vegas and continue with life…. Our earth is going to be just fine with the burning of fossil fuels as long as they last. We can have a modern, fossil fuel-powered civilization and not worry about the climate of planet earth.”

Actually, he’s wrong. Climate change may or may not be occurring, and it may or may not be our fault. Either way, we face other serious, man-made environmental problems, some of which are related to rising levels of carbon dioxide caused by human activity.

A recent study showed the world’s oceans, which absorb carbon dioxide, are becoming more acidic as a result of increased emissions. And this makes them less effective at continuing to absorb CO2.

This means more emissions are staying in the atmosphere and contributing to air pollution. The World Health Organization estimates that air pollution contributes to 2.4 million deaths each year, as well as asthma attacks and other respiratory problems. Not to mention the decreased visibility that comes with smog that lowers our quality of life.

I guess John Coleman chooses to ignore the fact that powering Las Vegas contributes to a visibility-reducing haze over the Grand Canyon and water shortages.

I also take issue with Coleman’s nonchalance towards the use of fossil fuels. He may not think they contribute to global warming, but our current usage means we’re dealing with the geopolitical implications of energy dependence. Even if we extract more oil from domestic sources, doing so can physically damage habitats through drilling or through accidental spills. Plus, the world is catching on to the fact that cities with viable alternatives to car driving are more livable.

Our “very good lifestyle” has wreaked havoc on ecosystems around the world. We’re faced with issues such as mountaintop removal, trash accumulation in the North Pacific Gyre, dead zones created in our oceans from concentrations of farming chemicals, species struggling to survive because of habitat loss from development.

And Coleman thinks we should just continue on the way we are? Is he out of his mind?

The truth is that there’s a lot at stake with the issue of global warming. But don’t let the skeptics fool you into thinking there’s nothing else to worry about. Global warming or not, we all still have a responsibility to protect the planet.

Climate change scientists warn that the world’s glaciers are disappearing. Read Where to Find Glaciers in the Northern Hemisphere and plan to see these giants before they disappear.