IN RAIN, IN SNOW we keep on protesting.

This was a new chant I heard out at today’s march for education reform in Chile. Many people thought that this permitted protest wouldn’t take place, or would be quietly quashed when we woke up with near and below-freezing temperatures and precipitation. Instead, it has turned into a march known on twitter as #marchadelosparaguas (the march of the umbrellas) for the thousands of multi-hued umbrellas marching down the street, with thousands of students and supporters chanting underneath. It’s the second trending topic for twitter right now in ultra-connected Chile, with people mainly lamenting that they couldn’t be there, and musing how hopefully the bad weather will keep the encapuchados (literally hooded people, referring to protesters who cover their faces to commit acts of vandalism) at bay.

In their place, banners and this fun mock-up of a Santiago public bus took to the streets, the former asking for a plebescite, or turning the vote for whether or not to fund education to the people, and the latter calling out the for-profit educational model. 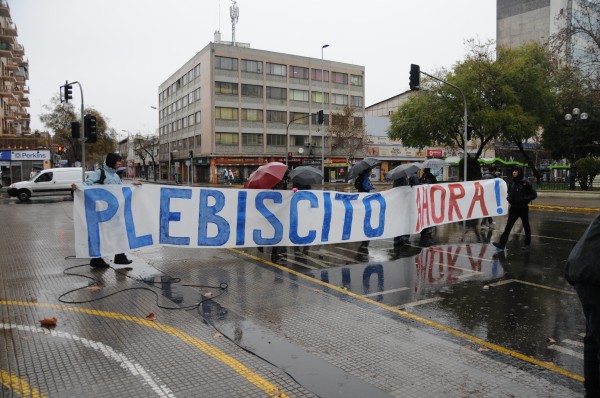 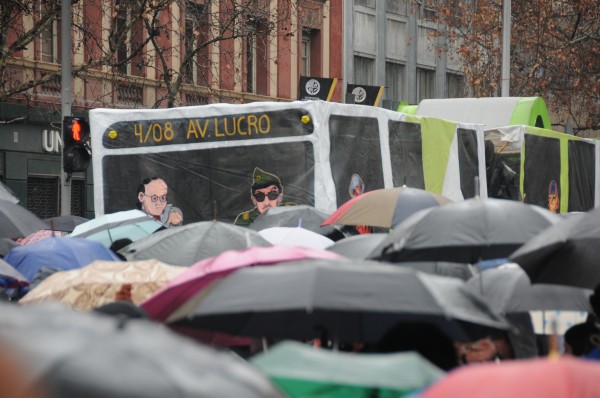 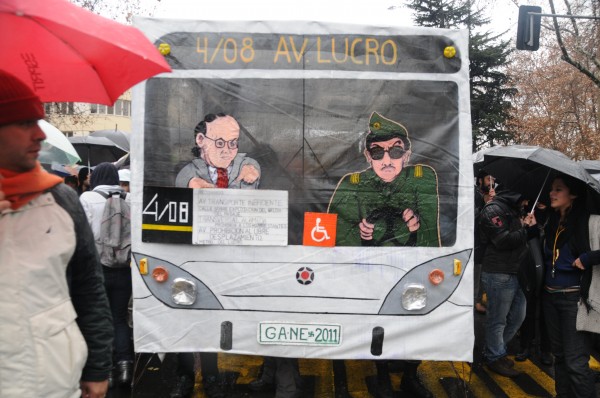 Negotiations between the student groups and the government have not made much progress, and as of August 4th, President Sebastián Piñera had approval ratings of only 26%, which are the lowest seen by any leader of the Chilean government since the end of the dictatorship, according to El Mercurio, a Chilean newspaper (in Spanish).

Today’s march convened about 50,000 people, after about a week’s break since the last march. Many universities and high schools are still “en toma” (in takeover), and this academic year is likely to be a wash for those students, since even attending school until a month past the normal academic year wouldn’t give them enough hours to finish. The CUT (the main labor organization in Chile) has called for a general strike on the 24th and 25th of August to support the students in another “paro general” (general stoppage).