“A 12-year-old girl once told me that when she surfs, she feels like she can do anything,” Dionne Ybara, founder of the Wahine Project, said to me while sitting on the beach in Punta de Mita, Mexico. I was helping Dionne out as an instructor at a couple of the clinics close to where I live.

She tied her shoulder-length, curly black hair into a ponytail, looked out over the ocean, and smiled. We were waiting for the Wahines (Hawaiian word meaning “girl” or “woman”) to show up for the 4pm surf clinic. Gentle waves lapped against the shore. The water was a brilliant blue even though clouds stretched across the sky.

The goal of the Wahine Project is to break down financial and geographical barriers that prevent girls (ages 7-17) from participating in the sport of surfing. By providing them with resources, education, and travel opportunities, the initiative offers them the chance to progress in their surfing. At the same time, they improve their health, self-esteem, leadership skills, and sense of social responsibility.

“The original idea for the Wahine Project was inspired by an organization called Skateistan,” Dionne told me as she picked up a piece of coral. “Oliver Percovich, based out of Afghanistan, started a skateboard program and included girls.” In Afghanistan, and other Muslim countries, hard-line Islam dictates that girls can no longer participate in sports after the age of 17, and in some cases as young as 12. Religion, Dionne realized, was just one of the many barriers that prevent girls from participating in sports. 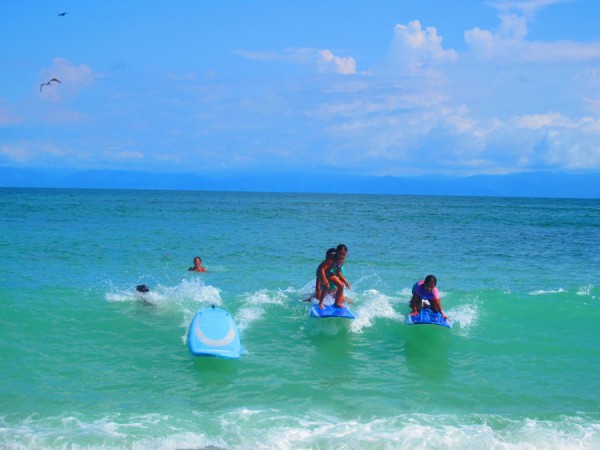 One of the only waves of the day

Every Saturday from 9am-2pm, Dionne hosts a Wahine surf clinic in her small beach community of Pacific Grove, California. The mother of one local Wahine — whom we’ll call Mary — emailed Dionne to tell her about the improvement she saw in her 14-year-old daughter. Mary had been failing in school, getting into fights, talking to older guys, and at one point even ran away. Her mother noticed a change in Mary’s attitude after her first day with the Wahine Project: “Every week she counts down the days until Saturday when she gets to surf with the Wahines.”

During the Wahine Project’s recent South Swell Tour this past summer, Dionne hosted one-day surf clinics in numerous towns along the coast of California, followed by a week of clinics in Mexico. Dionne travels to Mexico about four times a year. Most trips she stays for one to two weeks, but over the winter holidays she spends a whole month in Mexico. 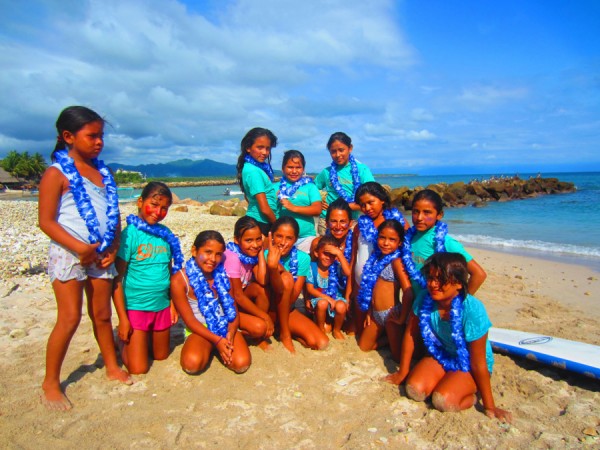 A group of six girls, and one little boy, skipped along the sand towards us. The girls were aged about 7 to 10. We greeted the kids with smiles and hugs. One of the smaller girls, probably about 7 years old, wore red footless tights and a t-shirt for a bathing suit. I made a mental note to ask Dionne to bring some more swimsuits and board shorts down here — standard surfing attire. Most of the girls’ families can’t afford bathing suits. Some of the girls work every day to help support their families.

While Dionne applied Zinka, a thick, colored sunscreen, to the girls’ faces, another group of seven girls showed up. They were a bit older that the first, about 10 to 13 years old. One of the older girls, Juliana, was tall and slender with long, sun-bleached hair. She attended the first ever Wahine clinic two years ago and has participated in every clinic since. Juliana goes to the PEACE alternative school and works afternoons and weekends to help support her family. “One day when we were in Punta de Mita, a couple of years ago, Juliana couldn’t surf with us until she sold all her donuts. So, we bought all of them and she got to just be a kid for that afternoon.”

After some stretching on the beach, we hit the water. The local surf shops had lent us six boards, so the kids had to take turns catching the small waves. Those without a board swam around in the shallow water, demanding it be their turn again: “Otra vez!”

An hour or so later, Dionne announced, “One last wave.” The kids scrambled to get one last ride in. From the looks on their faces, they didn’t want to get out of the water, but Dionne lured them back to the beach with promises of presents — t-shirts and royal blue flower leis.

Over the past two years, the Wahine Project has worked with approximately 500 girls in four different countries — the Philippines, Mexico, USA, and the Gaza Strip. Just this summer alone, they took over 150 girls surfing on the South Swell Tour — from northern California to northern Mexico.

Dionne’s advice for the surfer girls out there: “Keep surfing and don’t stop. Surf with girls who are better than you, learn from one another, support one another, and love one another.”

To learn more about the Wahine Project, check out: www.thewahineproject.org and their Facebook page.

How To Become Mexican in 25 Easy Steps

Surfing and Reflecting in Baja, Mexico