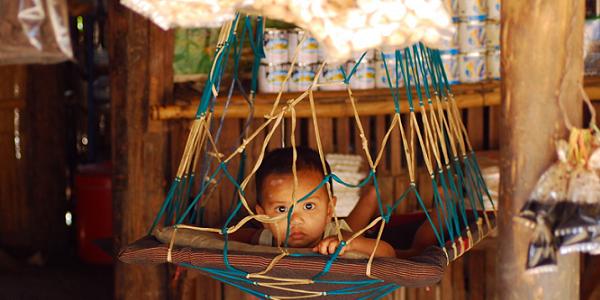 Everyday, hundreds of Burmese refugees flee their native country in a desperate attempt to get away from the violence of the military junta that has been in power for more than 20 years. Canadian journalist Sophie Dube-Chavanel visited some of the refugee camps on the Burma (Myanmar)-Thai border and sent in this report.

It was at the Mae La camp, located about 60 kilometres south of the border town of Mae Sot, Thailand, where I met Kyi Pe Kyaw, his wife, and daughter.

Forty year old Kyi and his family escaped Myanmar five years ago to avoid prison. He became a wanted man after the junta discovered his affiliation with the opposition party, the National League of Democracy.

Kyi explained the events that led up to his decision to flee his country. “In 2004, the SPDC (State Peace and Development Council – the official name of the Burmese military junta) arrested twelve NLD members for distributing copies of the Universal Declaration of Human Rights in the streets of Rangoon. Then, they indicated they would arrest all participants. I’ve already spent eight years of my life in prison. It was out of [the] question to return,” he said.

It took two months for Kyi Pe Kyaw and his family to make the long trip to the border and arrive in Thailand.

Buddhist monks helped the family hide in temples along the way. They were eventually registered as political refugees on January 11, 2005. 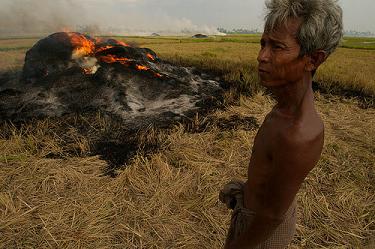 Life as refugees has had its own challenges. Last year, Kyi and his family learned they lost 40 relatives when the Nargis cyclone ravaged the Irrawaddy delta region, in the south of Myanmar. They learned of the tragic news a month after the fact from another refugee who was lucky enough to reach the border.

Cyclone Nargis killed tens of thousands of people and left hundreds of thousands homeless, prompting a new wave of displaced people to join the existing refugees. Few of them make it to the relative safety of the north of Thailand.

Kyi’s family story is far from exceptional. More than 140,000 refugees live in one of the nine camps along the Myanmar-Thailand border.

Mae La is the largest refugee camp, with 40,000 people registered with the United Nations High Commissioner for Refugees (UNHCR). It seems this figure is a gross under-estimation; some non-governmental organizations estimate the camp population exceeds 60,000.

At first glance, the camp stretches for miles. Through the jungle, perched in the limestone rocky hills, thousands of wooden houses are protected with straw roofs. 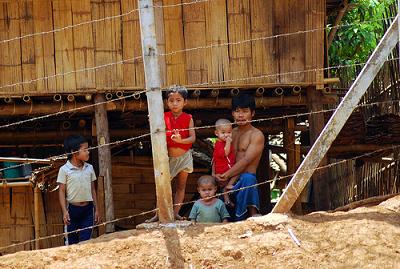 Mae La refugee camp is not guarded (or at least not overtly). Only Thai militia seem assigned to monitor the main entrance. People come and go through dozens of holes in the barbed wire fence that surrounds the camp.

Everywhere, small shops are selling their goods; there is even a DVD rental store. It’s a community similar to any you would find in a small town in Southeast Asia. In fact, some refugees have lived here for more than 20 years.

Nha, a veteran camp resident, comes from the Karen State, the homeland of one of seven ethnic minorities in Myanmar, located just across the Thai border.

He has lived at the camp for 19 years. He lost both of his arms due to a mine explosion when he was only a teenager. “I fled my village because we were warned that the soldiers were on their way. They destroyed my village. I could not go back so I walked. I walked for five days and I came here.” Almost all the refugees have a similar story.

Nha recently received authorization from the U.S. State Department to immigrate to the United States. I ask if he is looking forward to moving.

“What will I do there?” he asks, shaking arms that have been amputated at the elbow. “I will go for my kids so they can go to school and have a better life, but I would prefer to stay here.”

Nha, along with 10,000 other refugees, is part of a resettlement program that was set up three years ago. According to officials, it is the largest resettlement movement ever implemented. Since 2005, 30,000 people have found refuge in one of 10 partner countries, one of which is the United States.

“Resettlement seems to be the best thing that could happen to these refugees, but brings problems of its own.”

Resettlement seems to be the best thing that could happen to these refugees, but brings problems of its own. Simon, a reverend who has worked in the camp since 1988, says, “10,000 refugees have left Mae La in the past three years, but 20,000 more have arrived. Before 2005, the camp housed mostly Karen refugees who were fleeing the Burmese military regime. Now, with the resettlement program, other refugee groups come and use the camp as a gateway to Europe, Canada or the United States.”

Many newcomers are not registered with the UNHCR, says Reverend Simon. “They are not on the camp distribution list for food and accommodation. They have nothing and they must fight for survival. This has made camp a tough environment over the past few years.”

The overcrowding situation is forcing many to live illegally within Thai territory. The Thai-Burma Border Consortium, which is responsible for camp administration, believes at least 200,000 Myanmar refugees live illegally in Mae Sot alone.

The Mae Sot border is located six kilometers from the city. A few hundred meters away, a bridge crosses the river and links the two countries. Dozens of people cross the river sitting on a tube, slipping beneath the gaze of Burmese soldiers. A man pushes them across the river. Known as the swimmer-smuggler, he crosses from one bank to another, helping countless people in their quest for escape.

The price for crossing the bridge is 10 Thai baht – about twenty cents at the time. The Burmese can get a day pass for double the price. I crossed over for around ten Euros and the militia kept my passport to ensure my safe return.

The border is so easy to cross that many do it every morning in a hunt for work. Wages are lower in Myanmar than Thailand. The risk is great but a chance to earn extra money to provide for their families is often too much for people to ignore.

If arrested by police, the ‘workers’ are detained and returned to Myanmar at noon the next day. Some attempt to cross the river again as soon as they are planted back on Burmese soil.

Ko Thawadar is one of those who do not risk crossing the border every day. He has tried to settle in Mae Sot after fleeing Myanmar in September 2007. Ko was involved in a human chain, a makeshift security device for the Buddhist monks marching in the streets of Rangoon.

Ko does not want to live in a refugee camp. He wants to live a normal life and feels that although his life is already limited in many ways, life in camp would leave him with even fewer options.

“It’s not safe for me here. It is filled with Burmese government spies and because I arrived not long ago, they know me. They know my face. They know that I am against the government and I fear for my life,” he says.

To learn more about Burma, check these links submitted by Matador members who have experience working and volunteering in the region.