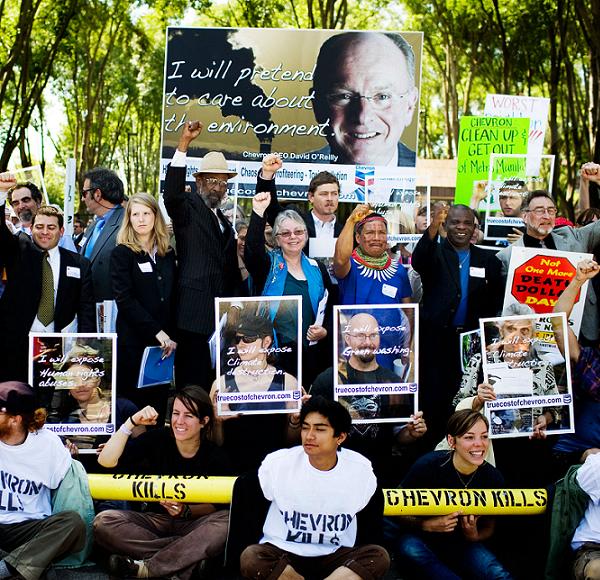 How many activists does it take to shut down the main entrance to the headquarters of the 2nd largest U.S. oil corporation?

Well, six, plus dozens of supporters and organizers of an international campaign called The True Cost of Chevron.

The purpose was to draw attention to Chevron’s environmental and human rights abuses from Richmond, California– the location of one of its largest refineries– to Ecuador, where a judge is set to decide this fall on the long-standing lawsuit that seeks damages of $27 billion for toxic environmental pollution in the Amazon rainforest and its communities.

The setting was Chevron’s annual shareholders’ meeting in affluent San Ramon, California, about 30 miles from its second largest refinery in Richmond. It was too close for me not to miss. 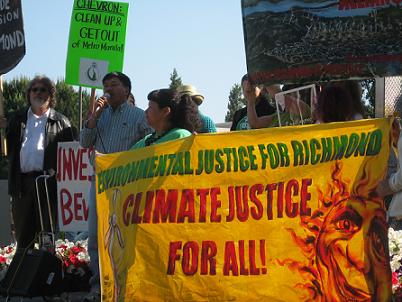 Blocking the entrance was not the goal of the demonstration. Rather, it set the stage for two events that marked the day: First, proxy shareholders came from the many countries around the world where Chevron operates to share the stories and concerns of their respective communities with the Board and Chevron CEO David J. O’Reilly (the 15th highest paid U.S. oil CEO).

Second, the announcement and discussion of “An Alternative Annual Report” entitled “The True Cost of Chevron” that is in striking contrast to Chevron’s own 2008 Annual Shareholder Report, which highlights its remarkable financial success, boasting nearly $24 billion in profits last year. “What Chevron’s annual report does not tell its shareholders is the true cost paid for those financial returns, or the global movement gaining voice and strength against Chevron’s abuses,” reads the alternative report.

It covers everything from Chevron’s successful lobbying of high-level political connections to air pollution, toxic spills, industrial accidents, discriminatory labor practices, human rights abuses, and environmental and health devastation. Its demands to Chevron are clear and simple: clean up your mess, clean up your act, stop aligning yourself with dictatorships and militaries, pay your fair share, and be transparent.

I was among several dozen activists who accompanied the proxy shareholders to the security gate, where they were sent off with good cheer and warm solidarity. Soon after the shareholders went in, six local activists from Unconventional Action if the Bay Area and Rising Tide locked down the main entrance lane by locking their arms in PVC tubes painted yellow with the words “Chevron kills.” 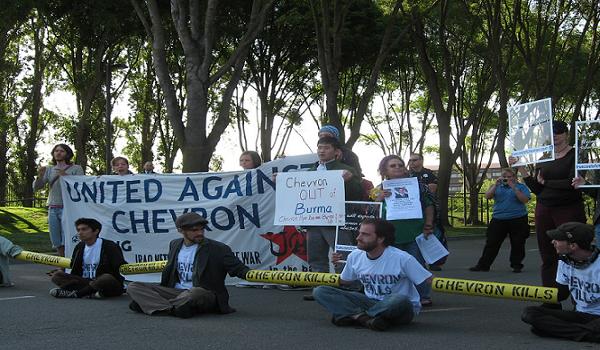 They were soon joined by myself and dozens of others lined up behind them, claiming a space for speakers to explain why we were there. Chevron security forces and San Ramon police did not attempt to remove us. Perhaps they decided not to take action in order not to draw more negative media attention than Chevron is already getting.

The coalition of organizers also produced a clever subvertisement campaign called “Chevwrong” that mirrored and mocked Chevron’s latest “Human Energy” ad campaign. Images of representatives of communities around the world are shown with a quote, such as “I will try not to breathe polluted air” along with a factoid highlighting a particular abuse in a specific region.

The week prior to the meeting, the San Francisco Bay Area saw the appearance of these images wheat-pasted on billboards and poles around town. CBS Outdoor had refused to sell ad space on its billboards. When contacted, the CBS spokesperson said that it was against policy to have attack ads that were negative in character.

Alongside this was a form of subvertisement theater organized in large part by long-time activist David Solnit, author of Army of None. The alternative campaign is meant to speak the truth about the real effects of Chevron’s actions behind the fancy rhetoric of Chevron’s greenwashing campaign. Instead, Chevron’s “Human Energy” becomes “Inhumane Energy” and the subvertisement images read, “I will expose greenwashing,” and “I will expose toxic pollution.” Activists held the ads up to frame their faces behind the subversive words and chanted in unison, “I will expose–green washing! Will you join me? Yes, I will!” 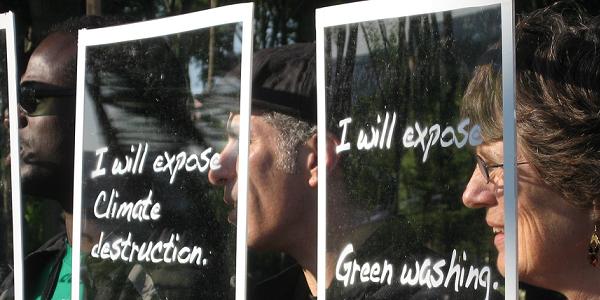 While the shareholder meeting was taking place, speakers from Amazon Watch, National Lawyers Guild, and individuals like Antonia Juhasz–lead organizer and editor of the Alternative Report–and Rebecca Solnit, author of the much-praised Hope in the Dark: Untold Histories, Wild Possibilities, highlighted the grievances against Chevron and the need to keep putting pressure on the big oil giants. One member of Iraq Veterans Against the War told about how he was reassigned from his communications/intelligence duties in Iraq to protect oil pipelines.

At about 10:30, the shareholders came out and shared what occurred in the meeting. It was reported that Chevron’s CEO David O’Reilly told them that the campaign’s Alternative Report, which he claimed he had seen, along with their grievances “are an insult to Chevron employees, and should be thrown in the trash.”

Speakers ranged from the Mayor of Richmond, Gayle McLaughlin, who reported that “Chevron’s response is emblematic of its approach to local communities—a systemic disregard and mockery of the communities in which it operates,” to Christine Cordero of Filipino/American Coalition for Environmental Solidarity, who said:

“While our communities suffer from Chevron’s toxic emissions, catastrophic spills, leakages, and explosions, David O’Reilly speaks of his hurt feelings. This is about the health of communities and, ultimately, the long term of health of O’Reilly’s corporation if he continues to choose to do nothing and ignore the costs of Chevron’s operations in the Philippines.”

Paul Donowitz of EarthRights International added that “Chevron chose to turn a deaf ear to the communities who bear the crippling consequences of its operations. Chevron’s complicity in human rights abuses in Burma, the billions in project revenues flowing to the brutal Burmese military junta who use these profits to oppress their own people are more evidence that this is a company that cares for only one thing – its bottom line.” A dozen or so people from the Burmese community, including a robed monk, were there to oppose Chevron’s actions in their country.

After the speakers finished their reports, the rally was concluded with the chant “We’ll be back! We’ll be back!”—echoing Ecuador representative Mr. Criollo’s promise that “we’ll keep fighting until the end.”

Tagged
Activism Narrative News
What did you think of this story?
Meh
Good
Awesome