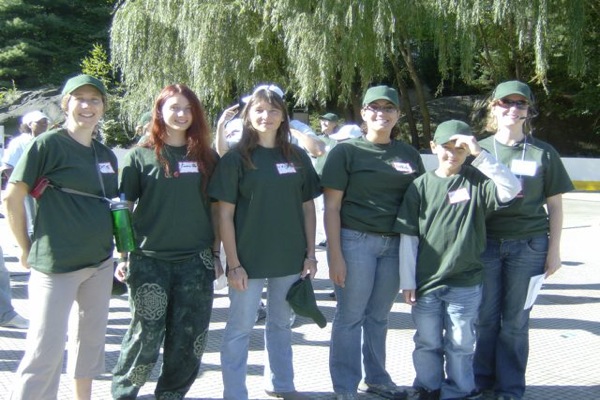 “If we have any kids, we’ll put them in Antarctica or the Southern Ocean.”

This absurdist statement was typical for choreographer Christopher Caines on Sunday, September 20, as he led a group of 2,000 New Yorkers gathered in Central Park to create a giant living sculpture for Oxfam and the TckTckTck Campaign’s Human Countdown: Climate Wake-Up Call.

I was part of that sculpture—assigned, specifically, to represent Western Sahara on the North African coast. My role as one of 600 Earthlings was simple. I was a little speck, a grain of sand trapped inside an hourglass—one of many grains of sand—and together we dissolved into the phrase “tck tck tck,” a reminder to world leaders that time is running out for them to act on global warming.

Our public protest targeted decision makers as they gathered in New York for the United Nations summit two months ahead of the Copenhagen climate treaty talks this December. But instead of shouting angrily about how they’d better get it together on a fair and binding climate change agreement, we were a close-knit community of volunteer dancers spelling out our message.

There was a foolishness to what we did, I know. What kind of crazy person spends an entire day running around in a park pretending to be a grain of sand? How could we possibly change the world?

But we were all in it together. As the choreographer reminded us: “You are the most important people here today, and you’re all here to help each other.”

And we were not alone.

The next day, in 2,632 media-saturated events in 134 countries, thousands of people allied with the TckTckTck Campaign and its partners, including Avaaz and 350.org, rallied to send a Global Climate Wake-Up Call.

We placed cell phone calls to the White House, we sent text messages to cabinet ministers from Australia, we filmed ourselves and went viral on You Tube, we tweeted, we blogged, we handed out fake copies of the New York Post with the headline “We’re screwed.”

When I was a kid growing up outside of Chicago, I sat in suburban comfort on my couch one summer and watched in awe and confusion as police clubbed and tear-gassed Vietnam War protesters rioting just a few miles from my house during the 1968 Democratic Convention. Now, climate change has become an equally urgent issue that has galvanized support around the globe.

“Who’s to say that our cause is any less just because we’re having fun and acting silly while joining in the fight?”

Some old-school protesters complain that we 21st-century activists don’t engage with the passion that fired them up back in the day. As I see it, though, the technology available through new media and the Internet has forever changed the nature of public protest. Just look at the live-blogging and mobile-phone photos that came out of the Iran elections in July.

Here in the States, it may be true that nobody is risking their life anymore by taking to the streets for a political cause. But who’s to say that our cause is any less just because we’re having fun and acting silly while joining in the fight?

And global warming is a strange enemy to fight. It’s as big as the world, and as small as tossing the bottle of soda you just finished drinking into a recycling bin. It’s a massively complex problem, and yet some people don’t even believe it’s happening. In short, doing battle with an amorphous idea requires tremendous creative energy and a well-developed sense of the absurd.

The Human Countdown was designed by Christopher Caines with the assistance of visual artist Gail Rothschild and architect Stephen Furnstahl.

“When Christopher first asked me to help with the graphics and figure out how to enlarge the hourglass/earth/text onto the huge net, I thought it sounded impossible,” Rothschild said. “But I’m always up for impossible projects for noble causes, and somehow, it all worked!”

Read dispatches from on-the-ground journalists and bloggers at TckTckTck.org’s Climate Voice, an online reporting hub where you can follow progress on the global warming debate and keep up with breaking news, live video, Twitter streams, and aggregated blog feeds.

What do you think about 21st century activism and the roles technology and even fun might play? Share your thoughts below.