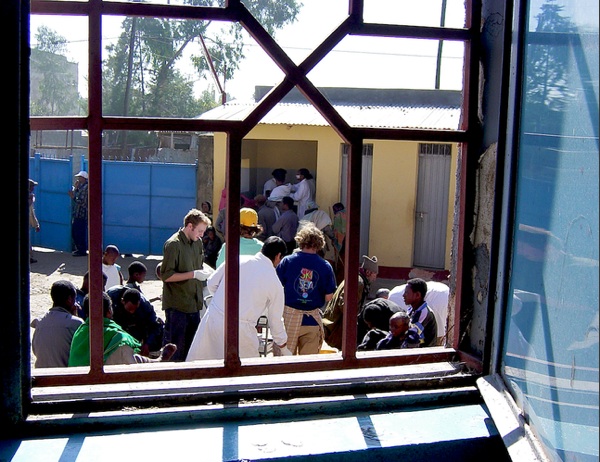 The medical clinic in Addis Ababa had no individual rooms, blood pressure cuffs, or permanent staff.

It was a Mission of Charity, rightfully titled, “For the Dying and Destitute.” Gloves often ran out, needles were reused for injections of Penicillin after being boiled, and the medical cabinet was an untidy mosaic of random medicines labeled in different languages, which had been donated by an unsteady stream of volunteers from around the world.

Dr. Abeba was the sole doctor and spent most of his time there. He had not left Ethiopia—like most of his medical school classmates—for the Western world, and made virtually no money. He became a doctor for the purest of reasons.

And after a few months volunteering in his clinic, I knew I wanted to be just like him.

When anybody asked me what my college major was before I came to Ethiopia, I used to proudly state, “geology and creative writing.” When asked what I wanted to do with that, I would just as confidently say, “I have no idea.”

Then I landed in Addis Ababa, Ethiopia to begin a six-month study abroad program. I had spent weeks trying to get in contact with the chair of the geology department at Addis Ababa University to make sure they would be offering the sedimentology class that I needed to take in order to graduate that spring.

On my first full day in Addis Ababa, while the two other students in my program and I were moving into our dormitory rooms, we were told the semester was pushed back a month because the prime minister had called for a mandatory meeting of the university professors and administration.

Just like that, our three-week orientation period was stretched into seven weeks of nothing to do.

I went to the geology department to see if there were any professors or students who could use some help, or who at least wouldn’t mind me tagging along. It took me days to find a professor, and none of the students took me seriously when I told them I was also a student there. They laughed when I showed them my student ID. They could not understand why an American would choose to come to their university, when all they wanted to do was leave and go to the United States.

Not even the professors were aware of the study abroad program (who could blame them—there were only three of us, and it was the first program in five years because of war and violent demonstrations on the campus), so they did not believe me when I told them that I would be taking their class.

Finally, I found the chairman of the geology department, who told me that there was nothing I could do for them. When I asked him to double-check if the sedimentology class would be offered, he said, “I don’t know, we will see if the professor shows up on the first day.”

Desperate for something to do, I found the Mission of Charity.

“As we entered the first room, he turned and said, ‘Welcome to God’s waiting room.'”

I was greeted by a mentally challenged child who could not stop drooling or smiling, and his best friend, a 10-year-old dwarf. They got bored when I could not communicate with them and ran off to play with a ball made from rope and crumpled paper.

I cautiously waited by the entrance, where I could see nuns hustling between dozens of people. A foul smell emanated from the compound, and it got denser as I approached. I peeked through a doorway and saw a room crowded with cots holding slender, shallow figures whose eyes glowed big and white in the darkness.

Dr. Abeba arrived and showed me around the building. As we entered the first room, he turned and said, “Welcome to God’s waiting room.”

For the next six months, I helped care for patients. There were amputees with infected limbs, tuberculosis victims with wounds carved deep into their necks, and babies with blistering burns.

One soldier, who spoke a little English and Italian, had a bullet lodged in his thigh from 10 years ago, when he was fighting on the front lines of the war with Eritrea. Now, his thigh was grossly swollen and there was a hole that leaked puss.

Space was so limited that at night two, three, or four thin bodies would crawl onto a single cot without hesitation, thankful that they had a bed to sleep in and a roof over their heads.

On Tuesdays and Saturdays, there was no other place for the makeshift outpatient clinic except for outside. Dozens of patients waited, sometimes all night, for the thick, metal, baby-blue gates of the compound to rumble open so they could file inside. They all had wounds that would not go away because of immuno-suppressed bodies and lack of resources to keep their wounds and bandages clean.

Most of the time, when someone returned a week later, their once-white bandage would be blacker than their skin, and often damp or wet. I would say with all my might, in my ugly, broken Amaric, “KEEP IT DRY AND CLEAN, PLEASE!” They would always nod their head, laughing at my effort to speak their language, and say, “OK, OK.”

I soon found myself obsessed with going to the clinic. There was no place I wanted to be more. Geology was something that I enjoyed, but now I had found a passion. Every Tuesday and Saturday morning I, along with a couple of other volunteers, arrived early and set up the benches in a square shape for the people to sit on, making sure that there was enough room for us to work in the middle. Then we would wait, with our gloves on, for the rumbling of the blue gates.

This piece was originally published on Glimpse and has been republished here with the author’s permission. Check out more writing by correspondents like Adam Goldstein- visit the Glimpse site.

Tagged
Narrative Ethiopia
What did you think of this story?
Meh
Good
Awesome

The Most Breathtaking Geography in Ethiopia