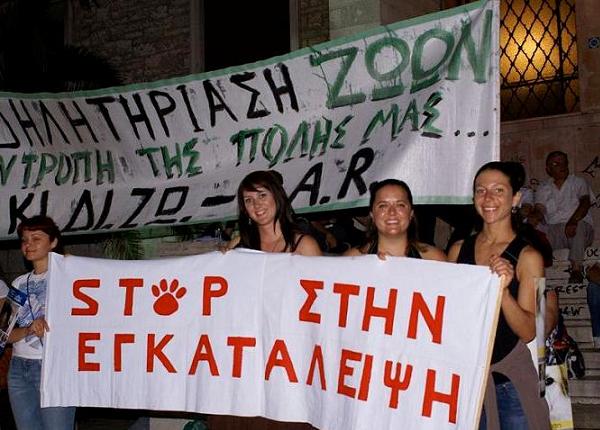 We have wrapped up the volunteer portion of our trip. It was kicked off by being picked up by local animal activists in Athens and taken to the ONLY licensed animal shelter in a city made up of millions of people.

The amazing people at the KAZ shelter run the facility on a shoestring, doing as much as they can to help forgotten and discarded animals who have nothing but love to give. We brought the shelter hundreds of dollars in medical supplies, and I was excited to give a personal donation I knew would definitely be put to good use.

After departing the Athens shelter, we headed up to the mountain town of Ioannina. There is no animal shelter in Ioannina, a town of 150,000 people, but there is a handful of concerned citizens who dedicate their lives, their homes, and their finances to help homeless animals.

“Having been an activist in America, it was exciting to experience this feeling in a foreign country, and even more exciting to see how well it was received.”

We spent most of our time at the homes of these dedicated activists, helping prepare for a protest about the poisoning of stray dogs in the city. Having been an activist in America, it was exciting to experience this feeling in a foreign country, and even more exciting to see how well it was received. Young and old alike welcomed the information and took the time to read it. Our group took great pleasure in seeing our work first hand and found it very motivating to continue on.

I personally took great pleasure in leafleting outside the mayor’s office, the man everyone knows is responsible for executing the rash of cruel poisonings on the animals. I handed a leaflet to everyone I could who was entering the building in the hope it would cross his desk.

A silent vigil was held on the evening of our fourth day in Ioannina. We were thrilled with the turnout. Many more people came in support than I had imagined and numerous media outlets appeared.

We also built feeding stations and placed these in strategic locations around the city where strays congregate. The most surprising was the scene at the local university, which looked like inner city projects in the US. We were surrounded by concrete buildings riddled with graffiti, trash, and teens with no real concern for the pack of starving animals with whom they shared this space.

We were shocked to see a small puppy stroll out from behind a bench and head right toward us, not yet afraid of humans as many of the older pups were (not than any of them live long – the average age is 18 months before they are poisoned or hit on the road).

I began chatting with one of the students and he explained that many people dump puppies at the university, thinking they will be taken care of. He said there are new litters every week. He pointed me in the direction of the dumping site, and I spent a good hour searching around what would be considered a trash dump in the US. No puppies were found but I did make friends with various cats that were starved for attention.

I am sad to say this portion of the trip is coming to a close. I have greatly enjoyed the interaction with the local activists. I have formed lifelong bonds with even the ones who I was unable to have a conversation with because we share a passion that we hold deep in our hearts.

To learn more about the organization with which the author volunteered, visit Inside/Out. To create your own volunteer experience, browse through Matador’s member organizations, which offer volunteer opportunities around the world.

Tagged
Activism Narrative Volunteer
What did you think of this story?
Meh
Good
Awesome