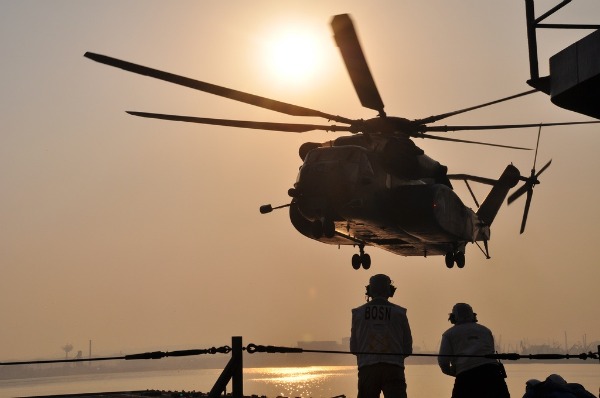 MH-53 Helicopter lands on the USS Tortuga. Photo by Official US Navy Imagery

“DON’T WAIT UP for me tonight,” my husband said Friday March 11 at 4:00 pm Japan time, one hour and 14 minutes after the 9.0 earthquake shook the mainland.

At that moment, he was walking into an emergency meeting to help coordinate rescue efforts. 4 days have since passed, and he (and every military member I know) has been working nonstop. We’re part of the American Marine Corps community in Okinawa.

The US Military, which has about 90 bases in Japan, is assisting in a recovery effort called Operation Tomodachi, or “friend.” They’ve delivered food, water, supplies, generators, transport, fuel, and manpower.

The response to the devastated area was immediately put into action even while Okinawa itself was under tsunami warning and evacuation orders. (Okinawa suffered no serious damage)

The challenges of supplying aid to the region include damaged roads, bridges, congested waterways, flooded airports and airfields, repeated aftershocks, and now threats of nuclear contamination. Even so, US Military has provided Sendai and surrounding areas humanitarian assistance.

Within hours of the earthquake, a high-speed ferry and aircraft dispatched from Okinawa to the affected region offering communications equipment, supplies, and fuel.

8 ships of the US Navy’s 7th fleet are currently positioned on the east coast of Honshu. They include the USS Ronald Reagan, serving as a floating refueling base for Japanese self-defense forces, Coast Guard, police, fire, and civilian aircraft. The 7 other ships in the fleet are being used for search and recovery operations. 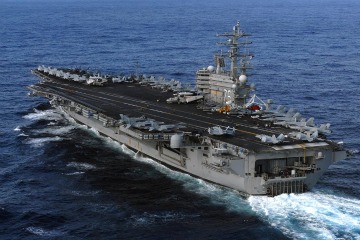 The USS Ronald Reagan. Photo by Official US Navy Imagery

Five other military ships are en route to Japan from other regions of Asia. The USS Tortuga will deliver MH-53 helicopters. 300 Japanese troops and 90 vehicles to the area. The USS Blue Ridge is travelling from Singapore to provide disaster relief kits. The USS Essex was dispatched from Malaysia to assist in rescue efforts.

Thousands of American military are in the region to help the Japanese government as needed, including many spouses of my friends and neighbors living here.

Currently other US duties include distributing food, blankets, and supplies and surveying damage, but troops are likely to take on communications and medical support soon.

In all honesty, these past few days my husband has not shared many details about what rescuers are up against. When he gets a rare chance to check in, he’s emotionally spent.

But he does believe challenges are mounting. US military personnel and aircraft have tested positive for low levels of radiation and infrastructure in some areas is so badly damaged that relief efforts are thwarted.

However, as I watch news coverage, I’m in awe of Japanese and international rescue workers who perform their difficult jobs. Considering the challenges, I’m relieved there’s been little criticism over rescue efforts. I’m also grateful for the people working so desperately to help.

The United States is not alone in offering aid to Japan. 90 other countries and 6 organizations have offered donations, rescue teams, and other support to victims of the earthquake and tsunami.

Please check Matador’s guide to How You Can Help the Earthquake and Tsunami Victims in Japan.

39 of the most breathtaking natural wonders in the world
This map of the US compares state populations to that of world countries
How to plan for 2021 travel in the age of COVID, according to 23 travel agents
For the perfect day of hiking and Colombian coffee, head to Jardín
The spookiest mythical creature in every country in the world