Magamba Network is an organisation of artists and organisers based in Harare that pushes cultural, media, and youth activism into the Zimbabwean socio-political arena using urban arts as a vehicle for progress. Set up in 2007, the organisation has struggled through sparse and derelict years in Zimbabwe and emerged as a booming megaphone for youth to express social ills through hip-hop and the spoken and written word.

The word Magamba is significant in itself — a term associated with heroes that fought for liberation decades ago, now adapted and reinvented to empower youth.

Full disclosure: In addition to being a staff writer here at Matador, I’m the editor at kalabashmedia.com, a Magamba platform for young writers and photographers. I’ve been closely tied to the organisation for years as an artist and freelancer. 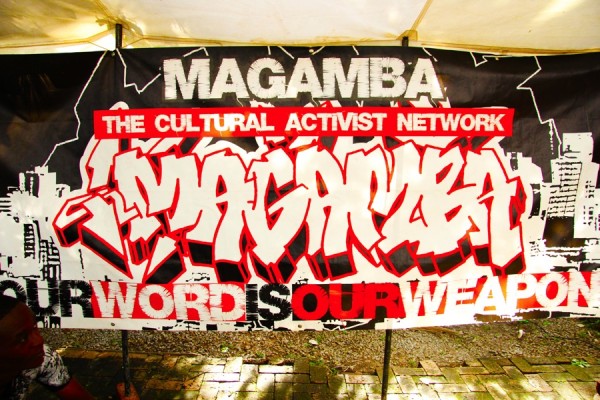 Magamba runs an internship programme that is flexible depending on the schedule and skill set of the applicant. There are 5 main projects; interns have the opportunity to be involved in one or more. This could include helping organise the annual Shoko International Hip Hop and Spoken Word Festival, co-editing and writing for Kalabash (a site hosting young voices, opinions, and stories), working with an artist agency to promote new artists, outreach in schools, working with the country’s only fearless satirical comedy show, and organising community events in Harare and its outskirts.

Aside from feasting on, and contributing to, a positive and progressive work environment, interns get to see Harare from the perspective of a community of urban artists and organisers, through the eyes of young activists, and to hang out with inspiring young thinkers and doers inside and outside of work.

The 5 programmes run by Magamba are:

In 2011, after hosting monthly events, Magamba started Shoko Festival. This has become Zimbabwe’s fastest growing festival, with crowds expanding from 1,500 in the first year to 3,000 in the second. In 2013, Shoko expects to welcome at least 5,000. Shoko incorporates concerts, comedy shows, poetry slams, debates, workshops, and exhibitions into its week of events. The aim of the festival is to provide a platform for urban artists (emcees, DJs, dance crews, spoken word and graffiti artists) to tell stories through their craft; it’s about breaking barriers and creating dialogue. It’s also about emphasising the global struggle and building on the unified movement for social justice.

In the past two years, Shoko has featured multiple artists from the US, UK, Germany, South Africa, Botswana, and Kenya.

Interns working with Shoko could be involved in:

The Peace in the Hood concerts are also extremely successful. The vibrant outdoor events at popular township shopping centres see live hip-hop and spoken word acts performing and encouraging peace in the community. Over 500 young people attend each event. The Streets Live event has a global flavour, as it features impressive international artists as well as members of Zimbabwe’s spoken word and hip-hop scene.

Comedy has grown significantly as an art form in Zimbabwe over the last few years. As part of this movement, Magamba initiated the monthly Bang Bang Comedy Club, which has become one of Harare’s premier comedy nights, featuring top names in Zimbabwean comedy.

Interns working with community events could be involved in:

The B.theMedia Project is all about promoting free expression through new forms of media activism and citizen journalism. Magamba trains young citizen journalists in blogging, podcasts, and reporting in order to empower them with the tools to spread their message. Magamba has recently launched Kalabash, a cutting edge youth site on politics, culture, and society. This is a rare open space for young artists, writers, photographers, and filmmakers to express themselves and share their impressions of life in Zimbabwe. As the site grows, so does the need to push the boundaries creatively.

Interns working with Kalabash could be involved in:

This comedy series has become hugely popular across Zimbabwe and further afield. Zambezi News is a project that was initiated by Magamba in September 2011, and it has already caused quite a stir and generated significant publicity and interest. A parody of a typical Zimbabwe Broadcasting Corporation news programme, Zambezi News satirises the relentless propaganda and astounding journalistic ineptitude on state TV through its comical news presenters.

Interns working with Zambezi News could be involved in:

Magamba acts as a stable and agency for the new generation of socially engaged urban artists, and coordinates recordings and album launches for artists from its network. The organisation also promotes artists to events and festivals within and outside the country, as well as coordinating international collaborations, mix tapes, and the like. Artists from the network have toured festivals across Africa and overseas. Magamba produced the Monkey Nuts and Hope Masike EP Something Out of Nothing in 2012 and is currently working on the full-length album with French producer DJ Oil. Meanwhile, one of the planned exchanges this year will see the talented Zimbabwean rapper NTM performing at the Festa 2 H hip-hop festival in Dakar, Senegal.

Interns working with the artist agency could be involved in:

Here’s a personal account of the vibe in the reception from last year’s guest from NY, Martha O’Donovan:

I’m sitting at my desk on the bottom floor of a flat which serves as an office for an organization called Magamba in Harare, Zimbabwe. It is just a few weeks after the end of my sophomore year at NYU and my first week interning with Magamba. Sitting on the couches and chairs around me are a group of guys, somewhere between 18 and 22, who are working on laptops or drinking coffee and eating toast. Music is playing from one of the computers while a few other guys bob their heads to music coming from headphones.

These guys are all a part of the Mashoko Youth, a group of young rappers who are interested in developing their skills as musicians and community activists. In the Magamba office, they spend their spare time blogging on shared computers about community issues and writing or sharing recent raps that reflect their opinions and ideas. More than just for work, however, the bottom floor of the office is a safe, resourceful space for a good group of friends to hang after class and work.

Tagged
Expat Life Harare, Zimbabwe
What did you think of this story?
Meh
Good
Awesome

How To Piss Off a Zimbabwean

A Freestyle on Leaving Zimbabwe