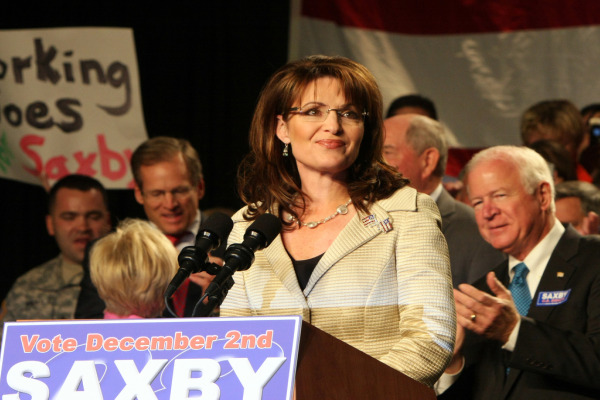 Last week, the Southern Baptist Convention officially denounced divorce. Their Bible-thumping decree couldn’t help bring back fond memories of SPC’s 1998 proclamation that “a wife is to submit herself graciously to the servant leadership of her husband.”

And The Atlantic’s July/August cover story, by Hanna Rosin, brazenly countered “The End of Men-How Women are Taking Control of Everything.”

Something’s stirring here and it sounds a little familiar.

Women getting too powerful? Let’s lay down antiquated, selective inerrantist proclamations to make Rush Limbaugh-listening men and the women who love them feel better about their lives.

While we’re at it, let’s make a role model out of an insipid Alaskan pro-life talking head who will gladly espouse conservative, gender discriminatory doctrine under the guise of femininity and (go girls!) women’s power.

For the first time in history, women have the undeniable opportunity to be equitably powerful, to make all of our own choices in our lives and have the same opportunities as men.

According to Hanna Rosin’s article, women became the majority of the workforce for the first time in US history this year. 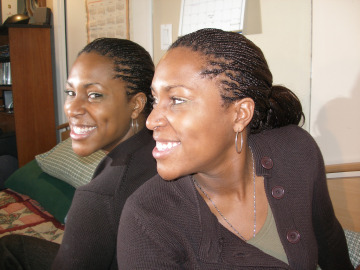 And for every two men who get a college degree in 2010, three women will do the same.

Women live longer and are, arguably, better suited for the modern post-industrial age. According to Rosin, the attributes most desirable today, “social intelligence and open communication… –are at a minimum, not predominately male”.

Women don’t even need a 1:1 ratio of men to biologically procreate–not to say anything of the complex roles of parenting.

Despite these statistics, there is still a prevailing wage gap between men and women. One that can still be attributed to gender discrimination. As of 2006, women earned 76.6 cents to the dollar to men. African-American women earned 64 cents to the dollar, and Hispanic women’s earnings dropped to 52 cents per dollar earned by white men.

Not only are wages inequitable, but women continue to assume most child care and the upper echelons of society are still male-dominated.

Under then-President Bush, we saw cutbacks in programs vital to women’s health, reproductive rights and education. Much of this was done covertly, but when it was brought out in the open it was justified as budget-cutting for the war. The emphasis on the individual at the expense of government programs was also a feature of [Bush’s] administration. There has been increased violence in our popular culture on the one hand, and a hypersexualization of women and girls on the other, in our post-9/11 society…There have been reductions in childcare facilities and vast food insecurities (a euphemistic term for hunger) due to wage decreases, the reduction of food stamps and the like. Something often overlooked is how many women’s studies and women’s history programs have been put on the chopping block because schools had to make reductions and these are among the first [programs] to go. This hurts the awareness of what is happening to women’s rights.

Unfortunately, the story of how circus elephants are trained in learned helplessness resonates as I write this. When young, the elephants are attached by heavy chains to deep stakes in the ground. After ineffective struggling, the elephants give up, learning they cannot pull free. From that point on, even if the elephant has a slender rope loosely tied, it will not try to escape.

As Gavin de Becker wrote, “Because it believes it cannot, it cannot.”

Don’t turn your back

It feels the women’s movement is now being used against us by the Christian Right, bottling their brand with the fresh new label “female power”.

And Sarah Palin is their number one spokeswoman. God help us all.

In Lisa Miller’s Newsweek article, Sarah Palin has become a pro-life role model, if not “prophet, ordained by God for a special role in the cosmic battle against the forces of evil.” 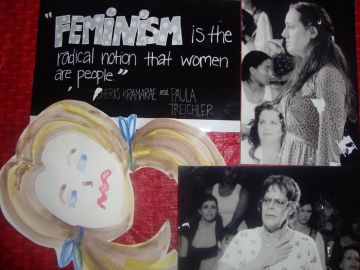 In 2010, 11 states passed anti-abortion laws and 370 anti-abortion bills were introduced in state legislatures, according to the Guttmacher Institute.

Sarah Palin has even started to describe herself as a feminist (gasp! dirty word) due to her family values and devotion to her children.

Palin says old feminism is a relic of “the faculty lounge at some East Coast College.”

Sarah Palin has even started to describe herself as a feminist (gasp! dirty word).

According to Miller, these women, instead, seek to “submit to male authority and conservative theology while assuming more visible roles in families, churches, communities, and the world.”

Staying submissive to men and conservative theology while being powerful isn’t just a non-sequitur. It’s hollow, just like the puppets these women, who are a loudmouth spout of men’s values, end up being.

Despite the fear of the power the Christian Right have on America– the Southern Baptists are the largest Protestant demonimation in US and have 16 million members alone–the group to be worried about are the Buchanan-coined “silent majority”.

By not getting more outraged that we –women– are likely paid less, treated poorly or ignored, stripped of our ability to choose, denied medical rights and childcare, and generally discriminated against while we’re in the population, college, and workforce majority, we do the worst damage to feminism. 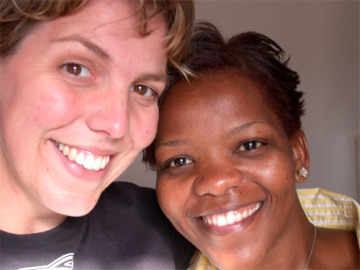 We set ourselves back, other minorities back, and the rest of the world’s women back, by not demanding the right to make all of our own choices and have access to equal opportunities.

So what can we do?

Educate ourselves about the history of women and the incredibly complex relationships between the sexes, stay aware of introduced legislation and write your congressmen/women, demand raises and equal treatment in the workforce, and support our fellow women’s choices, whatever they may be.

You can also check out the Feminist Majority Foundation and the Association for Women’s Right in Development for more information about events that fight for equality around the world.

Tell us what you think. Any ideas? Arguments?

Do you think that Feminism is Dead and James Chartrand Killed Her?