DURING A RECENT TRIP to Victoria Falls, Zimbabwe, our group came across Lion Encounter, a local excursion where you pay to walk with lion cubs, an “only-in-Africa” type of experience. According to locals, it is an extremely controversial operation. I thought of my experience swimming with dolphins in Mexico, where I found out later the deleterious effects it has on cetaceans.

Not wanting the same chastisement from my animal rights-devoted mother, I researched online if Lion Encounter was legit. I couldn’t find a thorough, objective breakdown on the controversy. After a short debate, our group decided that we had to find out what it’s really about and if we could reasonably recommend it to others. 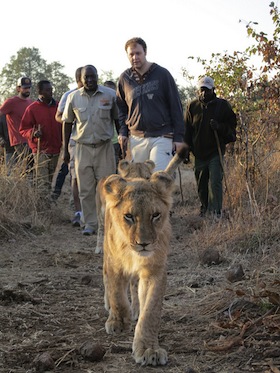 Over a perfectly timed 45 minutes, we were introduced to the cats, given sticks for the walk (to either distract the lions or gently reprimand them if they got too close), and given ample opportunities for pictures and video of us with the lions, if we wished.

We were also told that the cubs get taken out of the walk rotation when they hit 18 months. After that they’re mostly locked up, with some opportunities to go out and hunt, based on the precepts of the project.

What the organization is about

From what I found out, there are a few key misconceptions about Lion Encounter that are shared by both tourists and locals. With many animal excursions claiming to be about conservation, it’s possible that people have confused this activity with others in the region.

Neither is the case.

Lion Encounter is the commercial aspect of what is branded as a captive breeding project. It is one of the projects under the umbrella of ALERT (African Lion & Environmental Research Trust), which is a registered UK charity that states their mission as “dedicated to the facilitation and promotion of sound conservation and management plans for the African lion (Panthera leo). By means of a responsible development approach we aim to realize the species’ potential to provide substantial social, cultural, ecological and economic benefits.” 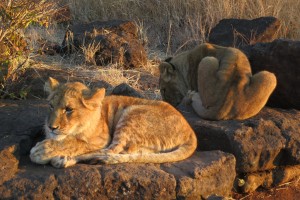 Antelope Park is ALERT’s bigger lion walking project, located in the center of Zimbabwe. Lion Encounter is its younger sibling. During the excursion, the staff emphasized how much lions are encroached upon and how not enough is being accomplished through traditional breeding programs.

In their attempt to stem this, they’ve set up a project that involves four stages. (To date, encumbered by a lack of funds, they’ve only achieved the first two of these stages.)

The four stages are:

The staff was clearly excited about their respective roles at Lion Encounter. Dan Matthews, one of the Volunteer Project Managers, admitted that he was originally unsure about the project. “I was in Thailand doing conservation. I was very skeptical about coming to a lion project in Africa. I came to just see what it was about. I was very interested in the way they were doing things. I learned about the project, learned about the four stages, and basically fell in love with it.”

Matthews spent seven months as a volunteer before getting a paid position with Lion Encounter.

He acknowledged that there were a lot of controversies surrounding the project, starting with the fact that it’s a commercial operation. One major problem, Matthews explained, is that “people don’t realize we’re a completely self-funded organized. Therefore, the government doesn’t help us. They don’t subsidize us in any way. So how are we going to make enough money to build release sites, to build fences, to buy the game for these release sites, unless we have some sort of commercial aspect?”

She is very beautiful. Importantly, she is the future.

Concerned about the plight of lions and excited about his work, Matthews swelled with pride when talking about the lioness that he saw as the future of the project: “We’ve got the 15-month-old cub. Her name is Alpha or AT1. We affectionately know her as Wakanaka in Shona, which means beautiful. She is very beautiful. Importantly, she is the future. She has assisted in a zebra kill. She has no human contact. She’s learned all of these hunting skills from her elders, which is exactly what we need.”

He repeatedly made the tourist aspect sound like a necessary evil, going so far as to say, “If we had a donor that came and gave us X million dollars — 20, 30 million dollars — we wouldn’t need to do these commercial lion walks with guests. The only reason we’re doing this is to generate funds.”

Matthews — who was the main (and, in my opinion, genuine) face that we saw — doesn’t have any conservation background beyond that of a volunteer. “I used to work in a nursing home in the UK. No zoological background, but I was a very keen conservationist. It was just sort of my passion.”

I later contacted the US Fish & Wildlife Service and various zoos to get more information. All of them pointed me toward Panthera, founded in 2006, the self-described “world’s leading organization devoted exclusively to the conservation of wild cats and their ecosystems.” I spoke with Panthera’s President, Dr. Luke Hunter, about Lion Encounter and similar captive breeding lion projects.

An expert’s take on Lion Encounter

Hunter agrees with Lion Encounter on the urgent need of wild lions: “They’re not wrong that lions warrant the conservation attention. Lions have lost 82% of their historic range in Africa.” But his agreement ends there. Regarding the ideas behind the project, Hunter says, “They sound like science, but they’re not. They’re quasi-science and they just don’t hold water.” He added, “They are not helping conservation. They do not make a contribution. There is simply no need or science-based rationale to consider captive lions.”

Hunter’s main problems with the project:

1. There’s no evidence that they’re succeeding.

“They’ve spent however many millions of dollars charging folks like you to go and cuddle their lion cubs and they haven’t released a single lion.” (His assertion is based on a comparison to wild translocation, which he claims has put “more than 40 populations with over 450 reintroduced lions and their offspring” into the wild.)

“Almost every consumer is told that it’s all about conservation and the majority of those visitors want to feel like they are making a contribution to conservation. Most tourists do not understand that there simply is no conservation value in it.”

3. It isn’t where the money should be going.

“It potentially distracts from the enormous real conservation needs for what should be taking place with wild lion populations.”

Instead, Hunter recommends visiting Africa’s protected areas, where the money “really goes into conserving big protected areas and the lion populations they contain.” One great option is Hwange National Park (Zimbabwe’s largest national park), where our group later got to see two lionesses hanging out in the grass. (More information on Zimbabwe’s national parks can be found on their official site.)

Hunter doesn’t completely reject the science behind captive breeding, but thinks lions are nowhere near the level of endangerment required for it. He cited positive uses of such programs, including the California condor, black-footed ferret, and Iberian lynx.

In 1987, the California condor was at only 22 existing birds, all in captivity. Through captive breeding, there are now 405 birds — 226 wild and 179 captive. In the middle of the 20th century, black-footed ferrets were believed to be extinct. Rediscovered in Wyoming in 1981, a captive breeding program was enacted, which resulted in over 1,000 black-footed ferrets, with more in the wild than captive.

The World Wildlife Fund has called the Iberian lynx “the most endangered cat in the world”. Considered close to extinction, captive breeding programs enacted since 2003 have given hope to the species.

I asked Hunter if he thought that this was something that a tourist should feel bad about going to. It wasn’t as straight forward as I expected:

“It’s not immoral. If someone goes all the way to Africa and they just spend their money cavorting with lions, I think they’ve wasted a massive opportunity. There’s nothing like going to the big protected areas of Africa and seeing wild lions. Lions are really unusual among cats in that you can go to many protected areas and they’re really visible. They’re really used to tourism vehicles.

Tagged
Travel Zimbabwe
What did you think of this story?
Meh
Good
Awesome

9 signs your girlfriend is from Zimbabwe

Saying goodbye to our Marley

On how my tongue went dead

5 fun ways to get arrested in Zimbabwe

The only DJ in the bush

13 signs you were born and raised in Zimbabwe