A FERN OF SCARS grows across her face. Her voice is weak. It makes the kind of noise you hear after waking from a dream — the soft trespass of a ghost or thief.

Mexico’s President, Enrique Peña Nieto, tiptoed around many soft-spoken victims in the hospital after a January 31 explosion at Pemex headquarters in Mexico City killed 33 people and injured 121 more. Pemex is the country’s national oil company, created in 1931 when Mexico nationalized the oil industry.

What do we say to the victims of the Pemex explosion and their families? Photos of Peña Nieto show him huddled around the white of hospital sheets, listening to storytellers who have suffered profound loss, touching their wounds as one might stoke a fire. The words of Andrew Solomon, author of The Noonday Demon: An Atlas of Depression, might be more appropriate. Solomon wrote that, “To be creatures who love, we must be creatures who can despair at what we lose, and depression is the mechanism of that despair.” Since then, he has clarified his point, saying

…the most fundamental capacity as human beings is the capacity for love, and this feeling of love couldn’t exist without a range of other feelings that surround it.

No Mexican author describes the “range of other feelings that surround” love better than Octavio Paz. In various essays, from “Hieroglyphs of Desire” to the collection “Labyrinth of Solitude,” Paz wrote extensively about the ways in which eroticism, the Mexican celebration of death, the country’s mestizo history, and the Mexican proclivity for solitude all informed his own capacity for love. Paz acknowledged this cultural phenomenon when he wrote that “the Mexican…is familiar with death, jokes about it, caresses it, [and even] sleeps with it.”

Unfortunately, this rich interplay between cultural identity and response to loss takes place against the backdrop of random violence and frequent accidents, like the Pemex explosion. The government-owned Pemex has a long history of fatal incidents. Before this most recent explosion in Mexico City, 30 died in September 2012 at a Pemex plant in the city of Reynosa. More than 300 were killed when a Pemex natural gas plant on the outskirts of Mexico City blew up in 1984. 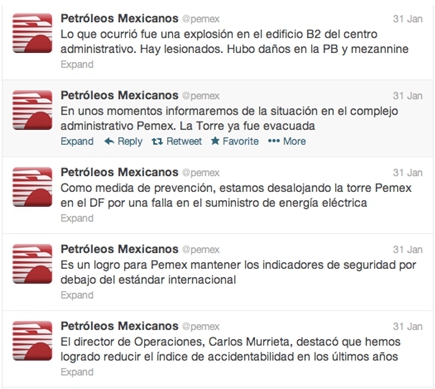 The pain that victims and their families are feeling reinforces a general lack of trust in what the government tells its citizens about safety.

For example, just hours before the deadly blast, Pemex tweeted that it had reduced the number of accidents in recent years and that, “It is an achievement for Pemex to meet international safety standards.”

Less than three hours later, the next tweets began detailing the explosion and loss of life.

I talked with one man who was at a protest in Mexico City in the days leading up to Peña Nieto’s inauguration. He spoke fast, and all I could hear was hard consonants as he swallowed his vowels. Spanish, in his mouth, sounded like rolling dice in my hand. He rarely spoke in short sentences. When he did, it sounded less like a declarative sentence and more like a bet. Throughout my interview with him and others in the Zocalo, I heard a common refrain about the reality of life in Mexico: A lot of people are nervous and not at all confident that current levels of government accountability are sufficient to stem rising insecurity or incidents like the Pemex explosion.

A major obstacle is “Relajo,” a “gelatinous slackening of norms which permits a limited insubordination, a measured relaxation of the rules of social behavior.” The Pemex plant is at the heart of Mexico’s attempt at modernization — a symbol of both the country’s paternal state and its efforts to revamp its economy, to do away with Relajo. In his 1969 book Profile of Man and Culture in Mexico, Samuel Ramos wrote about how preoccupations with sexism, death, and machismo often comically impede Mexico and its people in this quest.

And then there’s Roger Barta, who once wrote that Mexico has two realities, one that is shown to the world, and another defined by

…illegal profits, sexuality without eroticism, wealth without work. There is in the punning and the feints a subtle invitation to bribery: the rules of the game are founded in a common venality that allows the Mexican to evade the police, swindle the feeble minded, escape from homosexuality, obtain intercourse easily with other women while avoiding being made a cuckold by one’s own. The pelado [the poor] live in a world that, in order to function, needs to be oiled regularly: thus, a shifting society is built in which at any moment, everything can lose meaning, and civility becomes slick and lubricious.

In short, when read together, Barta and Ramos suggest that modernization will be difficult without greater government accountability and changing cultural attitudes towards Relajo and machismo. The price of failure can be events like the Pemex explosion, or worse.

When I see photos of Peña Nieto gathered around the hospital bed, I begin to use Solomon’s reflections on love to understand Paz’s writing on solitude — the Labyrinth of Solitude has two exits, poverty and power. Barta and Ramos would suggest, perhaps, that our capacity for love fits through one, but not the other.