[Editor’s Note: Lauren Quinn spent the spring in Phnom Penh as a Glimpse correspondent, examining narratives of trauma and the long-term effects of war. After exploring Cambodia’s past and present, she also got a peek at its future, courtesy of the Sofitel Phnom Penh.]

I am standing in front of a mini-bar in the first new five-star hotel to open in Phnom Penh in 20 years, staring at a thin, single-serve packet of Nescafe.

The Pellegrino, the bottle of white wine, even the Mars chocolate bar in the refrigerator—I don’t even consider these indulgences. But a cup of coffee would go damn well with the welcome spread of house-made mini-eclairs and Belgian chocolates sitting on the marble coffee table of my Superior room.

I pull out the water heater and open the packet with apprehension. I think back to the last Western hotel I stayed in: a Super 8 in Austin, Texas. Nescafe was free there. But then again, so was the Wifi.

Sofitel Phnom Penh Phokeethra has been open one month. It’s the French luxury hotel chain’s second property in Cambodia, its Siem Reap location a success. Set back from swarming Sothearos Boulevard by a half-kilometer of green lawn and security guards, it claims to mark a new era in Phnom Penh, taking it, GM Didier Lamoot is quoted as saying, “from maybe-visit to must-visit for upscale travelers.”

Which is categorically Not Me.

As two gloved doormen welcomed me into the coffered-ceilinged, crystal-chandeliered lobby, I felt the way I did as a kid at our family’s annual “fancy dinner”: awkward and giggly.

In my dust-covered Toms and cleanest dress, the only other guests I saw were brisk-walking Chinese businessmen. Meanwhile, a cavalry of staff stood poised behind counters; a lovely receptionist handed me a welcome drink of lemongrass tea. 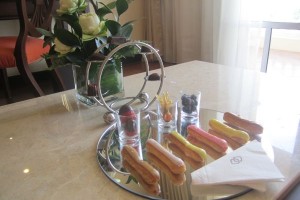 I take my Nescafe and a chocolate onto the balcony. There’s no furniture, so I lean on the railing. It’s curiously quiet, the din of the motorbikes a faint whir. Swallows swoop in the late afternoon sun. I can see the familiar skyline of the city that has become my temporary home—the Royal Palace, Canadia Tower, the contour of the Bassac River. It seems far away and muted, as if I was looking at it through glass.

Immediately below me, just outside the manicured green lawn and palm trees is a fenced vacant lot: “Kings Estate Luxury Villas” reads the billboard. Outside the fence, on the muddy riverside, I spy a man squatting in the shade, his food cart parked beside him. A woman has rolled up her sarong and is wading thigh-deep amid the lily pads of the river.

Outside, I think, it is still the Phnom Penh I know.

**
“Hello, Miss Lauren,” the pool attendant smiles as he spreads a towel out over the cushioned lounge chair. “Would you like a beverage?”

“Ot tey au koon,” I smile, unwilling to break my hard-earned habit of answering in the little Khmer I know. I lay out in my $6 Russian-Market bikini. At a sweltering 3 PM, the pool is empty other than me. It isn’t long before the attendant brings me an iced water and a skewer of fruit anyway: “Our compliments.”

I look out from behind my scratched, knock-off Ray Bans. Behind the empty row of lounge chairs, behind the greenery abutting the fences, I can see a construction site on the other side of the river: another lot of private luxury villas, skeletal structures with uniform tiled roofs.

Since the Khmer Rouge, Phnom Penh hasn’t had traditional rich and poor neighborhoods. When people returned to the decayed city in 1979 after nearly four years of absence, they resettled in any flat they could find. The result was a hodge-podge of a city, where, say, doctors live beside families of squatters, wealthy expats and old women selling cigarettes from their living room.

But all this is changing. With foreign investment pouring in, Phnom Penh has crisp sidewalks and new skyscrapers raising up. The area the Sofitel occupies, filled with embassies and empty lots, is ground zero for redevelopment. “The city center is shifting down,” the young French manager in a tailored suit would later tell me. “Where we are will soon be the new center.”

Sofitel Phnom Penh is after a different demographic than its Siem Reap counterpart: businessmen, ambassadors, investors, the people who are literally changing the physical landscape of the city. Like the construction sites surrounding it, the hotel’s eight restaurants, its spas and boutiques, its fitness center and pool are largely empty right now.

I look at the cranes behind the beach umbrellas, and think, “It won’t be for long.”

Beneath the cranes, I notice rows of tin-roofed shacks where construction workers and their families have set up residence. Laundry billows and smoke rises; children run along the riverside. The juxtaposition makes me laugh out loud.

I watch the tattoo of a swallow shiver on my chest. “And where do you fit into this?” I ask myself.

“‘Did you enjoy your stay?’ the receptionist asks as I check out. ‘It was lovely,’ I reply, and I really mean it. I’d taken two hot baths, and eaten the macaroons that had magically appeared at something called turn-down service. I’d watched the BBC while running on the treadmill in the gym, been given a personalized culinary tour of the breakfast buffet by the chef.”

As awkward as I feel in the hotel, I remind myself that I am still staying there. It’s an awareness I’d had before, living in the city—that I was, purely by virtue of the passport I held and the language I spoke, immediately upper-class. It doesn’t have much to do with the amount of money in my bank account; it has to do with opportunity. My first week, I’d been casually offered a job that paid per hour more than an average construction worker—the kind whose shacks I’m now gazing at—makes in three days.

I might not be a Chinese businessman or a French ambassador, but I still had connections that could land me in the Sofitel.

“You can’t ever forget that,” I tell myself, spraying a little more sunscreen over my white-skinned limbs. “Even if you are stressing over a packet of Nescafe.”

**
“Did you enjoy your stay?” the receptionist asks as I check out.

“It was lovely,” I reply, and I really mean it. I’d taken two hot baths, and eaten the macaroons that had magically appeared at something called turn-down service. I’d watched the BBC while running on the treadmill in the gym, been given a personalized culinary tour of the breakfast buffet by the chef.

I’d glimpsed, I felt, into the future of Phnom Penh, the what’s-coming-next of a city I’d come to love. I’d walked the near-deserted halls where the elite’s heels will soon click, and I’d heard my own soles slip beside them.

I smile and thank the receptionist again, letting the bell boy carry my beat-up bag across the lemongrass-scented lobby.

Tagged
Where to Stay Cambodia
What did you think of this story?
Meh
Good
Awesome

21 Reasons You Should Drop Everything and Move To Phnom Penh

The Coolest Things To Do in Siem Reap Beyond Angkor Wat

In Siem Reap You Get Hit Up by Begging Kids All the Time. Here’s How I Dealt With It

I Got To Study Under a Professional Photojournalist. Here’s What He Taught Me About Honing Your Craft.