A UNESCO WORLD HERITAGE SITE, Río Plátano, on the Mosquito Coast of Honduras, has the highest level of tropical biodiversity in Central America. It is also home to the Pech and Miskito Indians.

Over the last decade, poachers and non-Indians have been invading the reserve from all sides, burning forests to sow pastures, using dynamite to fish, and forcing indigenous inhabitants off their land.

Explorer and mountaineer Robert E. Hyman visited the Río Plátano Biosphere Reserve in Honduras in April 2010. Led by naturalist and former Honduran Special Forces Jorge Salaverri, Hyman became one of fewer than 400 outsiders to have ever completed the journey, which requires a Class V river descent followed by a 12-hour hike through deep mud.

After witnessing firsthand the pressures facing Río Plátano’s indigenous communities, Robert decided to return to film a documentary. I spoke to him earlier this week about what he hoped to accomplish. 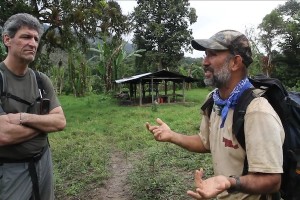 Screenshot from "Paradise in Peril"

“I couldn’t help but want to get involved,” he said. “I’d spent two weeks going through the jungle, seeing evidence of the land being destroyed. You want to help in any way you can.”

When he returned home to DC after the first trip in 2010, Robert spent several months making plans.

“The way I strategize is with a flow chart — put the problem in the middle, with ideas coming out from every direction.” Robert came up with several different ways to help; contacting UNESCO, contacting ambassadors and Honduran officials, using his Washington D.C. connections, and finding writers and photographers to help publicize the issue.

After a bit more brainstorming, he decided the best way to get the word out was a film. “I realized a documentary was critical,” he said. “I started looking for a cinematographer. But I knew how hard this expedition was from experience. You’ve got to get the right person, or you’ve got serious trouble.”

He found 23-year-old Daniel Byers through The Mountain Institute, a non-profit organization. Using a Canon HD camera, Daniel captured about 10 hours of film during the trek. Filming slowed the expedition down slightly, but not as much as one might expect.

“It wasn’t prohibitive,” said Robert. “That 12-hour hike through the mud is the hardest part of the journey – after day two, you either crawl into the fetal position, or you say ‘bring it on.’ I already knew all the spots we’d stop for lunch and camping, so I just took off. Daniel said ‘I want to film you doing this!’ and I said ‘then you’d better catch up!’”

After the expedition, Daniel felt he couldn’t properly tell the story in anything less than 30 minutes. If an organization or production company is interested on a different take or extended version, there’s plenty of footage. “Or we could go back and do something bigger,” Robert adds.

Paradise in Peril from Skyship Films on Vimeo.

To promote the film, Robert set up a Facebook page and is looking into building a website to post a more comprehensive collection of information about the Río Plátano situation. He contacted the UNESCO World Heritage program, and they updated their page on the reserve with information from the expedition. The documentary itself has had over 3,500 views so far.

“The pressure we’ve exerted with this film is responsible for Honduras asking UNESCO to put Río Plátano back on its list of sites in danger,” Robert said. “We’ll take full responsibility for that.” After he gave the organization GPS coordinates, they sent helicopters to scope out the endangered areas and witnessed illegal activity for themselves. Word about the situation has also spread through volunteers of the Peace Corps working in Honduras.

On the other hand, Jorge has received a death threat from a local family involved in illegal activities. “When you make people mad, you know you’ve done something right,” said Robert. He continues to spread the word about “Paradise in Peril,” and is currently working on a Spanish translation of the film to raise more awareness in Honduras.

“The odds may appear to be slim, but they’re zero if you don’t try,” he said. “The more pressure you put on it, the more chances you have to be successful.”

Tagged
Activism Interviews Honduras
What did you think of this story?
Meh
Good
Awesome

I went to Honduras, and here’s why I have to go back ASAP

Book Review: Where Am I Wearing? by Kelsey Timmerman

Honduras By The Numbers

20 reasons to travel to Belize NOW

14 over-water bungalows to dream about at work [PICs]

17 Spanish expressions to know before you go to Honduras