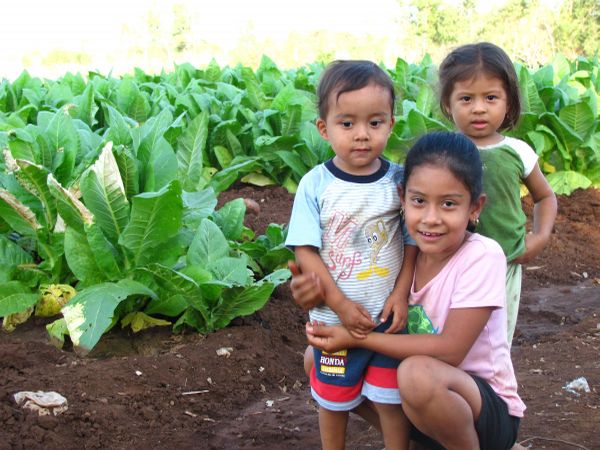 Photos Courtesy of the Author

[Editor’s Note: Megan Kimble was a writer selected to travel with the Green Living Project to document environmental and community sustainability efforts in Guatemala and Belize. This is one of several dispatches she is filing for Matador.]

We arrived to the sweltering Guatemalan coast expecting to see a blazing sunset. Instead, blocking the road to the beach, a blazing horizon of burning corn blocked our view, billows of smoke silhouetted against the darkening sky.

Crop burning is a huge issue in Guatemala, deeply rooted in cultural beliefs that burning the residues that remain after harvesting “clean” the land, wiping it fresh for a new season of planting. What burning really does is concentrate the soil’s nutrients into a light layer of ash that is too often blown away, leaving the soil vulnerable to erosion in heavy rains and windy droughts.

We’re here, on this remote farm in southern Guatemala, with Semilla Nueva, a small non-profit working to help farmers learn and implement sustainable agriculture practices on their farms and in the community.

In communities like this one, where farmers farm as their fathers did, chemical-based agriculture creates a cycle of dependence. Farmers rely on chemical fertilizers and pesticides to keep yields stable. But as the chemicals—and crops—strip the soil of nutrients, farmers must add even more fertilizers to the soil the next season.

Not only do chemical fertilizers erode the soil, more recently they’ve begun to erode the bottom line profits of most farmers. Between 2006 and 2007, the cost of fertilizer in Guatemala rose 300 percent. This price increase combined with an increase in extreme weather—droughts in 2008, floods in 2009—have made it so farming is no longer a profitable enterprise for many campesinos; in fact, they’re losing money.

Semilla Nueva is in Guatemala to introduce farmers to alternative ideas—like crop rotating, green manure, and worm composting. They work with promotores, or community leaders, in seven communities throughout Guatemala. The idea is that by first building a relationship with one farmer, teaching him how he can increase his output and lower his costs, the promotor will teach other farmers in his community, gaining a stake in the development process.

Isaias Alvarado, the first promotor Semilla Nueva worked with on the coast, is the community leader here in La Maquina. “We had a lot of loss [of crops] in past years,” he said. “Our parents taught us to burn the land, and maybe that’s not so good. It’s important to communicate not just here, but with others, in the municipality. I’m proud to share these new technologies with my community, with others.”

Isaias is the head of a bustling house—full of squawking chickens, giggling toddlers, and the quiet slap-slap of tortillas on the stove. Curt Bowen and Darren Yondorf, Semilla Nueva’s Executive and Field Directors, walked into this busy home as if it were their own—a testament to the strength of the relationships they’ve formed here. 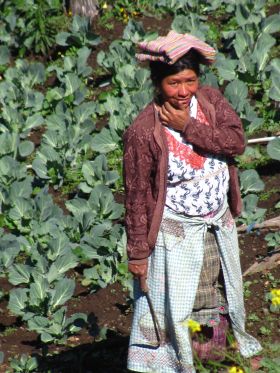 Photo Courtesy of the Author

In the past year, Isaias has tried two new technologies—green manure and conservation tillage. Green manure are cover crops, planted in the off-season when land usually lies fallow. Cover crops not only restore nitrogen, moisture, and bacteria to the soil, they protect top layers from sun and erosion. The green matter can then be tilled back into the soil, fixing even more nutrients before seeds are planted. Though green manure’s primary benefit is building soil health, which ultimately increases yields, this is an objective that’s hard to quantify for poor farmers. What is quantifiable is that these crops can often be sold, like the macuna Curt and Darren helped plant last year, and farmers’ fertilizer needs are reduced, fostering much-needed independence from fluctuating chemical prices.

According to Curt, 60 to 70% of fertilizers used across the world are pure nitrogen. Rather than use fossil fuels to manufacture nitrogen—the most important nutrient for healthy crops—green manure takes the nitrogen from the air and puts it in the soil. “Green manure is the most important technology of organic agriculture,” said Curt. “You have to find a way to get nutrients for your plants, and atmospheric nitrogen is an unlimited resource.”

Similarly, conservation tillage is a simple yet powerful alternative to crop burning. When corn is harvested, rows of stalks line the field; farmers call this residue “dirty,” and burn it. In conservation tillage, or “no-till,” farmers simply cut the corn stalks down, leave them to decompose on the soil, and plant the next season’s crops directly on top of the remains. Not only does this prevent the soil disruption (and release of carbon dioxide) by tilling, it also protects the soil from variable weather.

“Ultimately, Semilla Nueva is planting new seeds (thus, the name) in the soil of Guatemala not only to help the livelihood of the farmers who have become like family to them, but also because they see these small farmers as important links in a worldwide chain.”

Unfortunately, Semilla Nueva is fighting a strong cultural rejection to planting on these cluttered-looking fields. With Isaias as a model, they’ve got to demonstrate that this new technology produces better soil—and more corn—to entice other farmers to try it out.

Ultimately, Semilla Nueva is planting new seeds (thus, the name) in the soil of Guatemala not only to help the livelihood of the farmers who have become like family to them, but also because they see these small farmers as important links in a worldwide chain.

Tagged
Guatemala
What did you think of this story?
Meh
Good
Awesome