We’re a little short on jobs here in Amurica. Not that you need convincing, but here’s the latest report on it from the Bureau of Labor Statistics.

So, what to do? Well, Howard Schultz, the CEO of Starbucks, did some thinking and came up with the following scenario:

It’s no secret that small businesses create the foundation for a strong, stable, and prosperous economy. But because banks are really reluctant to hand out money these days, it’s time to find a new way to jumpstart the core of our job-creating-machine. Here’s how Starbucks plans to make it happen: 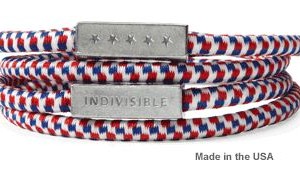 The snazzy new bracelet you'll get for $5.

Starbucks has already pledged $5 million. That means $35 million in real financial investments. And it’s urging other companies to jump on board with the “indivisible” idea as well.

We have grown hopeless to the thought of our government having any answer to the current situation that we’re in, and given that we’re still being forced to sit through debate after debate between candidates for an election that’s over a year away, it’s clear that the people in control aren’t making it a priority to really light a fire under the nation to join together to figure this mess out.

Starbucks’ plan goes around that problem. It also uses a proven method of marketing–viral bracelet advertisement–for a cause that, unlike Livestrong campaigns or other health-related campaigns, is actually one hundred percent a matter of money. Unemployment is curable.