“THIS MOVIE will in no way guilt people into action, or into annoyance and subsequent inaction,” says Schlosberg on her Kickstarter page. “I intend to use these stories to move viewers, and the animated fable to inspire them. No doom, no gloom.” 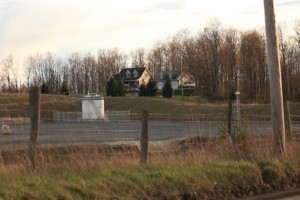 In “Backyard,” Deia visits (among others) a woman in North Dakota whose creek downstream of a frack site has been poisoned, killing her livestock and pets; a local store owner near the Susquehanna River in Pennsylvania who’s under pressure to sell land that’s been in her family for generations; and an ex-oil worker in Colorado investigating the toxic spills he witnessed near a well site.

The stories will be interspersed with an animated fable about a group of birds, some of which can be seen in the preview above.

I contacted Deia to find out what motivated her to start working on this film.

I believe I can make the greatest impact that I’m capable of by using my geology, teaching, art and film backgrounds to share stories from people directly involved in fossil fuel extraction issues with a wider audience.

One main issue that keeps emerging as I talk to more and more people is that nothing really makes people understand the negative consequences of fossil fuel extraction until it’s right in their backyards. Barb, whose voice tells the story featured in the trailer, explained this well. The idea in calling my film “Backyard” is that when talking about atmospheric pollution, water pollution and climate change, individual backyards mean nothing; it is our collective environment that is our “Backyard,” and it has already been experiencing the negative impacts of fossil fuels for many years.”

The Kickstarter campaign for “Backyard” ends July 5th and has a goal of raising $10,000 for production and post-production costs. Schlosberg has won several awards for “Stories of Trust,” a ten-part series on young people working to prevent worsening climate change. She also directed and co-produced “Connecting the Gems,” a film about migration corridors in the Northern Rockies as told from an animal’s point of view, which received an Honorable Mention award at the International Wildlife Film Festival.