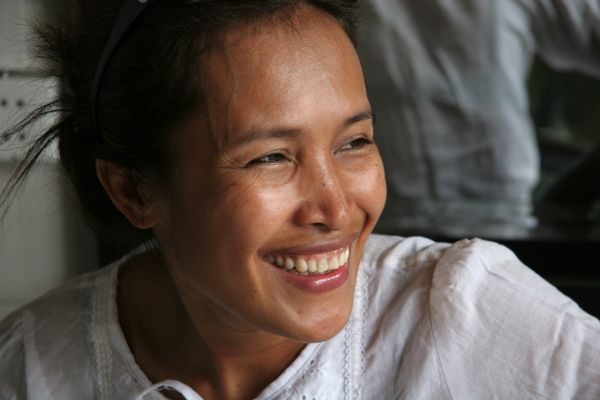 Imagine waking up everyday only to be brutally beaten and raped.

For most of us that idea is a nightmare, but that was reality for a young Somaly Mam. Growing up in extreme poverty in a village in Cambodia then sold into sexual slavery at the age of 12, she saw her friends murdered and very young girls abused. After several years, Mam was lucky enough to escape. Her tenacious spirit and undying will led her to commit the rest of her life towards rescuing and rehabilitating other survivors.

Several years later on the other side of the world, Jared Greenberg and Nicholas Lummp were two college roommates fed up with the lack of action about an illegal industry that was only less profitable than narcotics and weapons. Greenberg and Lummp decided to raise $1 million towards this cause, but had no idea how they were going to do it. They went to the one place that information about virtually anything can be found – the media – and found out about Somaly Mam.   Somehow the email from Greenberg and Lummp was not only read by Mam, but answered by her as well, and within days they were on a plane traveling to Cambodia.

In Cambodia, Greenberg and Lummp met with Mam, toured the shelters she had created, and met some of the survivors. Inspired by a woman Greenberg calls an “incredible leader”, “passionate”, and “positive”, and with Somaly Mam’s vision of creating an organization in the U.S., the Somaly Mam Foundation was born.

By the fall of 2007, the Somaly Mam Foundation was having a launch at the U.N. What started as two college kids and a human trafficking survivor was turning into a non-profit that was really going to make a difference. People and organizations began to back the foundation, and it became obvious that this whole thing was getting too big for Greenberg, Lummp, and Mam to handle alone.

Enter the current executive director, William Livermore, in Spring 2008. Formerly of Lexus Nexus with a specific interest in building legal systems in developing countries, Livermore brought in a corporate skills set that would take the foundation to the next level.

“The tipping point is when communities are involved and when governments are embarrassed.” – William Livermore, Executive Director

When Livermore became involved, his priority was to develop a purpose and focus, which became counseling and empowering survivors to get the skills needed for reintegration into society once they have been rescued from slavery. The Somaly Mam Foundation does this through rescue and recovery, education, and reintegration programs.

The rescue and recovery program gets women and young children out of sexual slavery and into one of AFESIP’s (the organization Mam founded in Cambodia before the Somaly Mam Foundation) safe houses, which provide food, shelter, and medical care. The Somaly Mam Foundation (SMF) then focuses on educating the women. Livermore believes that creating an educated community with sustainable employment will make a significant dent in the human trafficking industry.

Lastly is reintegration. Previously, SMF has previously taught the women skills such as sewing and hair styling, but Livermore has realized that for the long-term success of the organization, there needs to be a compromise between Western market needs and more traditional employment. The SMF is currently planning to launch a micro-financing program in early 2010 that will provide survivors with money to start their lives over and encourage financial independence.

The Somaly Mam Foundation also believes in the importance of creating hundreds, if not thousands, of role models for survivors to look up to through the Voices for Change Initiative. The Voices for Change Initiative empowers survivors who have gone through the recovery, education, and reintegration process to counsel newly rescued victims and be a stand for others’ recovery. 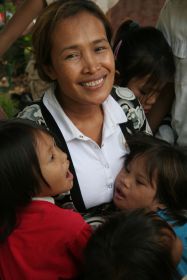 Greenberg and Livermore agree that spreading awareness about the human trafficking industry is the biggest way for people to get involved. For obvious reasons and current restrictions, it is not possible for volunteers to travel to Cambodia and interact with survivors, so both Follow Somaly Mam on Twitter @SomalyMam or the foundation on Facebook.

Sign up at Somaly.org to get ideas for letters/emails to send to your friends, newspaper, and legislature. If you’re a blogger, write about it. Hold your own fundraising event.

SMF recently partnered with the Body Shop and a portion of the sales of every Soft Hands, Kind Heart Hand Cream will benefit the fight against human trafficking. Mam has also written a book about her experiences called The Road of Lost Innocence.

But don’t think that human trafficking only happens “somewhere in Asia” – it happens right under our noses. There have been cases of human trafficking reported in all 50 states in America, and despite the fact that having sex with a minor is illegal is every state, there are still a few that don’t have human trafficking laws.

To get involved with organizations fighting human trafficking within the United States, check out the Polaris Project or Children of the Night.

Learn more about human trafficking in 10 Shocking Facts About Global Slavery in 2008, or about the sex tourism industry in Asia in The Shameful Truth About Sex Tourism.