At the center of Dharavi, one of the largest and most densely populated slums in central Mumbai, Mo’s tiny, dilapidated garment workshop sits atop a decaying three-story shanty. Eight young migrant workers hunch over rolls of fabric upon which they embroider intricate patterns with a fine needle and thread. The floors are concave with the weight of the men, and the ceiling hangs so low one can barely stand. Most of the young men are wearing just a lungi — a piece of fabric draped around the waist — a seemingly necessary adaptation to the oppressive heat and humidity trapped in the confined space.

Having recently left our work in the humanitarian sector to launch a startup, my partner and I spent months in India trying to understand the ins and outs of the garment industry. Along the way, we were introduced to a plethora of ‘factories’ like Mo’s — a litany of unregistered commercial establishments deeply woven into India’s $19 billion garment industry (3% of global sales), producing merchandise largely destined for US and European retailers.

It is estimated that as much as 60% of all garment production in Asia takes place within this framework — a number likely higher in India, where the informal workforce accounts for over 90% of economic activity. This informal garment sector is made up of reservoirs of migratory workers, mostly minorities and members of the Dalit (formerly “untouchable” caste), who flock to urban centers from less developed regions of the country to escape poverty and discrimination. These invisible members of the global assembly line exist in the murky territory of contracted and subcontracted garment orders, in an increasingly competitive buyer-driven industry of fast-fashion.

In an effort to keep up with constant price cutting and short lead times by large retailers, factories employed by the foreign companies will subcontract orders into the informal sector, where workers exist utterly beyond the reach of any labour laws and ethical industry standards. 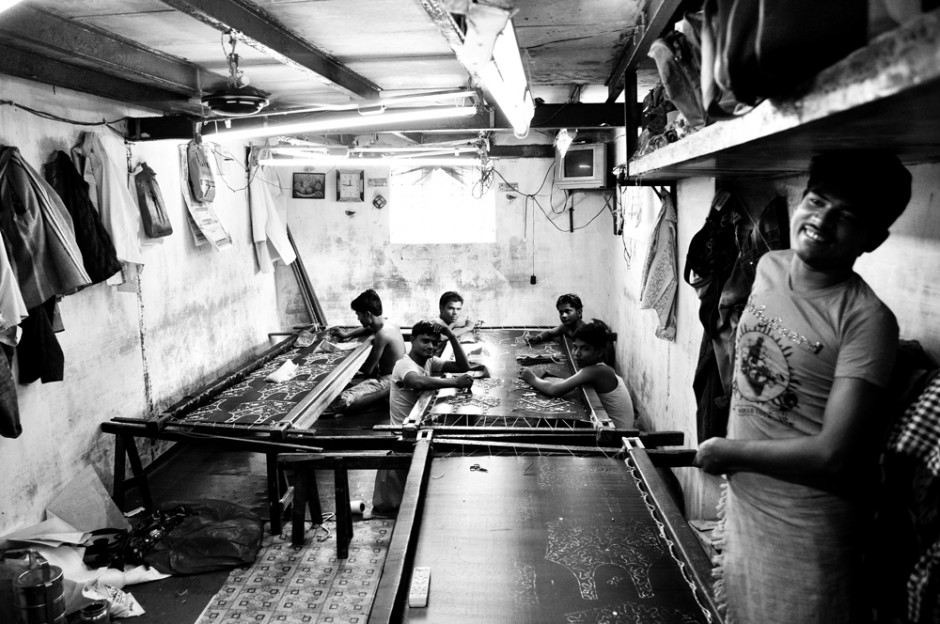 A small embroidery factory setup in a rundown building of Dharavi, Mumbai. By day the space is used as a factory and by night it doubles as a place for workers to sleep.

Teeming with migrants who arrived at unprecedented rates in the ’90s, Dharavi is a makeshift settlement that was never planned with even minimal safety considerations in mind. Sanitation facilities are few, clean water is a luxury, and space is scarce. Over 3,000 small-scale garment factories operate in Dharavi — one million people sharing a square mile.

We make our way through the maze of narrow alleyways no wider than our shoulders. Alongside the footpath lies a long, open drain. It’s stagnant with sewage and gives off a strong odor of excrement that attracts swarms of flies. About 30 meters down the alleyway, we reach a rickety ladder and carefully climb three levels to the tiny loft-like space of the crumbling shanty that houses Mo’s workshop. 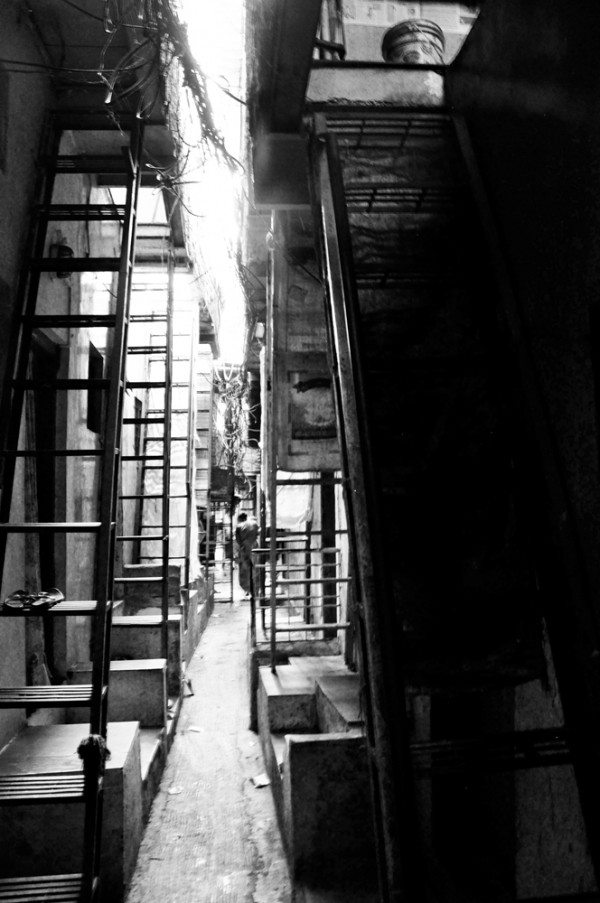 Narrow alleyways of Dharavi, Mumbai, leading up to small residences and commercial enterprises/workshops.

Mo, who looks to be no more than 19 years old, greets us from behind one of the stands where he’s been resting and indicates that we should kneel down to avoid having our heads knocked by the shaky ceiling fan. He explains that his factory fills orders from contractors who farm out garment production to small workshops in and around Dharavi. His unit is only responsible for embroidery work — another unit at the other end of the slum does stitching, and yet another somewhere else is responsible for trimmings.

He doesn’t know where his orders go. There can be up to four levels of contractors between an operation like his and the retailer.

Mo and his brother started this embroidery workshop 10 years back after arriving in Dharavi as migrants from Bihar, an impoverished region in northeastern India. They worked in a similar garment factory themselves before making the necessary connections to establish one of their own.

While entrepreneurs like Mo have benefited from the economic opportunities the informal garment sector has presented them, many more remain exploited for scant pay and continue to be subjected to harrowing working conditions.

“They work hard so that they can send money back to their families,” Mo explains.

His workers are also young migrants from rural regions of Bihar, sent by their families to find work in bustling Mumbai. We aren’t allowed to speak to the workers directly, but Mo explains that he pays them a sum of money in advance — a bond or debt — and in return they work 13 hours a day, seven days a week, to pay back their initial “loan” by producing embroidered work on fabric, on a per-piece basis. Mo doesn’t explain how he manages to get his workers to stay, but we know that false promises and threat of violence are often employed to compel their labour.

All the workers, including Mo, work in the factory by day and use the floor space at night for sleeping. Like many others in the industry, many of these garment workers will lose their vision and the mobility of their hands due to the fine detailing demanded of them. Oftentimes, further loans will have to be taken out to cover medical costs, fueling the cycle of financial bondage. None of the workers have social security, health provisions, sick days, or vacation. 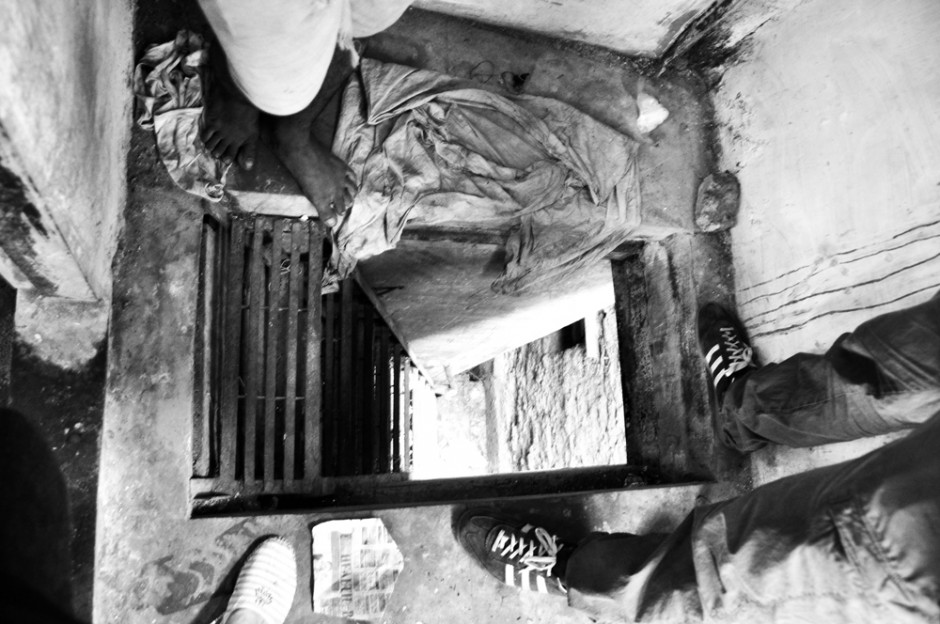 The only exit from one of the garment workshops in Dharavi, Mumbai.

Despite regulations established to assure workers minimal health and safety standards in the workplace (including the ILO Declaration on Fundamental Principles and Rights at Work, and Convention 155), the informal sector in India is in practice left virtually ungoverned by labour and human rights law. This is often because these workshops operate outside the formal reach of the authorities, the law is not implemented in practice, or compliance is discouraged because it is inappropriate, burdensome, or costly.

A few measures have been taken by the Indian government to address issues specific to the informal sector, though. In 2008, the Unorganized Sector Workers’ Social Security Bill was passed, covering informal workers’ life, disability, health, and old-age insurance. Yet, the effective application and implementation of its limited provisions remains a major challenge, with few workers benefiting from them.

As a result, civil society has taken on a key role in addressing growing discontent. NGOs, labour unions, welfare boards, and cooperatives representing the informal sector actively work to provide the necessary organization and support for its members. SEWA, a labour union, has managed to achieve results through advocacy, mediation, and grassroots activities, such as the pooling of resources, provision of low-cost infrastructure, raw materials, training, and advanced payments, and linking communities to markets for sustainable growth. The success of these organizations is rooted in a dedication to using trade as a vehicle to empower those they represent, rather than being solely driven by the bottom line.

The role of businesses 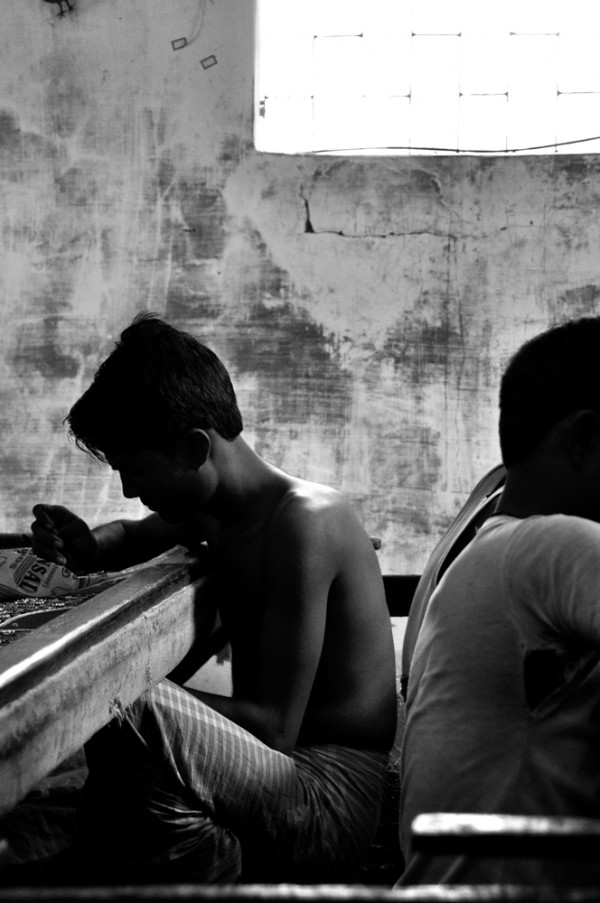 Young migrant from the Bihar region of India works as a bonded labourer in a Dharavi embroidery factory. He works 13-hour days, seven days a week for just over $2/day.

Under UN Guiding Principles, businesses of any size and operating in any region have an obligation to act responsibly and with respect for human rights, even in the absence of state protections. These principles demand proper due-diligence to identify, prevent, mitigate, and account for how they address and impact human rights.

Businesses must remain aware and accountable for their entire value chain. Long-term, stable, and fair relationships must be created with suppliers, and support needs to be given to ensure they are held to commitments to produce goods within a framework of ethical standards and norms.

If members of the informal sector are being included in manufacturing activities, they too should be included in policies and programs to ensure that their circumstances are not compromised, and that their lives are not placed at risk. This includes working with civil society, labour unions, and governments to find solutions.

What can consumers do?

Supporting campaigns like that of Avaaz, which call for corporate accountability in the aftermath of the collapse of the garment factory in Bangladesh, is a very good start. To date, dozens of brands whose clothes were found in the rubble have signed on to a joint safety plan for Bangladesh that will help to improve the conditions for many factory workers in the region. But this only skims the surface of the abuse plaguing a trillion-dollar global industry.

We must demand more transparency from the value chains of global brands to ensure the millions of workers who are not afforded safeguards against abuse are respected.

It’s as simple as asking. Call, email, or write to corporate head offices to ask them for a list of manufacturers (to date, H&M is the only fashion retailer that has released a list), along with their policies and practices that safeguard workers. The more times a brand hears the same request, the more likely they are to take it seriously.

Most importantly, as a driving force behind business, we as consumers must place as much importance on the process and the story behind the products we buy as we do the end result. If we take the time to seek out brands that are making an effort to be transparent and accountable for their actions, there’s hope that the industry will be compelled to follow suit.

As we leave Mo’s workshop, carefully descending the rickety ladder into the thick of the slum, the real weight of it all sets in. I look down at my own clothing and realize — we just don’t know. We really can’t be certain that our seemingly innocuous choices aren’t driving exploitation and abuse in places like Dharavi. Money and products have changed hands too many times, traceability lost and all accountability skirted.

Until we all start doing things a bit differently, there remains the possibility that these compromised clothes will end up on our bedroom floors, our bags of weekend shopping, and the disposable fashions we have become all too comfortable with.

Tagged
Fashion Mumbai, India
What did you think of this story?
Meh
Good
Awesome

11 Signs You Were Born and Raised in Mumbai