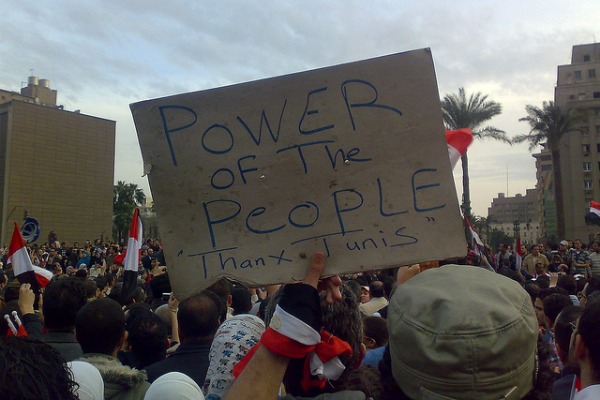 With all the talk of military juntas, Nick Rowlands reckons people are starting to forget a crucial detail of the Egyptian uprising.

On February 11th 2011, Hosni Mubarak stepped down as fourth President of Egypt, leaving the armed forces council in charge of the affairs of state.

Hundreds of miles away in a cafe in Brixton, London, I burst into tears. They’d done it! Mubarak had pharaoh’d over the Egyptian people for 30 years, yet they ousted him in less than three weeks of protests.

I wasn’t the only one struggling to control my emotions. The couple across from me, also following events on their laptop, started cheering. A kind young woman insisted on giving me a big hug.
“But mummy,” one of her daughters cried, “you can’t cuddle that man, you don’t know him!”
“It’s alright, honey,” she replied, “it’s Brixton. We all hug each other here.” I wiped my eyes, and cry-smiled some more.

Now it’s five days later, and I feel like I’m coming down off a particularly trippy pill. Waves of euphoria crashing against the hard shores of reality; the serotonin of revolution spent. Flat. Shades of grey. Wondering what was true, what really happened; turning and twisting and turning jigsaw-like fragments of insight, watching as their magic fades.

The Supreme Council of the Armed Forces of Egypt had started out so well. Saluting the martyrs, promising transition to a civilian government freely and fairly elected, dissolving parliament and suspending the constitution. 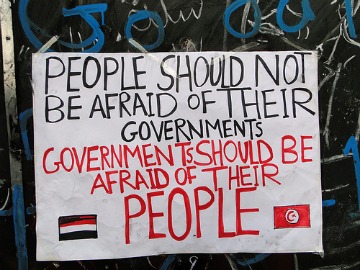 But now there are worries the army has hijacked the revolution. That it was, after all, a military coup. That the hard-nosed analysts – not swept away by the elation of achieving the impossible – were right all along, and there’s no way the army will really hand over any power to the people.

The curfew (though largely ignored) remains, and the hated emergency law is still in place. There are ongoing demonstrations and workers’ strikes, and many political prisoners have not been released, or remain unaccounted for.

Although a coalition of human rights organisations has put forward a plan for transition, Egypt’s opposition groups are fragmented and do not speak with one unified voice. That the uprising was “leaderless” now seems more of a weakness than a strength.

The army has essentially told the people to shut up and go back to work, and to trust that it will see Egyptians right. So far there doesn’t seem to be much progress, beyond the unilateral appointment of a liberal Islamist judge to head a panel charged with amending (not tearing up and starting from scratch) the constitution.

And to paraphrase that renowned wordsmith, Donald Rumsfeld, there’s a whole lot of shit we don’t know, some of which we don’t even know we don’t know. Questions remain not just about the army and the remnants of the old regime, and how easy it will be to build rival political institutions, but also about the behind-the-scenes influence of numerous regional and international vested interests.

And yet, there’s a sense of smugness and self-righteous cynicism to some of the coverage, as if commentators couldn’t wait to go out and learn the Arabic for, “Sorry to piss on your bonfire, but….” Lest we forget, Mubarak has gone. Let me repeat that: Muhammad Hosni Sayyid Mubarak – brutal dictator of Egypt for 30 years – is no longer president. That is massive. 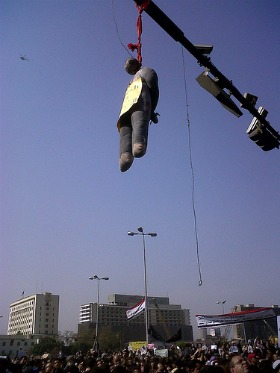 Mubarak is gone. Because millions of ordinary Egyptians said khalaas, enough is enough. People of all ages and from all walks of life stood up to be counted, put their lives on the line to face down a police state no-one believed could be defied. And they won. Peacefully, and with a sense of solidarity and self-organization that was both inspiring and humbling to observe.

To say that nothing has really changed, because the military is still in power, misses the point. Change won’t come quickly or easily – the country is still beset by economic and demographic problems, and a culture of repression cannot be dismantled overnight – but no matter what transpires over the coming months, the barrier of fear has been broken. Democracy, freedom, human rights, hope for the future… these are concepts that have shifted realm from the “Not possible in my lifetime” to the “We are fighting for these now.” It will be interesting to see what happens at the mass rally planned for Friday 18th, the “March of Victory.”

Mubarak, president of Egypt, has gone. To understand how significant this is to the wider Arab world, read this wonderful post on The Black Iris.

And it’s spreading. Check out what’s happening in Iran, Bahrain, the Yemen, and Libya. Protests in Algeria forced the government to promise to scrap emergency law. King Abdullah II of Jordan sacked his government. There were small protests in Syria, and protests are planned for Morocco. There is talk Saudi Arabia might be more vulnerable than it looks.

Even if politics is “The Great Game”, it’s not a game of dominoes. I doubt a whole slew of autocratic regimes are suddenly going to collapse. But such wide scale protests are unlikely to just fizzle out and go away. No doubt much will depend on how events pan out in Tunisia and Egypt, as well as on wider geopolitical considerations, and the intersection between international media and public opinion.

When Mohamed Bouazizi set himself alight in Sidi Bouzid on December 17th 2010, he let the genie out the bottle. Hopefully, it won’t be so easy to force back in.

How do you think events will play out in Egypt and across the rest of North Africa and the Middle East?
For great one-stop-shop coverage of what’s going on in the region, follow the Guardian News Blog, The Arabist blog, and Global Voices online.
And for more on Egypt from Matador, check out our Egypt focus page.

Tagged
News Egypt
What did you think of this story?
Meh
Good
Awesome