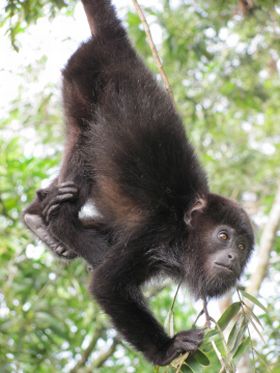 Photos by the author

[Editor’s Note: Megan Kimble was a writer selected to travel with the Green Living Project to document environmental and community sustainability efforts in Guatemala and Belize. This is the first of several dispatches she is filing for Matador.]

We wait by the river. Soon, the guttural cough-bark of the black howler monkeys roars from the north, warning their approach. The cry is big and bad – if I were one of the first explorers of this forest, I’d steer clear. But, within a minute, the troop of monkeys we’ve been following swings through the forest canopy and lands in a draping palm. Their inquisitive faces peek out from behind branches, where they sit quietly, watching us curiously.

Our tour guide, Robert Pantin, starts hooting at them, imitating their bark, trying to fire them up for the benefit of our video cameras. They clamber up branches, sticky paws clinging to the slippery palm fronds, but remain quiet—the intimidating howls are territorial announcements, and now that they’ve arrived, they focus on picking out shoots and gnawing on leaves.

Robert leads tours for the Community Baboon Sanctuary, a community-initiated and managed conservation project. Black Howler Monkeys—or “baboons” in the local Creole—are found only in Mexico, Guatemala, and Belize, and as more and more forests are destroyed, their range decreases. In 1985, the monkey population in the Belize River Valley had dipped to fewer than 800.

With the help of two foreign scientists and a local conservationist, Falley Young, 12 local landowners voluntarily signed pledges to preserve parts of their land as habitat for the Black Howler Monkey and other wildlife. Today, more than 200 landowners in seven villages have voluntarily committed to preserve forested land along the river and in key habitat corridors along and within property boundaries, and the sanctuary spreads over 20 square miles.

Community Baboon Sanctuary was the first organization in the world of its kind—a voluntary cooperative designed to protect the habitat of the Black Howler Monkey while promoting the economic development of the participating communities. A recent census estimated the monkey population has hit 6,000—with a total population of 4,000 people in the seven villages combined, the valley can now say it has more monkeys than people.

Seven miles down the road from Rancho Dolores and the Spanish Creek Wildlife Sanctuary, Robert is the cousin of tour guide Raymond Rebeau. Like Raymond, he also used to prowl these forests as a hunter. “I used to use my gun to make a living,” he said, rattling off a list of 20 animals he sought. But, he realized, “if you can show a white tail deer to a new group of people every day, you have a living—you can do it for a lifetime, and so can anyone else. You can only kill it once.”

Though the preservation of howler monkey populations has been impressive, in this poverty-stricken area of northern Belize, the sanctuary’s most notable feature is its focus on integrating wildlife conservation with human development. “If we are going to be successful, we have to draw a link between wildlife conservation and people’s livelihoods,” said Dr. Conway Young, the son of founder Falley Young. “It’s about more than the monkeys.”

“In fact, CBS is controlled and managed entirely by women through the Community Baboon Sanctuary Women’s Conservation Group…. The group took over in 1998 when “the men weren’t getting it done.”

Tourism is the most direct way locals benefit from the sanctuary, but they do so in many ways. Some make arts and crafts, some host guests in their homes, and some work as tour guides, or taxi drivers. There are no restaurants in any of the seven towns, so a group of women started a catering service for visitors.

In fact, CBS is controlled and managed entirely by women through the Community Baboon Sanctuary Women’s Conservation Group. “When a woman can do it, a woman get it done,” said Ms. Dorla, one of the seven women, one from each community, who lead the group. The group took over in 1998 when “the men weren’t getting it done.”

Last year, Ms. Dorla applied for funding through CBS and received a grant to build a cohune oil processing plant—the only one of its capacity in Belize. The income generated from cohune oil provides yet another incentive to preserve the forests: the golf-ball sized cohune nuts are collected after they drop from the trees.

Ventures like this are why, even as they struggle to pay their bills, these sustenance farmers have been willing to give up parcels of their land for something so abstract as habitat preservation. As former hunter, current tour guide, Robert Pantin said: “You can make more money looking at da wildlife than killing it.”

At Community Baboon Sanctuary, you can stay with a local family in any of the seven villages, through the Women’s Bed and Breakfast network. The cabanas in the Nature Resort are adjacent to the Sanctuary’s museum in Bermuda Landing; check-in with Diana Ruiz to see how you can volunteer or get involved.

Tagged
Activism Belize
What did you think of this story?
Meh
Good
Awesome

A big e-bike tax credit may make bicycle travel a lot cheaper, and easier
The optimal road trip to see all the US national parks, mapped
21 drinking games you can play in any bar
Mexico is raffling off one of El Chapo’s safe houses for $12.50
30 awesome Japanese idioms we should start using in English

A guidebook author’s top 10 for Belize

A quick guide to speaking Kriol in Belize

How to become a good caver

Photo essay: How to make a Garifuna drum

4 caves to check out in Cayo, Belize

What it takes to be a travel guidebook author: Conversation with Lily Girma

The 22 craziest party hostels around the world