There’s a reason nobody plans a trip to the world’s greatest waste disposal sites.

Well, nobody but Jeremy Irons. In his new documentary film Trashed, the British Academy Award winning actor travels around the globe to explore the shadow side of human longing and ambition, manifest in our ever-growing appetite for material consumption. Trying to find out what happens to the 58 billion disposable cups, billions of plastic bags, 200 billion liters of water bottles, billions of tons of household waste, toxic waste, and e-waste we throw away each year, Irons’ journey takes him from European incinerators belching invisible clouds of dioxin to the Chinese countryside littered with toxic debris. If there were a Frommers Travel Guide to the Hidden Monuments of Human Shortsightedness, Trashed would be the movie companion.

It’s fitting that the film starts in the one place not within earshot of a garbage dump — outer space — as if to remind us that digging big holes in the ground and filling them up with junk probably wasn’t what God had in mind when she equipped us with big brains and self-awareness. As the camera begins to zoom in on a Mediterranean beach near the ancient Lebanese city of Sidon, where Irons is standing on an immense mountain of refuse, his baritone, slightly wistful narrator voice invites us to a closeup of planet Earth with a sullen, “It’s only when we look more closely that we start to see the results of our consumption.” Wading through the cocktail of medical waste, household trash, rubber tires, and toxic fluids that cling like an otherworldly fungus to what once must have been a cliff where lovers met, the only word Irons manages to draw from his lips is a crestfallen “appalling.”

The issue of garbage is not new to human civilization. As far back as 3,500 years ago in ancient Mesopotamia, people in the city of Babylon are said to have engaged in the practice of throwing their trash out the front door and covering it with an occasional layer of clay, which then forced them to build steps down to their front door from streets raised by the trash they buried. In principle, this same method is still used in modern landfills around the world, where raw garbage gets compacted, then covered with temporary blankets of soil, chipped wood, or sprayed-on foam products. The only difference — besides the sheer volume of trash produced worldwide nowadays — is that these modern-day waste pits are often located far from the urban populations they serve, the refuse hauled in by fleets of garbage trucks. 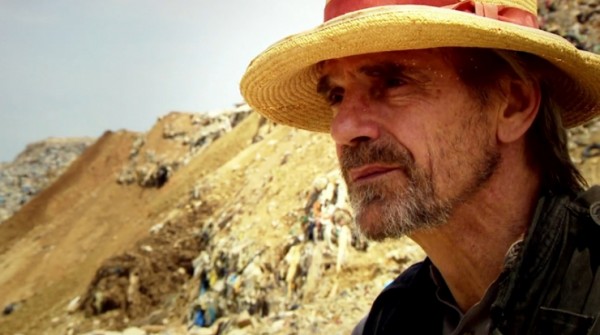 The ingenuity with which technologically advanced Western societies have attempted to get their over-consumption out of sight is on full display in Europe, where Irons visits French and British communities living near state-of-the-art trash-burning ovens (aka incinerators). Their smokestacks don’t belch out plumes of black smoke; instead they emit invisible nano particles of dioxin, the most toxic chemical there is. Irons points out that dioxins were used in the US military’s Agent Orange sprayings during the Vietnam War, the effects of which are on display in a particularly harrowing leg of his journey to the birth defect room at the OB/GYN Hospital in Ho Chi Minh City.

Just as the deformed children in Vietnam have no recourse against their perpetrators, the communities near the incinerators whose farms and animals have been devastated by their countries’ garbage trail have their court cases dismissed because the burden of proof is too high with a poison that is too small to see and monitor. While torching raw garbage into tiny particles to eschew liability may seem like the perfect micro-engineering solution from a corporate industrial perspective, it’s just another ill-fated, albeit sophisticated attempt to create the illusion of effectively dealing with garbage. Out of sight and out of mind, yes, but not out of atmosphere, ecosystem, and body.

In a way, the most affected places Irons visits are also the most honest reflections of our impact, thus presenting the biggest opportunities for self-awareness, and ultimately, redemption. In cities in developing countries like Jakarta with no organized rubbish collection and where poor residents are forced to boil and drink the water from the plastic lava also known as the Ciliwung River (“Turbid water”); on a heavily littered California beach where 2.7 million kilos of trash is cleared from beaches every day — a large chunk of it consisting of cigarette butts whose toxic filters leach into the water. To see it is to want to do something about it.

The best example, perhaps, of how uncovering our dirty secret can lead to change is the 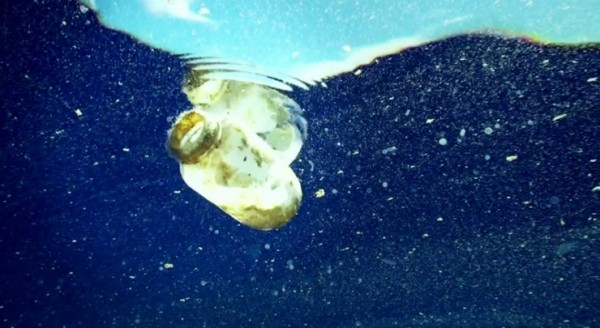 “Only we humans make waste that nature can’t digest,” says Captain Moore as he takes Irons on a tour of the ocean in his aluminum-hulled research vessel, Alguita. He explains how the chemical sludge is ingested by the smallest organisms and travels up the food chain — by way of biomagnification — into the systems of killer whales, which is now the most polluted species on Earth and qualifies as toxic waste. Moore tells Irons that whales are having a hard time reproducing and that in a few generations humans won’t be able to either, a thought that sounds more reassuring than worrisome, considering we’re the only species that trashes its own nest.

And yet, it wouldn’t be human if there weren’t any hope. In fact, the solutions are not as complicated as we might think, and the last leg of Irons’ travels gives a glimpse into what a world without waste might look like. A visit to San Francisco shows a city that has come 80% of the way toward its stated goal of zero waste by 2020. Through an ambitious and creative collaboration between a city bold enough to be the first to enact a plastic bag ban (sparking a wave of plastic bag bans in cities around the world) and pass a mandatory recycling and composting ordinance, a worker-owned waste management company that calls itself a resource recovery company (Recology), and an engaged citizenry, San Franciscans show what’s possible when a majority of stakeholders agree to clean up their act.

How could one American city be converting 80% of what would otherwise end up in dumps, gutters, and the ocean into valuable new resources while the rest of that nation is hovering around 35%? Irons quickly finds out from the city’s zero waste coordinator Jack Macy that San Francisco’s success is the result of political will, good organization, smart technology, down-to-earth collaboration, and a commitment to education. In other words, it could be done anywhere, and without miracles.

At the city’s state-of-the-art recycling facility he watches spinning disks, magnets, and employee-owners pick everything from egg cartons and coffee cup lids to tin cans and plastic bottles from a series of conveyer belts, a centralized separation process that allows residents to toss everything that’s recyclable into a single blue bin. About 750 tons of “waste” fills 30 large containers six days a week, and the high-quality materials get shipped around the world to be re-manufactured. At his next stop, the city’s transfer station, Irons is introduced to Recology’s unique Artist in Residence Program that grants local artists full scavenging privileges to re-purpose discarded materials and turn trash into art. The manager of the program, Deborah Munk, also runs the Environmental Learning Center that offers tours of the public disposal and recycling areas and a behind-the-scenes look into the architecture of zero waste. 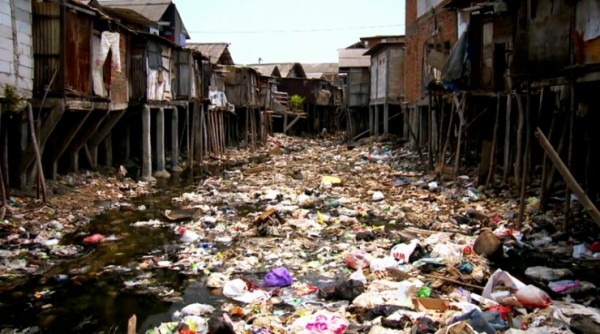 A hundred kilometers north in California’s wine country, Chateau Montelena vineyard manager Dave Vella raves about the health of his crops ever since he started applying compost — made from San Francisco residents’ food scraps placed in green bins — to his grapes and cover crops. Agronomist Bob Shaffer, who helps to connect farmers with the city’s high-nutrient compost, explains to Irons how composting the 1.3 billion tons of food that’s thrown away each year could not only significantly reduce landfill size and methane emissions, but help restore soils, bring healthier food to people, and even sequester significant amounts of CO2 from the atmosphere. The silver bullet to fix our trash, food, and climate crisis is literally left to rot in the trash bins, garbage disposals, and landfills of the world.

In the age of growing climate change awareness, it has become somewhat fashionable among environmentalists to belittle the global garbage crisis as nothing more than a boutique problem dwarfed by the much larger threat of rising sea levels, super freak storms, and devastating wildfires. However, as Monica Wilson of the Global Alliance for Incinerator Alternatives pointed out during a pre-screening panel of Trashed, the disposable culture we have allowed to thrive in the last half century or so is intrinsically linked to the rise in greenhouse gases, and zero waste is a key component in addressing climate change.

Consider: A rotary phone may have lasted generations among a family, but today the average lifespan of a smartphone in the United States is 21 months, and two billion of them — with carbon footprints from manufacturing, packaging, shipping, usage, and disposal — are expected to be in use worldwide by 2015. A set of ceramic dishes may have been passed down to children and grandchildren less than 50 years ago, but today Americans throw away 40 billion plastic knives, forks, and spoons each year, and 10% of the oil in the world is burned to make and transport these disposable plastics.

Before supersized happy meals and subsidized GMO corn, food scraps may have landed in backyard composts, but today 28 billion pounds of food (or 25% of the American food supply) never makes it to the dinner table — growing, transporting, and selling all the food that will be thrown away uses more energy than is currently produced by offshore oil drilling.

“You cannot have infinite growth against finite resources,” Irons notes at one point in the movie, a statement I could well imagine serving as a tagline for Trashed – The Sequel. What the piles, soups, puddles, and clouds of garbage covering our beautiful home planet seem to tell us is that we have to change how we view the material world, from something to be used and discarded to an interdependent organism we’re part of and in which everything has value and meaning.

Better resource recovery is only one part of a solution, but it really starts at the beginning of the product cycle. During the panel discussion, Heidi Sanborn of the California Product Stewardship Council stressed the importance of urging manufacturers to think in Cradle to Cradle terms in their product design process and to commit to extended producer responsibility, wherein environmental costs associated with goods throughout their life cycles are integrated into the market price of the products. 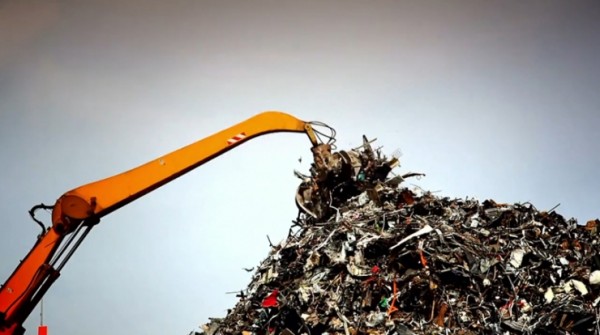 Ultimately, it is up to all of us to make the change we wish to see. We have to ask for sustainably designed products from manufacturers and buy from companies that have recycling programs for their wares. We have to engage politically, like Italian elementary school teacher and 2013 Goldman Environmental Prize winner Rossano Ercolini, whose grassroots campaign has prevented 40 proposed incinerators from being built and who has led his home town of Capannori to become the first Italian municipality to adopt a zero waste goal for 2020.

Most importantly, perhaps, we’d be well advised to rethink our own values and behaviors, like Beth Terry, a California accountant who committed to stop buying new plastic and educate others on how to live a plastic-free life after she saw the photo of a plastic-filled sea bird carcass, and ask ourselves what are the things we really need to live happy and fulfilling lives. Because, as Jeremy Irons responds to the question of why he doesn’t throw his cherished old jacket out, “it may be cheaper to buy a new one, but is it better to buy a new one?”