Working women of the world, don’t expect to earn as much as men in your lifetime.

Snail-like progress in closing the gender pay gap means it will probably take another 118 years before women enjoy the same income as men for similar work, the World Economic Forum said in its latest Global Gender Gap report.

That will be the year 2133, which is around the time your great-great-granddaughters will be entering the workforce and long after you have clocked off for good.

The average woman now earns $11,000 a year — what the average man was making back in 2006, according to the report, which ranks 145 countries according to gender parity in health, education, economic opportunities and politics.

“In economic terms, the gap has closed by only 3% (in the past 10 years) with progress towards wage equality and labor force parity stalling markedly since 2009/2010,” the report said.

Most women probably didn’t need the WEF to tell them that.

Bad news ladies. Women earn about two-thirds of what men make. And it's getting worse https://t.co/3BQXivNQov @wef pic.twitter.com/jUUbmDJA6H

But a few countries are getting close to equal pay for equal work.

Rwanda was ranked No. 1 for wage equality by the WEF, with a score of 0.88 out of 1.00 (1.00 being parity). Rwanda is also one of just four countries on the planet where there’s a higher proportion of women than men in the workforce. The other countries are Malawi, Mozambique and Burundi.

Norway was second on the wage equality ranking and Zambia was third.

The United States was a distant 74th. American women can console themselves that they are doing better than their counterparts in 71 countries, including Bangladesh and Pakistan.

Women are now earning what men did a decade ago, @wef says: https://t.co/U3NIdBH7iJ #gendergap pic.twitter.com/r1VJzr8PTu

The overall picture for the global gender gap shows women enjoy greater equality in Iceland, Norway, Finland and Sweden than anywhere else in the world. Ireland was fifth, making it the highest ranked non-Nordic country, followed by Rwanda and the Philippines. 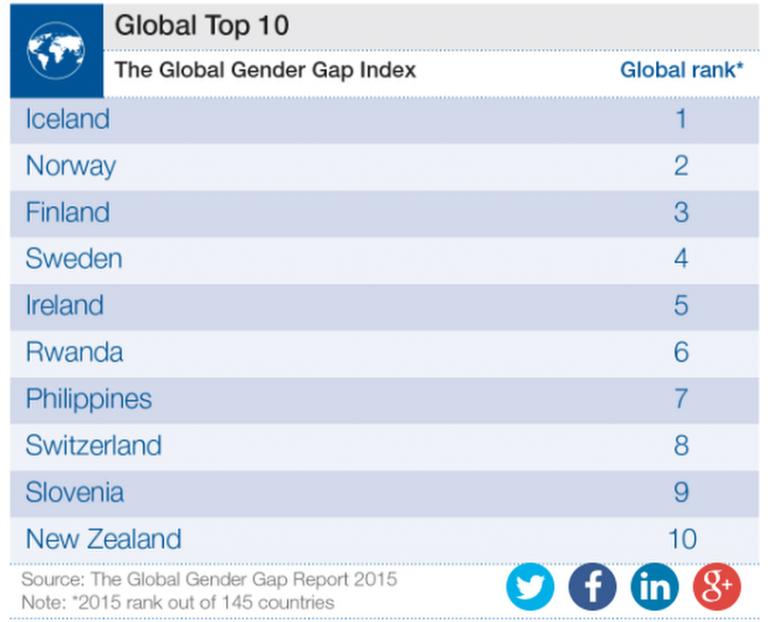 Most countries have made progress in improving access to primary, secondary and postsecondary education, the report found. The overall gender gap in educational attainment is 95 percent — up from 92 percent in 2006 and 5 percent short of parity — and 25 countries have closed the gap entirely, including the Philippines, Latvia and Nicaragua.

The United States was not one of them.

But higher levels of education aren’t being reflected in the workplace. While women outnumber men at universities in nearly 100 countries and make up the majority of skilled workers in 68 countries, they dominate business and political leadership positions in only four.

When it comes to political empowerment, which measures the number of female politicians, ministers and heads of state in a country, the United States also rates poorly, ranked 72nd out of 145 countries. Iceland and Finland ranked first and second, having closed more than 60 percent of the gender gap.

The really good news, though, is that 40 countries have achieved parity on health and survival for men and women — five more than last year — and not a single country has a gender gap bigger than 90 percent.

There’s hope yet for equality.

By Allison Jackson, GlobalPost
This article is syndicated from GlobalPost.