THIS WEEK, THE WORLD HEALTH ORGANIZATION announced that they would not recommend the cancellation or postponement of the 2016 Summer Olympic Games in Brazil as a result of the Zika virus. Then the Center for Disease Control announced that 6 women who had been infected with the virus in the US had pregnancies with birth defects. This might sound scary to some Americans who, thanks to the saturation news coverage of the virus, have visions of a 28 Days Later-like virus spreading all over the world thanks to a global event held in the epicenter of the pandemic.

This, as it turns out, is a little overblown. Things are nowhere near that dire. But there will likely be reports of cases of Zika in the United States over the next few months, and some travelers may start to question their plans in and outside of the country. These are the basics of what you need to know.

Who has to worry

Overall, Zika is a relatively mild mosquito-borne infection. Unlike diseases like Malaria, Zika is generally not lethal. It can cause fever, rashes, joint pain, and red eyes, but it is, for the most part, not particularly harmful to adults. Because of its relative harmlessness, scientists have not studied Zika that intensively in the past. Until the current outbreak, in which the connection between Zika and birth defects were discovered, the scientists had larger priorities. So we don’t know a ton about the disease, which is why the current outbreak is so scary. What we do know is this: it’s only really harmful to unborn babies.

The issue with Zika is that if a pregnant woman gets it, she can transmit it to her unborn child, which can cause microcephaly, a type of birth defect that gives the child a smaller head and, in many cases, developmental problems in the brain.

As such, it’s only women who are pregnant or who are trying to get pregnant who need to worry about Zika. There’s a little wrinkle in this as well: Zika seems to survive longer in semen, and it can be sexually transmitted from male to female. As such, if you are a man who is planning on having kids who gets infected with Zika, you should abstain from having unprotected sex for six months. If you are a man who has traveled to a place with a Zika outbreak but haven’t shown symptoms, you should wait eight weeks before getting a woman pregnant.

If you are not pregnant and are not trying to get pregnant, you do not have to worry. But if you are a sexually active woman of child-bearing age, then you should probably make sure you’re on a strict birth control regimen, and if you’re a sexually active guy living in an area with Zika, you should wear a condom. Nearly half of pregnancies are unplanned, so it’s worth taking precautions.

Will the Olympics cause a further outbreak?

Probably not. The WHO isn’t hugely concerned because, while Brazil is the epicenter of the current Zika outbreak, it will also be in the middle of its winter season during the 2016 Summer Olympics, as it’s on the other side of the equator (for the most part). As such, there will be fewer mosquitoes. On top of this, the Brazilian government, the WHO, and the International Olympic Committee have taken steps to ramp up mosquito control measures.

All that said, if you are a pregnant woman, you should probably not go to the Rio Olympics, or anywhere with a serious outbreak. If you live in a place with an outbreak, take precautions — like wearing long sleeves, putting on proper bug spray, and using window screens and air conditioners rather than open windows to keep your house cool.

Will it come to the US?

There are already a number of Zika cases that have been reported in the continental US, but there has not been a single case of Zika that has originated in the US. Every case so far has stemmed from someone getting Zika while traveling, or of the disease being transmitted sexually.

The main problem is that the United States is home to the Aedes aegypti mosquito, which is the mosquito that transmits Zika. More recently, the CDC has found that another mosquito the Aedes albopictus, is also capable of carrying the virus. This is their largest potential range:

The CDC writes, “These maps include areas where mosquitoes are or have been previously found. Maps are not meant to represent risk for spread of disease. Aedes aegypti mosquitoes are more likely to spread viruses like Zika, dengue, chikungunya and other viruses than other types of mosquitoes such as Aedes albopictus mosquitoes.”

As such, they are focusing their resources on areas that have reported findings of Aedes aegypti mosquitoes, which they’ve noted on this map: 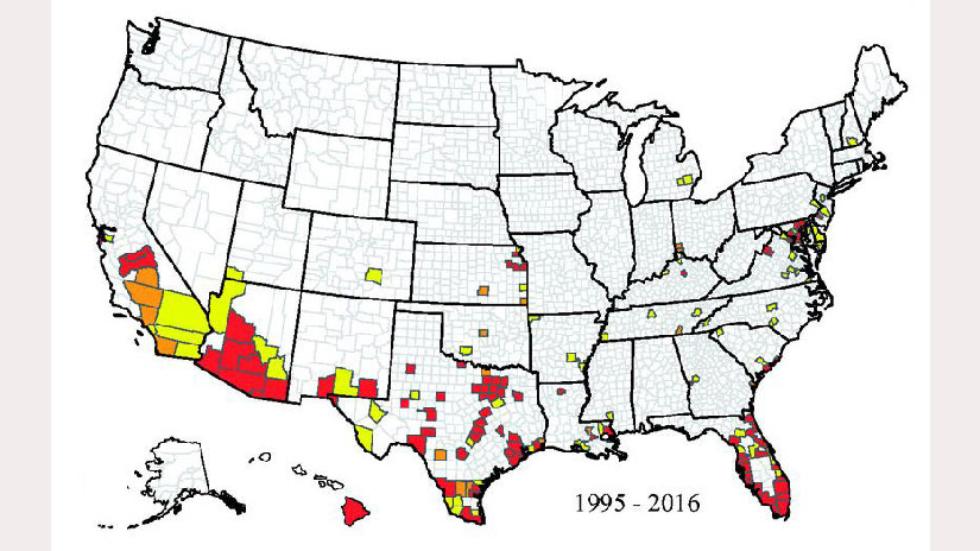 Red denotes findings of Aedes aegypti mosquitoes in at least three years during this time frame. Orange is two years, and yellow is a single year. White means they weren’t found in any of those years. Map: The Center for Disease Control

There have been locally originating outbreaks in Puerto Rico, the US Virgin Islands, and American Samoa, however, and these places are likely going to be the sources of a lot of travel-oriented cases of Zika.

But these are places with less screens and air conditioning, with less public health measures in place, and also with a much higher concentration of mosquitoes. In an interview with Reuters, Anthony Fauci, director of the National Institute of Allergy and Infectious Diseases, said that he “expected to see someone bitten by a mosquito [in the U.S.] contract Zika but did not expect a large number of people to fall ill. It would not be surprising at all — if not likely — that we’re going to see a bit of that.”

Predicting an outbreak is tricky because it depends on so many different variables that are really hard to track. Most of the symptoms of Zika are not serious enough to require a doctor visit. Many people who have the disease never experience symptoms at all. The presence of these mosquitoes and the conditions they need to thrive can vary wildly within different states. And some places simply do a better job of tracking mosquitoes than others. So while the CDC and other organizations will take steps to prevent Zika from spreading in the US, they will likely not be able to eliminate it entirely.

Even if we do see outbreaks, they won’t be as serious as they’ve been elsewhere. The outbreak will not reach the level in the US that it reached in Brazil or Puerto Rico. There will be panicky headlines, no doubt, but that’s largely alarmism. This is a scary disease, and it’s never a bad idea to take steps to avoid getting bitten, but you will not need to panic about Zika this summer.

Tagged
Wellness United States
What did you think of this story?
Meh
Good
Awesome

This German spa town is the most relaxing post-COVID escape