Barcelona might have become travelers’ favorite Spanish destination, but that doesn’t mean that the nation’s capital has nothing to offer to visitors. Madrid’s many barrios are filled with beautiful and lively plazas, traditional tapas bars, parks, museums, and historical landmarks that will satisfy every type of tourist, whether they are craving local cuisine, art and culture, shopping, or time outdoors. So, make good use of the city’s top-notch transportation system to roam around these neighborhoods for a deep dive into what makes Madrid such a special place. 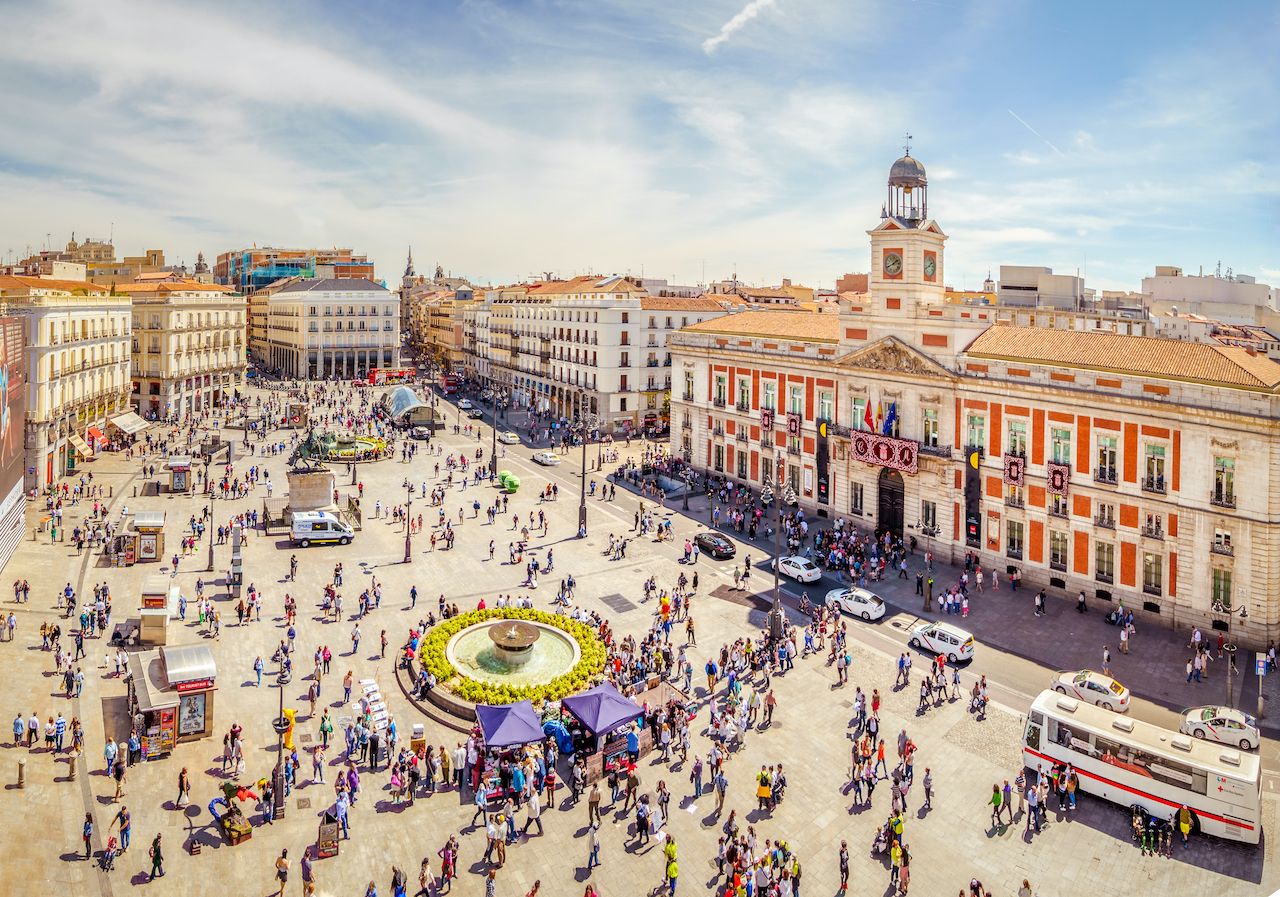 Sol — Puerta del Sol is one of Madrid’s most iconic sites. The semi-circle plaza is dominated by the Casa de Correos, a baroque red-and-white building topped with a bell tower, and by two famous statues: “The Bear and the Strawberry Tree” and “The Equestrian Statue of Carlos III.” Being the main plaza of the city, it is a hub of activity for locals and visitors, with many hotels and plenty of shopping opportunities; in fact, the three most popular shopping streets in Madrid begin at Puerta del Sol: Preciados, Arenal, and del Carmen. The neighborhood is also home to several eye-catching pieces of neoclassical architecture, so be sure to interrupt your purchases to check out the Royal Academy of Fine Arts and the Royal Theatre. 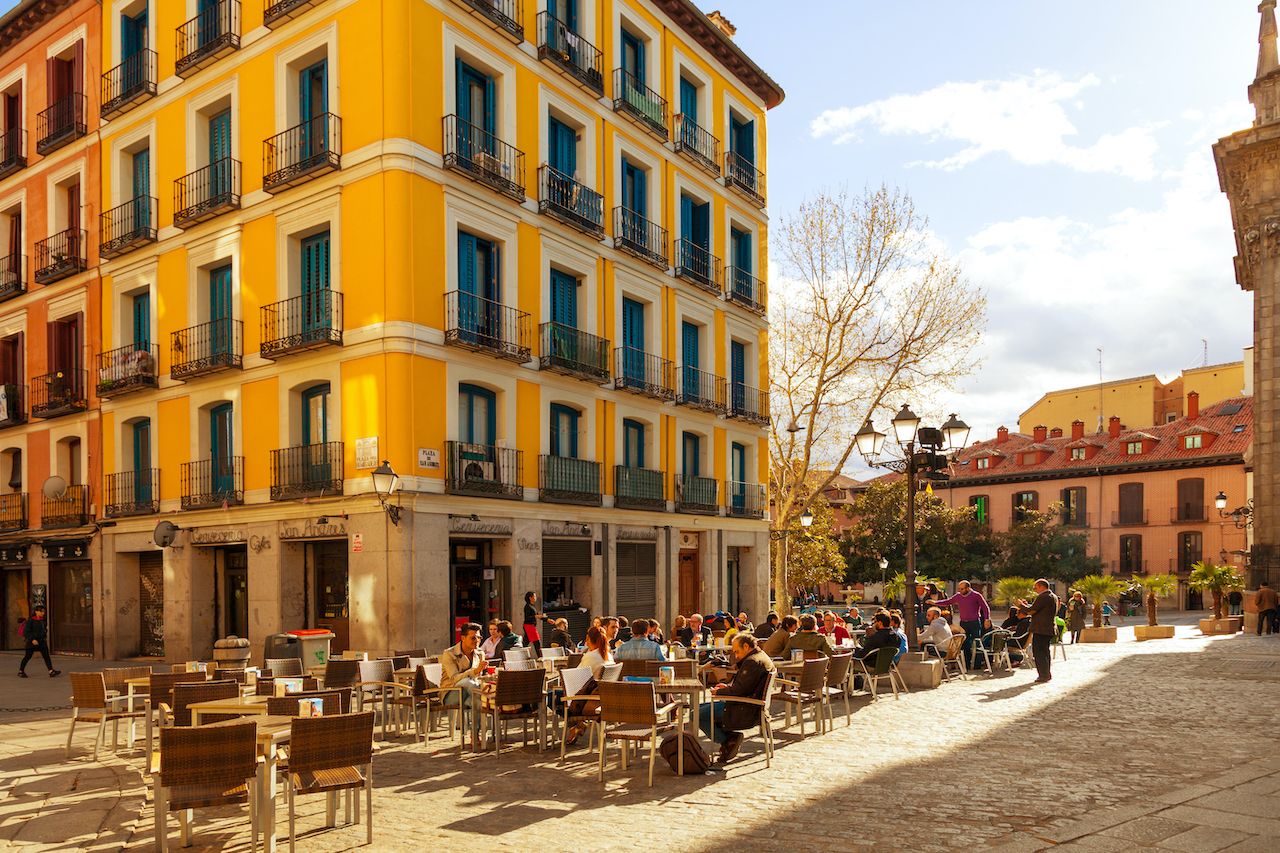 La Latina — La Latina is filled with casual tapas bars where anyone can indulge in un pincho de tortilla (a Spanish potato omelet) and a couple of tipples. The lively neighborhood is the place where locals meet for after-work drinks or a Sunday beer. Grab yourself a spot at the terrace of La Buha, a very popular Spanish tavern serving hearty portions, for a delicious culinary immersion. If you happen to be in the city on a Sunday, make sure to wander the neighborhood’s popular El Rastro flea market. For a bit of culture, head to one of Latina’s many theaters hosting international and local plays, or pop into the imposing Basilica of San Francisco el Grande to take in the grand architecture and admire some paintings by Goya and Zurbarán. 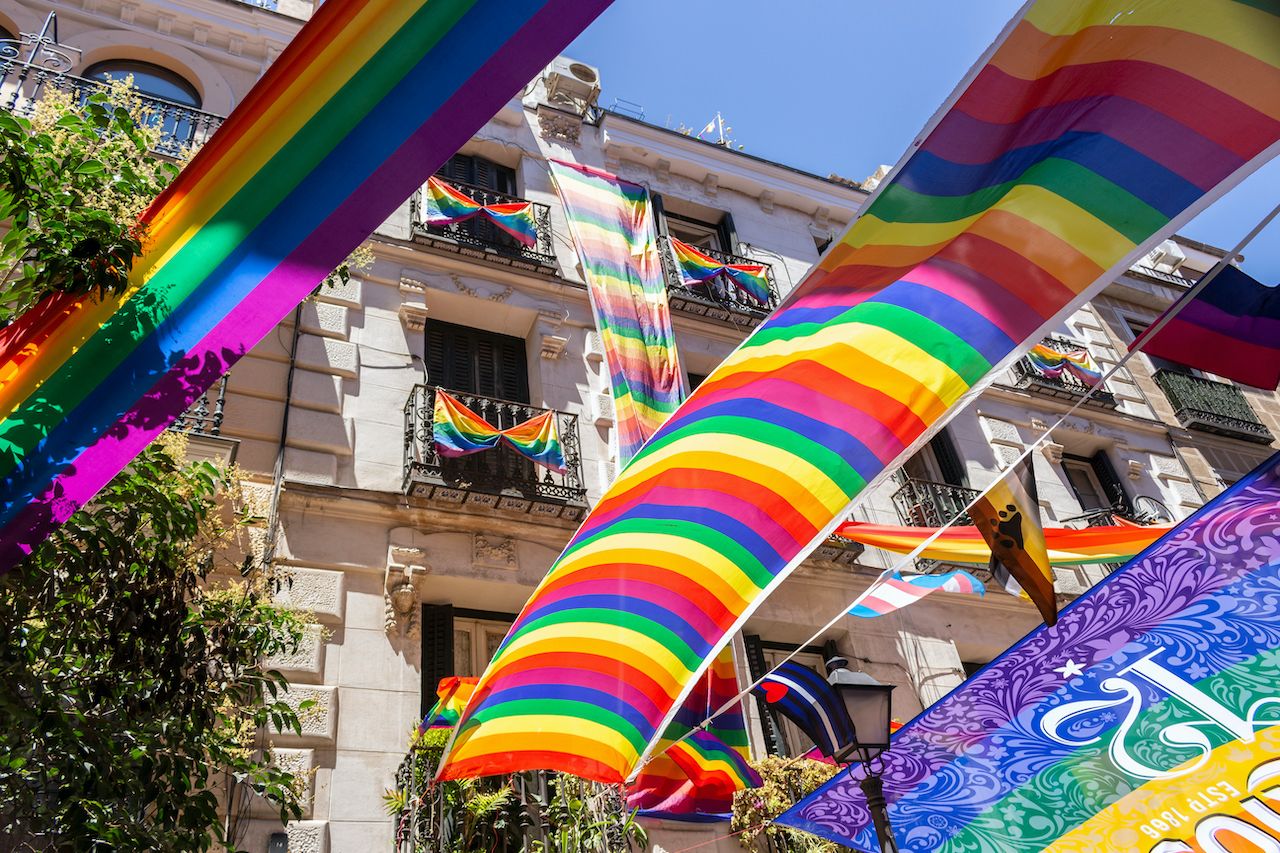 Chueca — In Chueca, tradition meets modern fun. This neighborhood has well-preserved historical buildings, like the Art Nouveau Palacio de Longoria with its ornamented facade and jaw-dropping glass dome inside, but the area is also the city’s hub for the local LGBTQ+ community and the heart of Madrid’s nightlife. The Pride colors are displayed all over Chueca, especially in the metro where the walls are entirely adorned in a joyous rainbow. The Plaza de Chueca, the neighborhood’s center, is surrounded by restaurants and bars like Tony 2, a piano bar where you can croon along well into the night. Many young designers showcase their work in Chueca, especially in the pedestrian street Fuencarral. In fact, many streets in this neighborhood don’t allow cars, which makes exploring the neighborhood fun and relaxing. The streets of Chueca are especially lively during the Pride Parade, which is held in late June and early July. 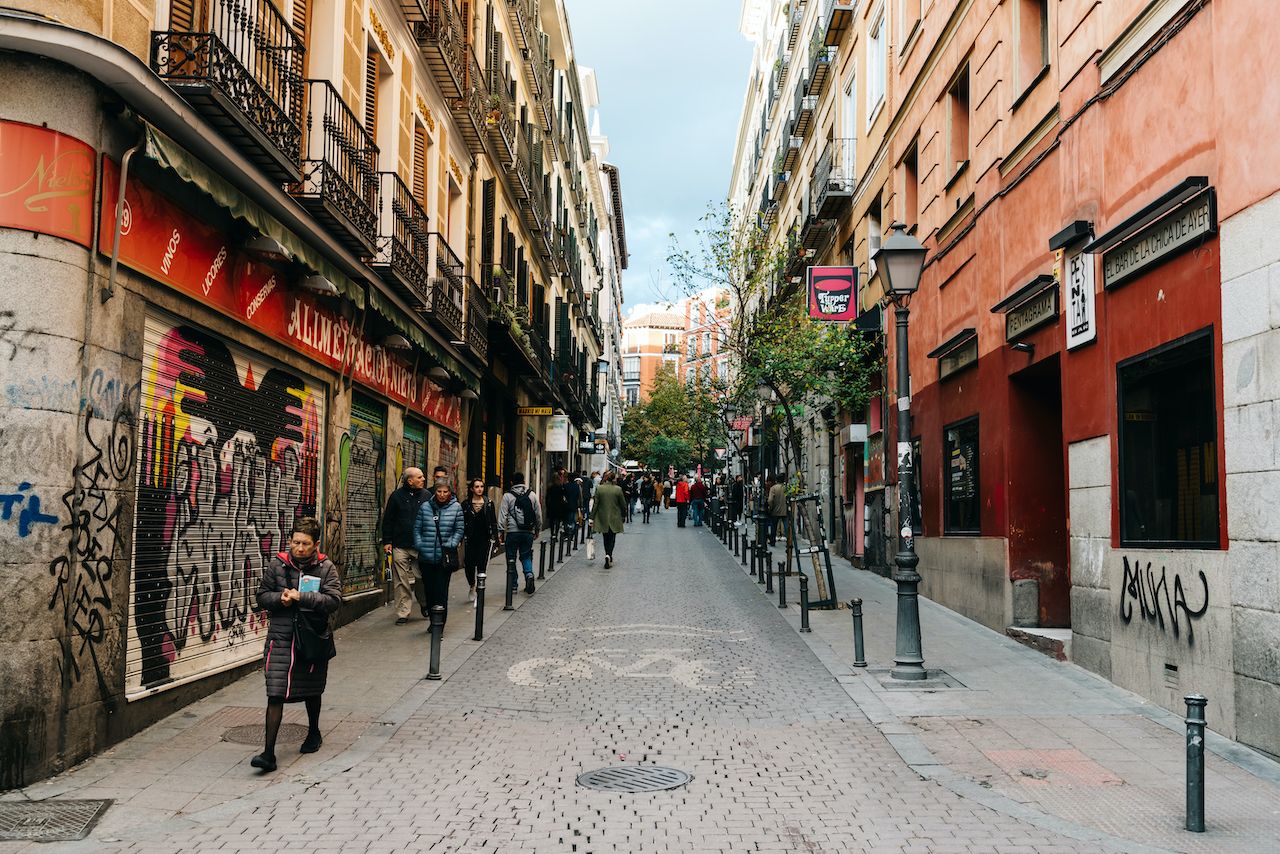 Malasaña — This rapidly gentrifying neighborhood is where La Movida Madrileña, an underground cultural and artistic movement, emerged after the death of fascist dictator Franco in 1975. Since then, Malasaña has been the gathering sport of alternative artists of all kinds and attracts many expats and tourists. The center of this ever-hip and bohemian neighborhood is the Plaza Dos de Mayo, but there are other small squares like Las Comendadoras or San Ildefonso, around where there are bars and cafes worth checking out. If you’re here after dinner, venture over to Kike Keller, an art and design store which turns into a swanky cocktail bar during the weekends. If you like any of the exhibited work, you can choose to purchase it. 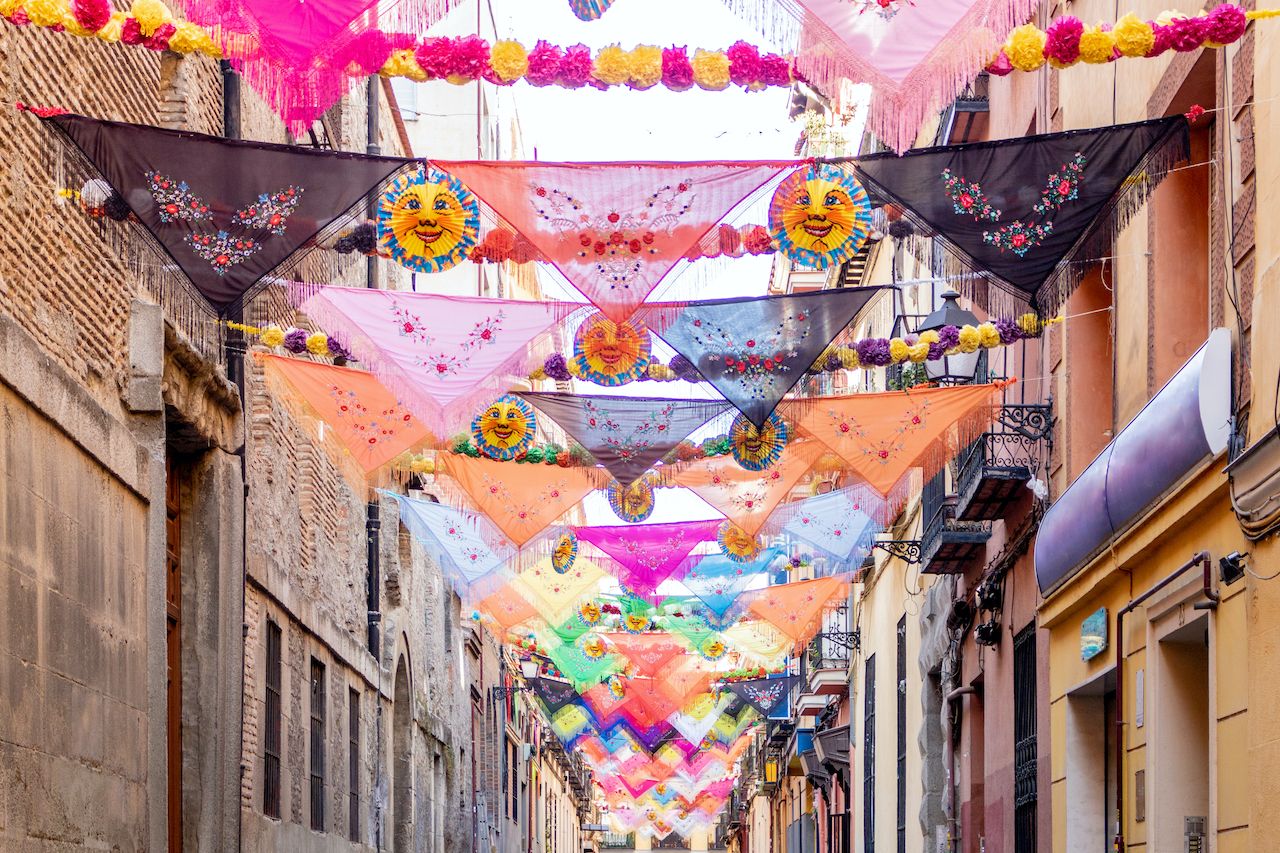 Lavapiés — Lavapiés is a no-frills neighborhood dating back to the Middle Ages. Its many narrow streets are home to a melting pot of cultures and some vibrant and creative street art. Take an afternoon to walk around the area to appreciate the kaleidoscope of colors that adorn its walls and try out the global cuisine available. For great cocktails and tasty grub, head to Los Chuchis. 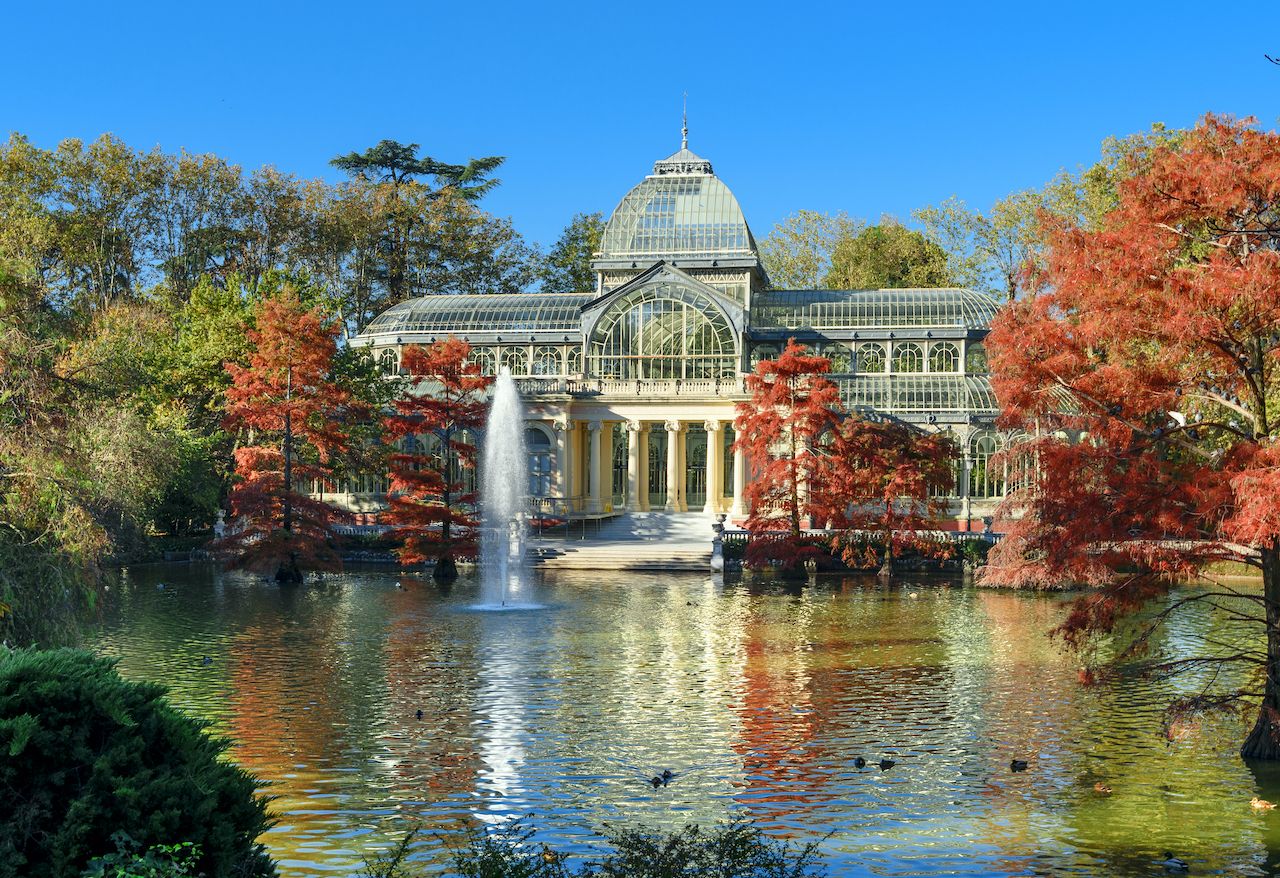 Barrio de Salamanca — This ritzy neighborhood is home to the Milla de Oro, or Golden Mile, which refers to a number of streets filled with the fancy shops of high-end designers, jewelers, etc. If that’s not your scene, when you’ve taken in some of the beautiful architecture of the area, head to Madrid’s most famous park, El Retiro, instead. This immense green space is an oasis of nature in the middle of the city and, as such, attracts many locals visitors. Enjoy a walk among the 15,000 trees, rent a rowing boat for some fun on the artificial lake, and check out the magnificent 1887 Glass Palace and its exotic plants. A visit to Salamanca would not be complete without a visit to the world-class museum El Prado. When hunger strikes, hit Casa Dani, a Spanish restaurant inside El Mercado de la Paz, a large neighborhood market.