There’s enough to do and see in Madrid to occupy several days, or a lifetime, but its surroundings are a wonderful window into another side of Spain, where life occurs at a slower pace than in the capital. Spain is filled with historic towns. and the ones surrounding Madrid are easily accessible, beautiful, and fascinating. 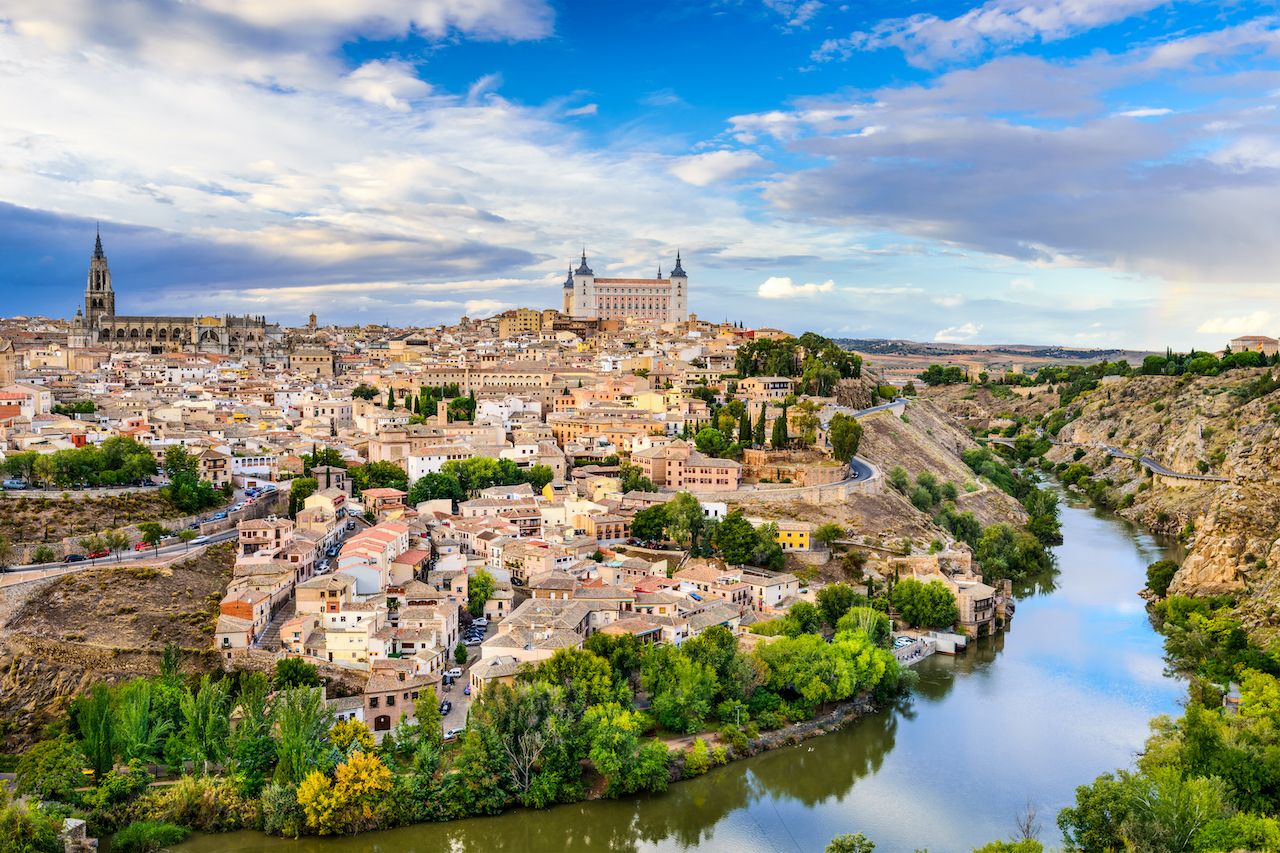 Toledo — In Toledo, medieval history surrounds you around every corner. Inside a compact space, you can find buildings with Jewish, Islamic, and Catholic roots. You can visit an old Jewish neighborhood and the Sephardic Museum, housed in a synagogue dating to the 14th century. Among several churches is Toledo’s celebrated 13th-century Gothic Cathedral, which was built atop a mosque, which had been built atop a church. And throughout the city, you’ll find characteristics of Moorish architecture. The Toledo Alcazar today houses the Museum of the Army, an unusual but interesting look at the history of the Spanish forces.

Getting here from Madrid is easy via train or bus, and it’ll take you about half an hour. The city is walkable, but there are many hills, so be sure to wear comfortable shoes. If your budget allows you to treat yourself during this day trip, make a lunch reservation at Cigarral del Ángel. Here, award-winning chef Ivan Cerdeño will delight you with his take on traditional Spanish cuisine. 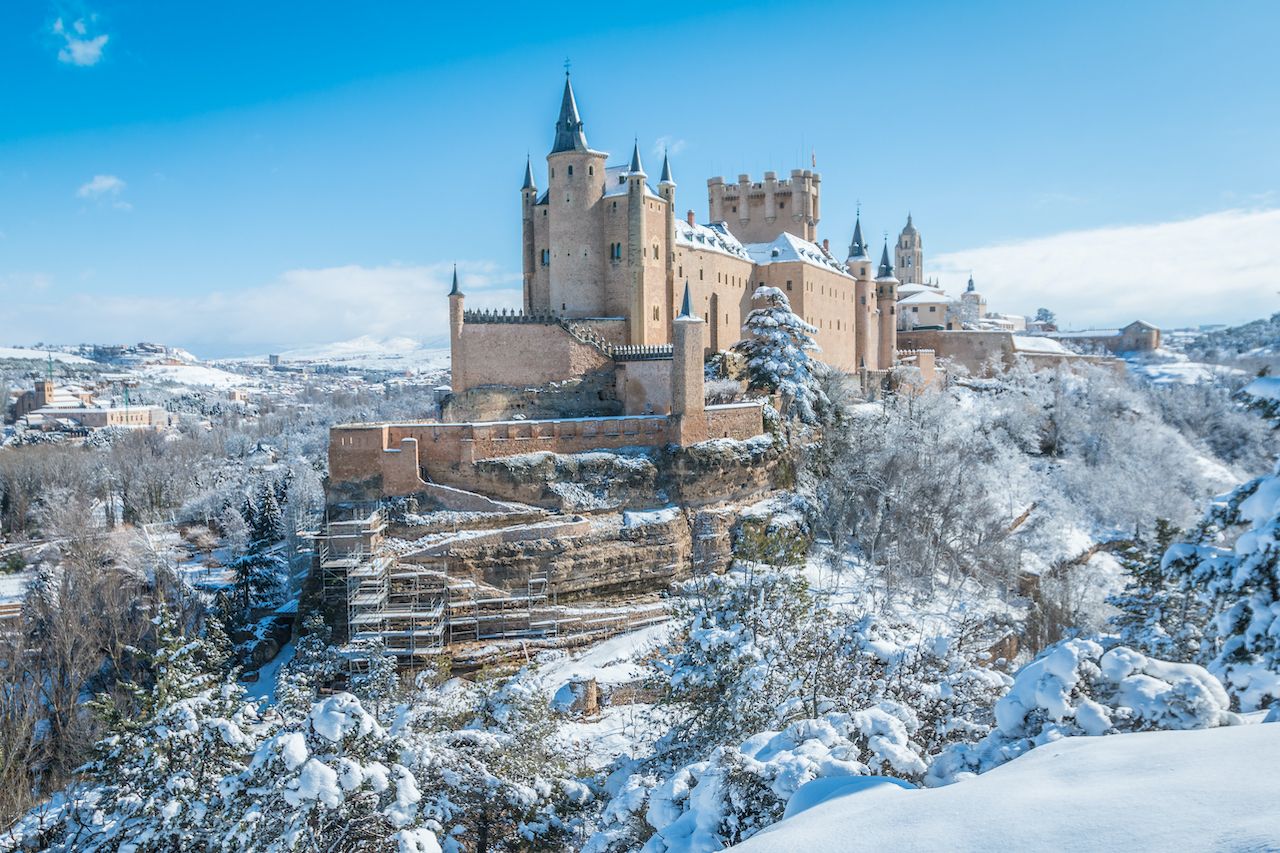 Segovia — Rumor has it that the castle in Walt Disney’s logo was inspired by Segovia’s famous Alcazar palace. We aren’t certain about that, but we do know that you have to go explore this iconic Spanish city if you have the chance. The Alcazares were castles or fortresses built during the Moorish rule over Spain between 711 and 1492. Segovia’s elegant hilltop Alcazar and the 2000-year-old Roman aqueduct are two of the many historic monuments in this UNESCO World Heritage city.

Due north of Madrid, Segovia is just over an hour away by car and is easily accessible by bus or train as well. Once in Segovia, you should also try the cochinillo, which roughly translates into a roasted suckling pig. Most bars and restaurants around the city center will offer it on their menus. Other than the food and monuments, Segovia is filled with narrow and romantic streets that are bound to charm you. Try to stay after sunset; the whole city lights up and the aqueduct looks particularly pretty. 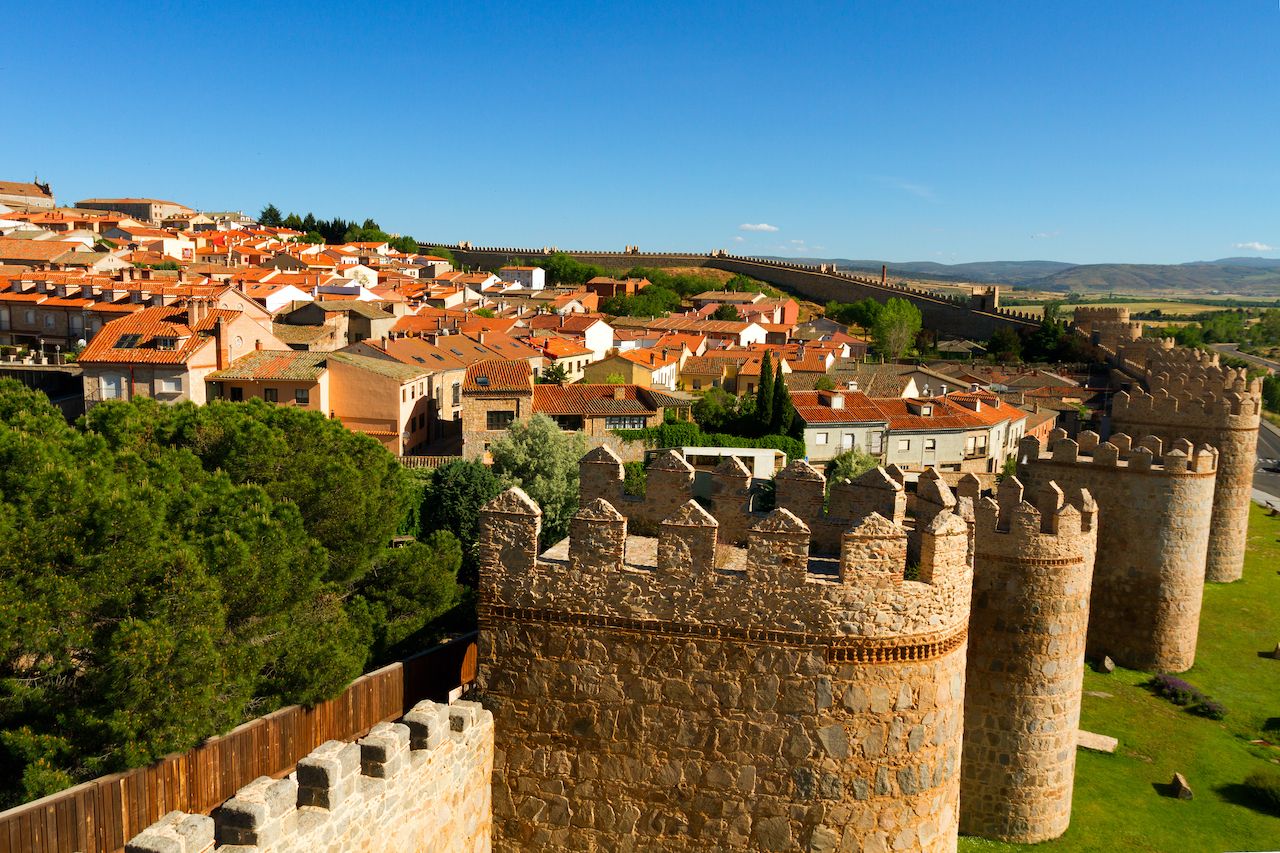 Avila — This city is best known for its imposing medieval walls, 10 feet thick and 40 feet high, which were built for protection in the late 11th century and completed in the 1200s. Add in the rolling green hills beyond, and don’t be surprised if you feel like you’re in the middle of a storybook when you visit Avila. You can go atop the walls for five euros ($5.60) and walk a stretch of them, accompanied by an audioguide. If you’re feeling ambitious, you could also walk outside the walls around the more than one-and-a-half-mile perimeter.

Beyond the walls and its towers, take time to visit some of the many historic, religious buildings in the city, which include the Monastery of Santo Tomas, the cathedral, and the Saint Vincent Basilica. It’ll take you a couple of hours by train or bus to get there from Madrid. You’ll find lots of lunch options in town, but note that in Avila it’s the desserts that stand out. Try the yemas de Santa Teresa, simple but delicious cakes made with egg yolks that you’ll see visitors from Madrid bringing back with them to the city. 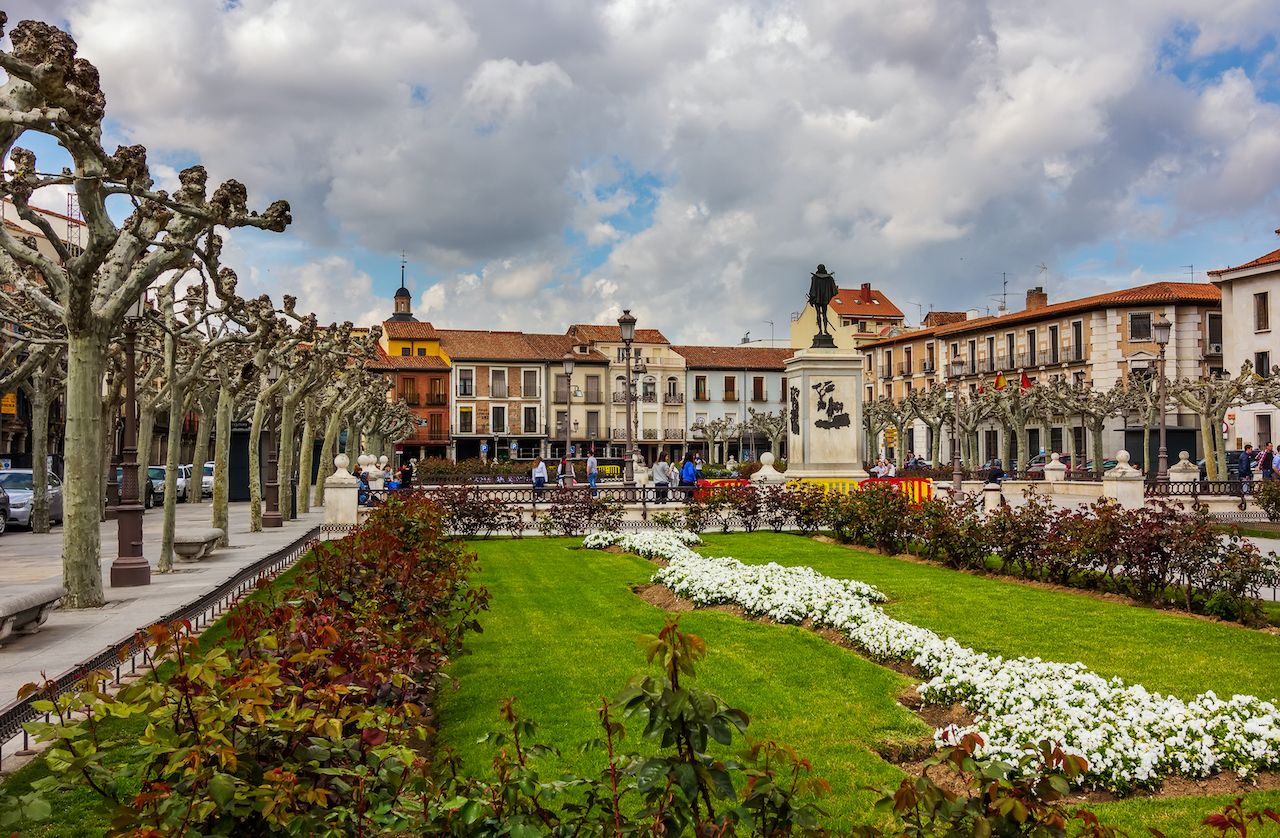 Alcalá de Henares — Alcalá is a college town about an hour from Madrid by train or 45 minutes by car. The Universidad de Alcalá occupies regal historic buildings that date to the 1500s. Its great hall was designed by the same architect who designed the Segovia Cathedral, and it’s Mudejar ceiling is a sight to behold. The hall is the location for an annual Miguel de Cervantes prize honoring Spanish-language writers.

This is only fitting as Alcalá is best known as the birthplace of the Miguel de Cervantes, the author of Don Quixote. Throughout the small city, you’ll see murals with memorable scenes from one of literature’s most famous works of satire, still beloved more than four centuries since it was first published. As Alcalá is a college town, you’ll find plenty of budget lunch spots, and options for a more refined meal as well. 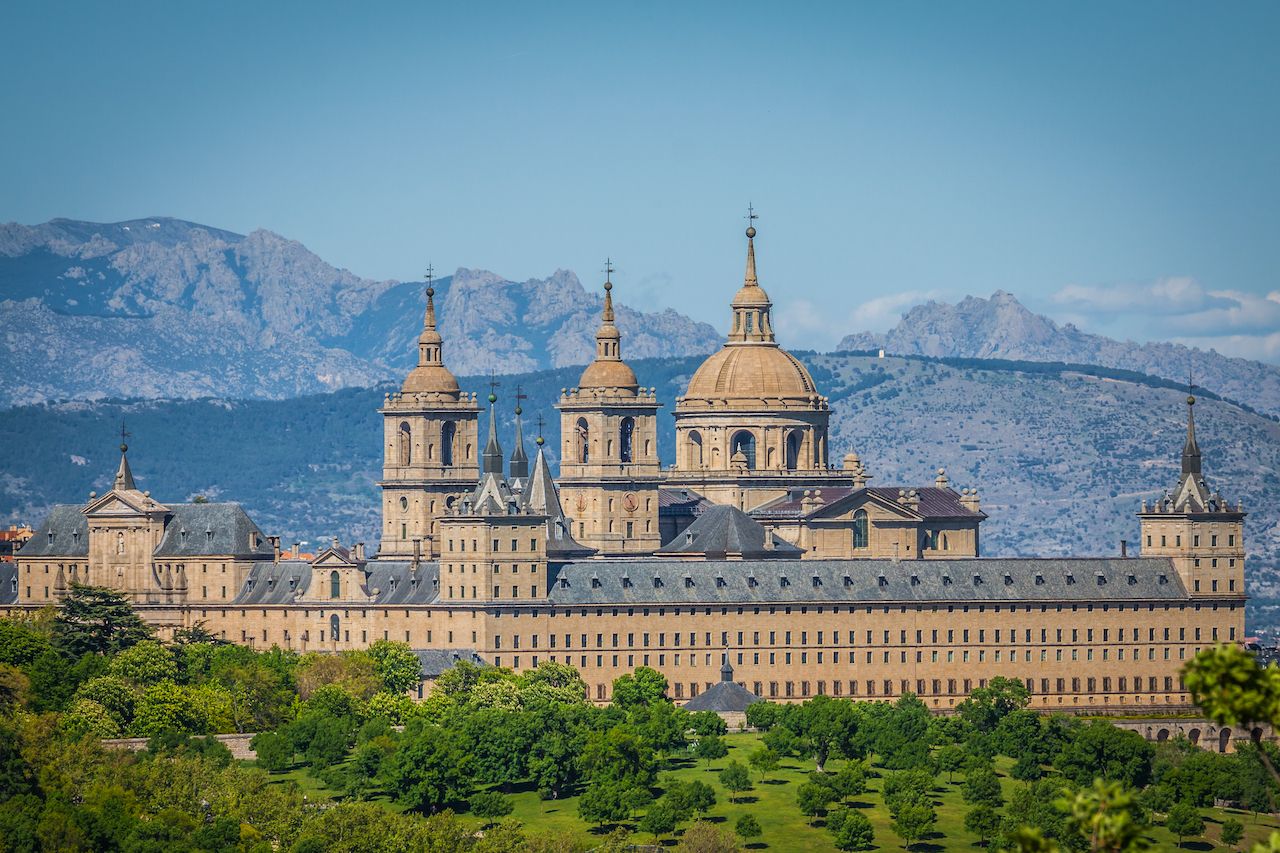 San Lorenzo de El Escorial — Located in the heart of the Sierra de Guadarrama mountain range, San Lorenzo de El Escorial impresses visitors with its massive Royal Monastery, which was declared a UNESCO site in 1984. Built by King Felipe II in the late 16 century, the building is packed with tapestries and artwork that belonged to the royal family. You can tour the devout king’s spartan bedroom, and look onto the library, with its tens of thousands of books and documents dating back to the 15th century. Tickets to visit are €12 ($13.30) for adults but €10 ($11.11) if you buy in advance online.

El Escorial is also surrounded by mountains, which is perfect if you’re craving some larger natural sites than the ones you usually see in Madrid. You can reach it by car in 50 minutes or in just over an hour by train from Madrid. On weekends, you can take the historic Felipe II train to get there. You’ll find plenty of lunch options in the vicinity of Plaza San Lorenzo.