Most of Atlanta’s nicest hotels are clustered in Midtown, Buckhead, and Downtown, all perfectly good areas to serve as a home base for an Atlanta visit. Since Atlanta traffic can be a bit tricky, it’s best to choose a hotel that’s walking distance or a quick ride-share to at least some of the city’s attractions. There are Airbnbs in Atlanta scattered throughout the city’s neighborhoods and in the suburbs, though it’s easiest to stay inside the city limits to cut down on time spent in the car. Here are some of Atlanta’s best accommodation options for visitors looking to explore the city. 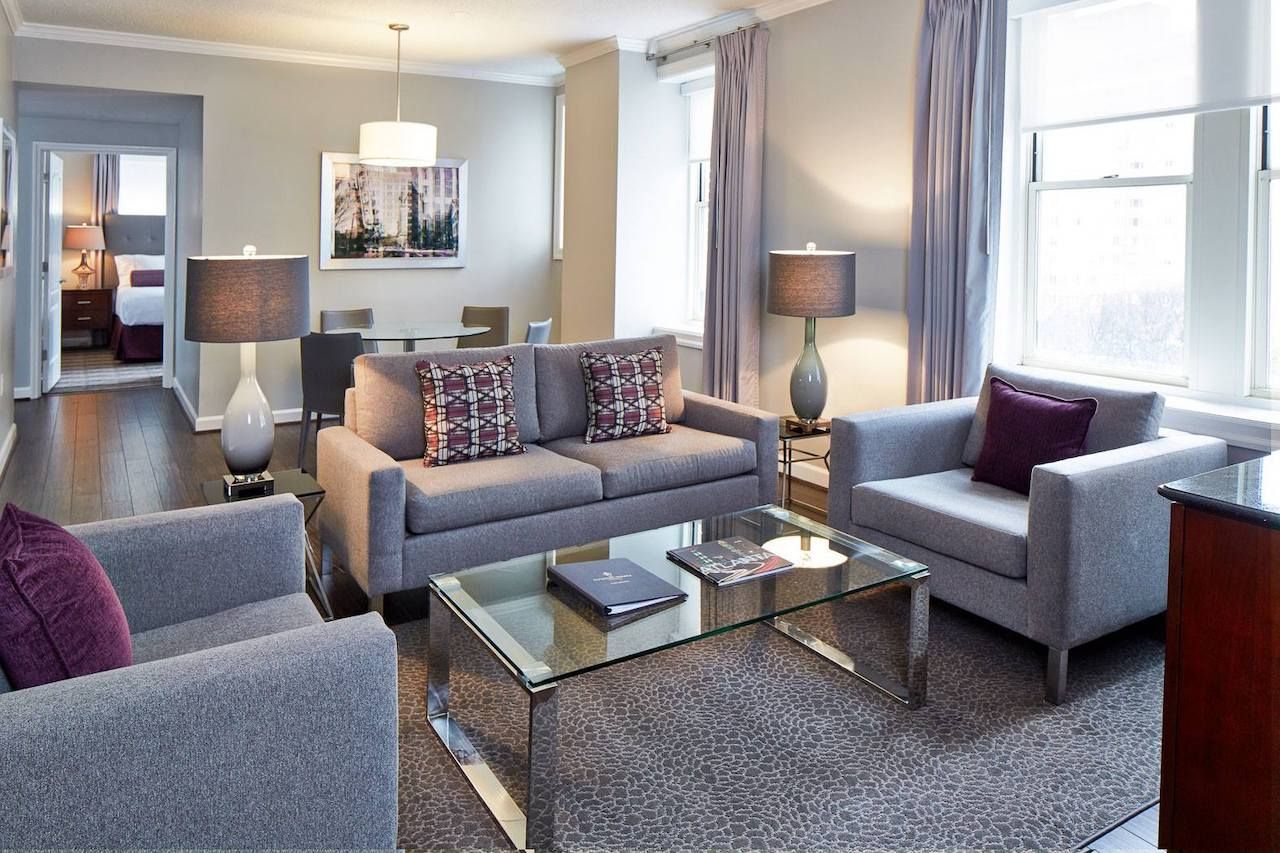 The Georgian Terrace Hotel — It seems fitting that F. Scott Fitzgerald was once a guest at this elegant, circa 1911, Beaux-Arts hotel in Midtown as some of its features seem to be channeling Gatsby. It’s set directly across the street from the Fox Theatre, so it’s a convenient option if you have tickets to a show. The hotel’s Livingston Restaurant & Bar patio has a view of the Fox’s iconic flashing sign, and its basement cellar bar Edgar’s Proof and Provision specializes in barrel-aged cocktails. From the hotel, it’s a straight shot down Ponce de Leon Avenue about a mile to Ponce City Market and the Atlanta Beltline Eastside Trail. It is also a convenient spot for Downtown’s Georgia Aquarium and Midtown’s High Museum of Art.

Hotel Clermont — Recently revamped from abandoned and run-down to ultra hip and swanky, this historic boutique hotel on main drag Ponce de Leon Avenue is one of the hottest spots in the city and a quick walk to Ponce City Market and the Atlanta Beltline Eastside Trail. The hotel has three main gathering spots: its Astroturf Roof Top, its bourbon-focused Lobby Bar, and its French-American brasserie, Tiny Lou’s. The hotel features mid-century modern furnishings, rich jewel tones, and lots of velvet. 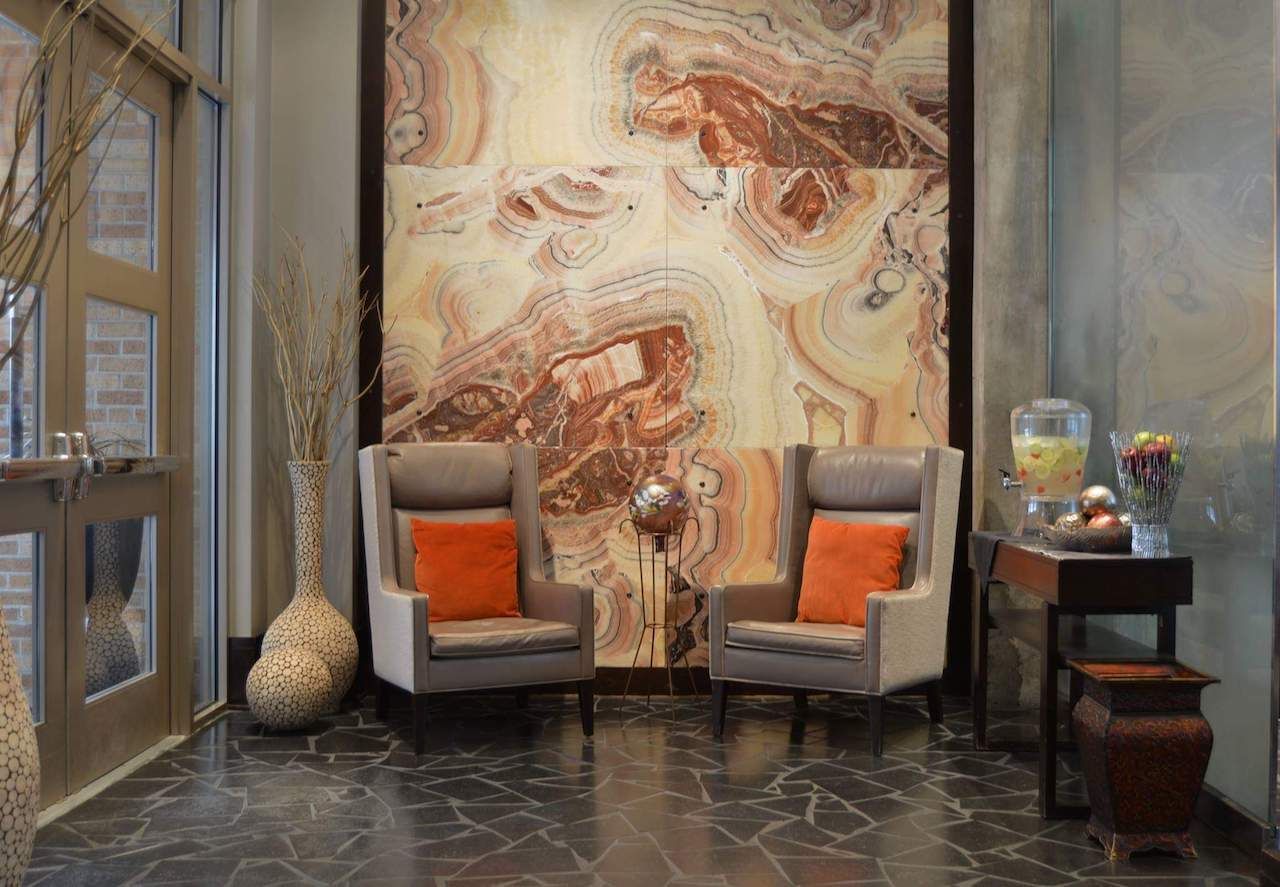 The Glenn Hotel, Autograph Collection — This chic boutique hotel in Downtown is walking distance to some of the city’s main tourist attractions: the Georgia Aquarium, the National Center for Civil and Human Rights, the World of Coca-Cola, and the College Football Hall of Fame. And its breezy rooftop bar, Skylounge, provides panoramic views of the Atlanta skyline.

Stonehurst Place — This elegant, six-room bed and breakfast set in a circa-1896 mansion near Piedmont Park is one of many historic homes in this tree-lined residential section of Midtown. The home has been updated with modern furnishings and artwork, eco-friendly solar panels, and luxuries like heated marble floors and towels, but it still retains plenty of old-world touches, including a stone front porch, hardwood floors, and several fireplaces. It’s an easy walk to the restaurant scene at the corner of 10th Street and Piedmont Avenue. 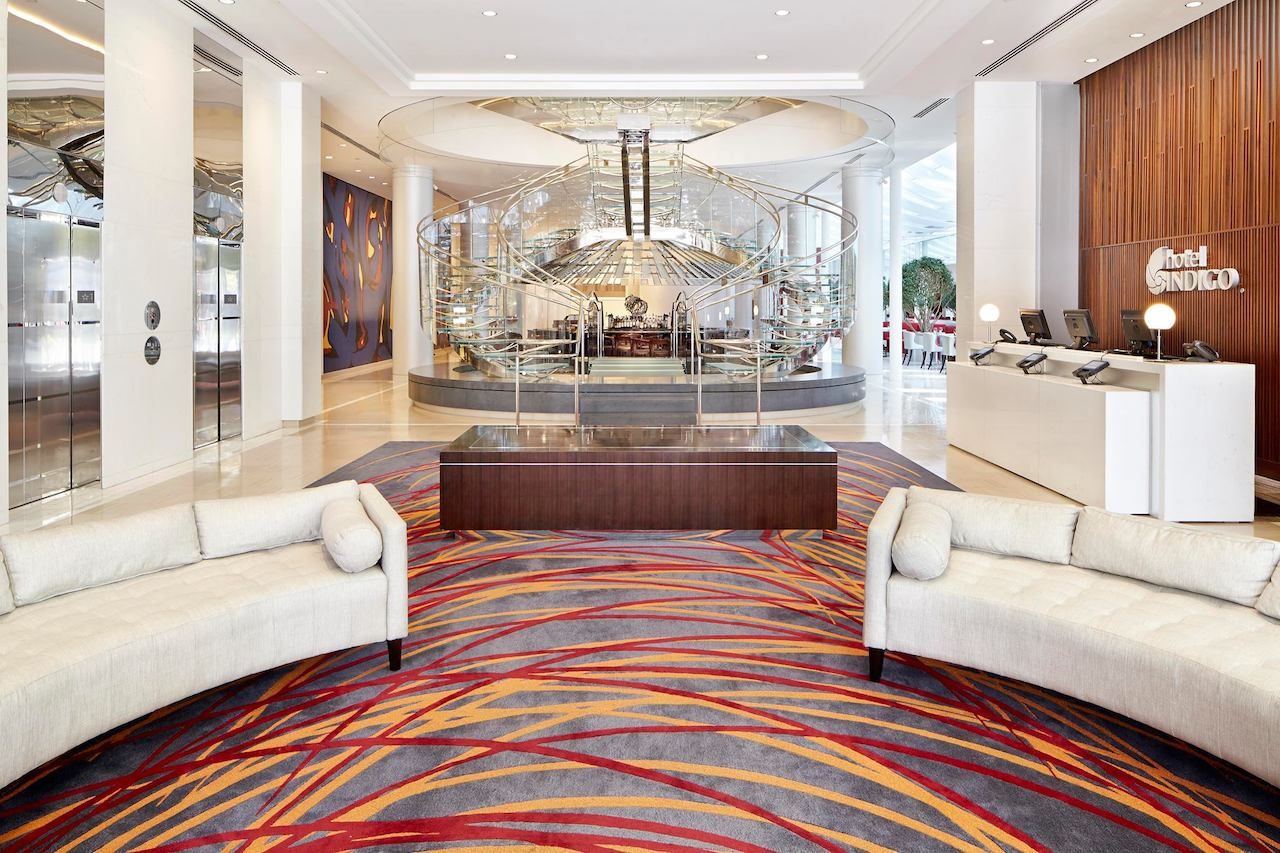 Hotel Indigo Atlanta Downtown — This ultra-modern hotel in Downtown is one of late architect John Portman’s more recent designs. Most notable is the lobby’s futuristic curved glass and steel staircase, which is a work of art in and of itself. The hotel’s restaurant, The Drafting Table Cocktails & Kitchen, features mid-century modern-inspired circular bar as a centerpiece. Hotel Indigo is across the street from the Peachtree Center Marta station, making it easy to access the airport and attractions in Midtown, Buckhead, and even downtown Decatur. 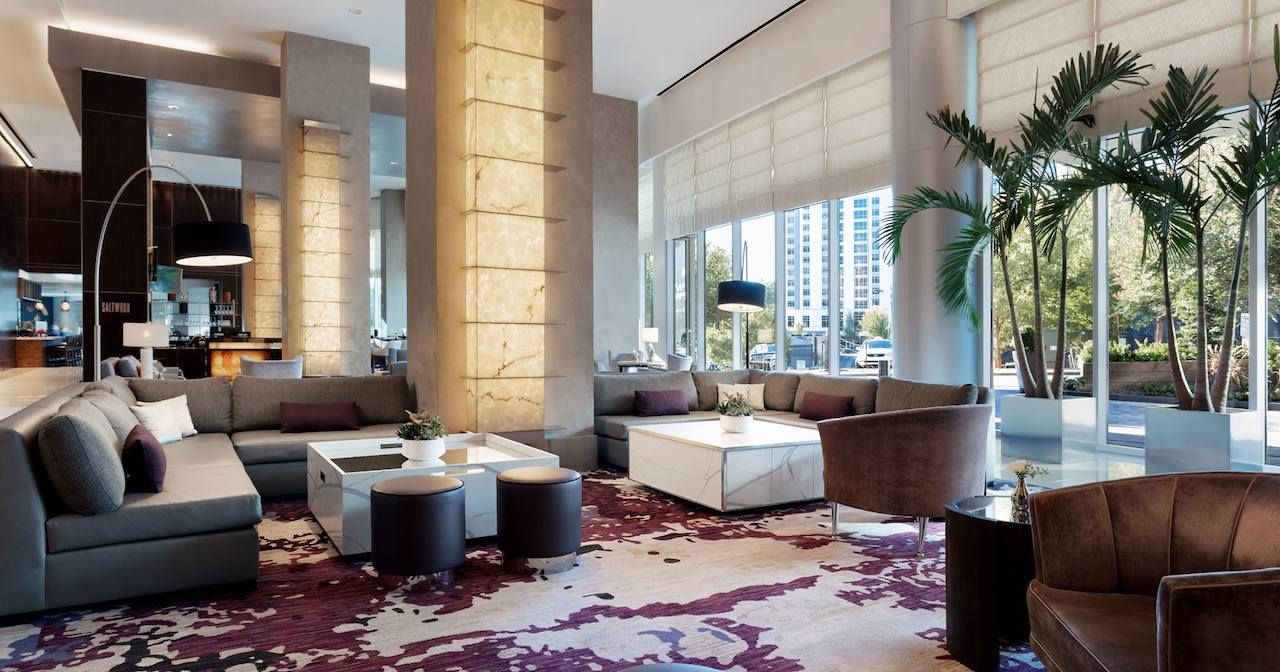 Loews Atlanta Hotel — Sleek and modern Loews Atlanta in Midtown is just a couple of blocks from Piedmont Park and the Midtown Marta station. It’s known for its spacious spa, Exhale, which includes a hammam, steam room, and sauna in addition to spa services and fitness classes. The hotel offers a complimentary Mercedes GL450 for tooling around the city.

The St. Regis Atlanta — The St. Regis is situated in Buckhead, walking distance to The Shops Buckhead Atlanta and the Atlanta History Center, and it’s set apart by a few things: its nightly champagne sabering ritual, which takes place in the lobby; its luxurious pool area with cafe and bar; and its gourmet restaurant Atlas Buckhead, where a Marc Chagall and a Claude Monet, among other noteworthy artists’ works, adorn the walls. The St. Regis Bar is popular with the locals for a nightcap and is worth a visit. 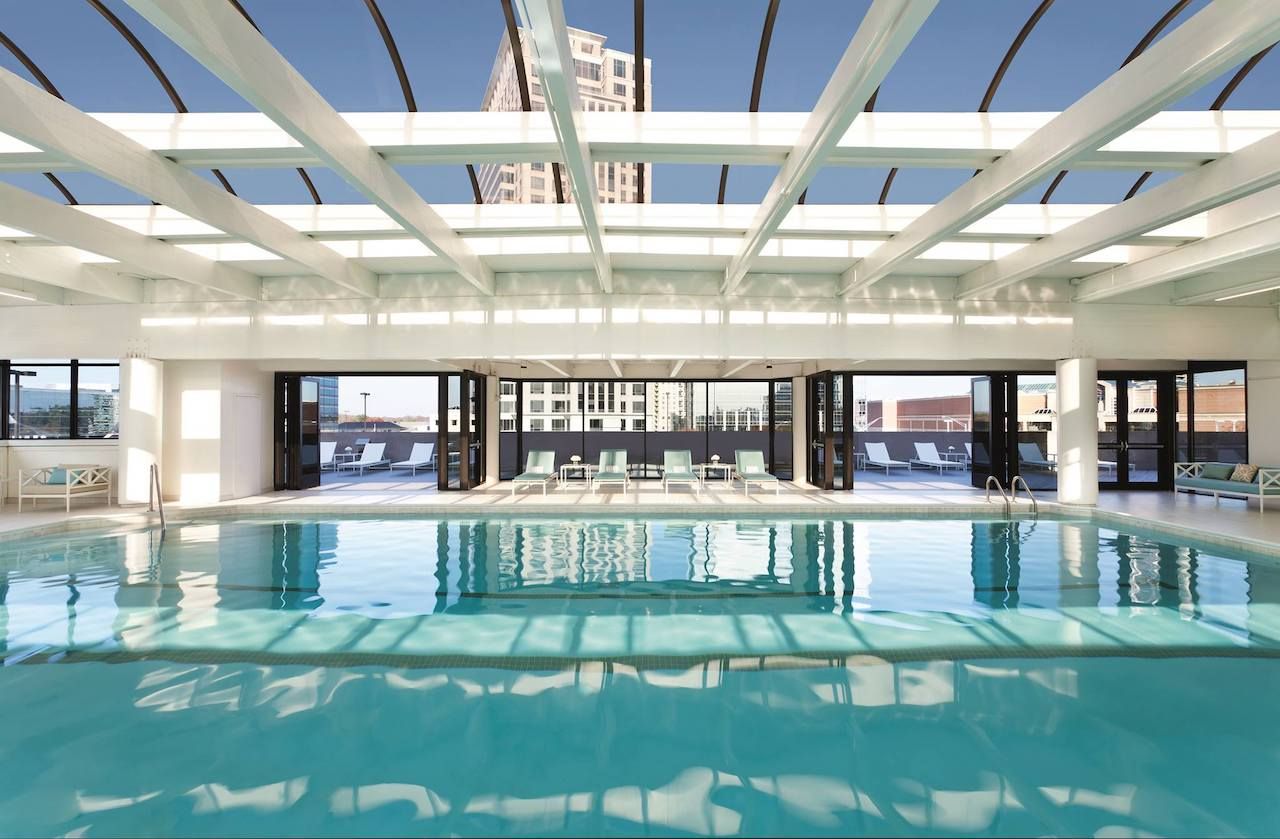 Four Seasons Hotel Atlanta — When it comes to luxury stays in Atlanta, the Four Seasons is top of the line with an opulent, chandelier-adorned lobby and a grand staircase. Situated in Midtown, it’s within walking distance of the High Museum of Art, the Museum of Design Atlanta, Piedmont Park, and the many restaurants and bars in the Midtown area. Park 75 is popular for brunch, and its craft cocktail bar Bar Margot also has an excellent vinyl collection. 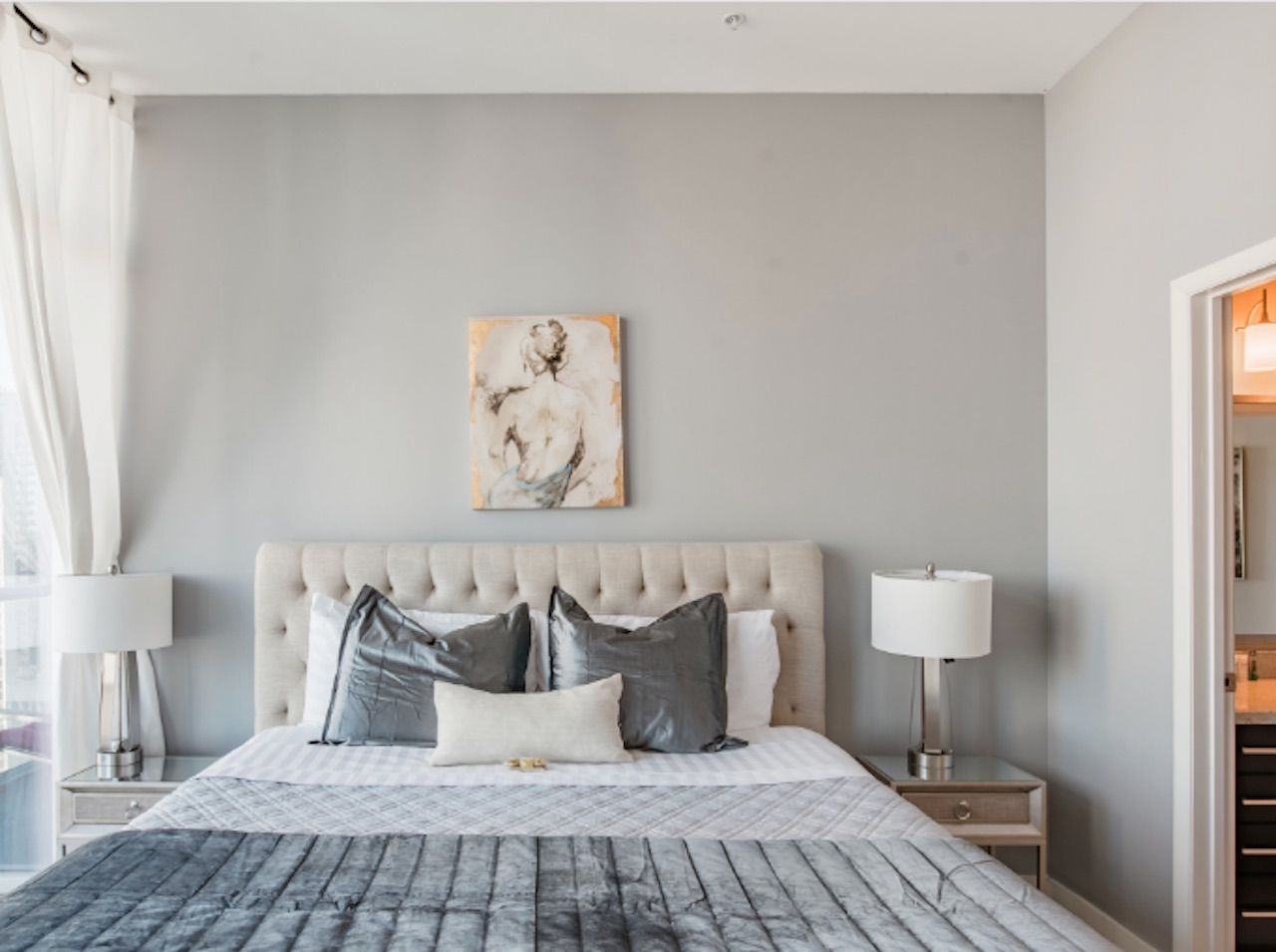 Luxury penthouse in Midtown — This two-bedroom, two-bath, cosmopolitan penthouse apartment in a Midtown high-rise has floor-to-ceiling views of the city. It’s right in the thick of the Midtown action — steps to restaurants, bars, Piedmont Park, and all that Midtown has to offer.

Luxury two bedroom loft in the heart of Atlanta — The loft is located in the Flats at Ponce City Market apartment community in Old Fourth Ward is just an elevator ride away from PCM’s food hall, shopping, restaurants, and rooftop fairground Skyline Park. The Atlanta Beltline Eastside Trail is adjacent to PCM, so Piedmont Park, the Atlanta Botanical Garden, and Inman Park’s vibrant dining scene are accessible by foot, bicycle, or scooter. 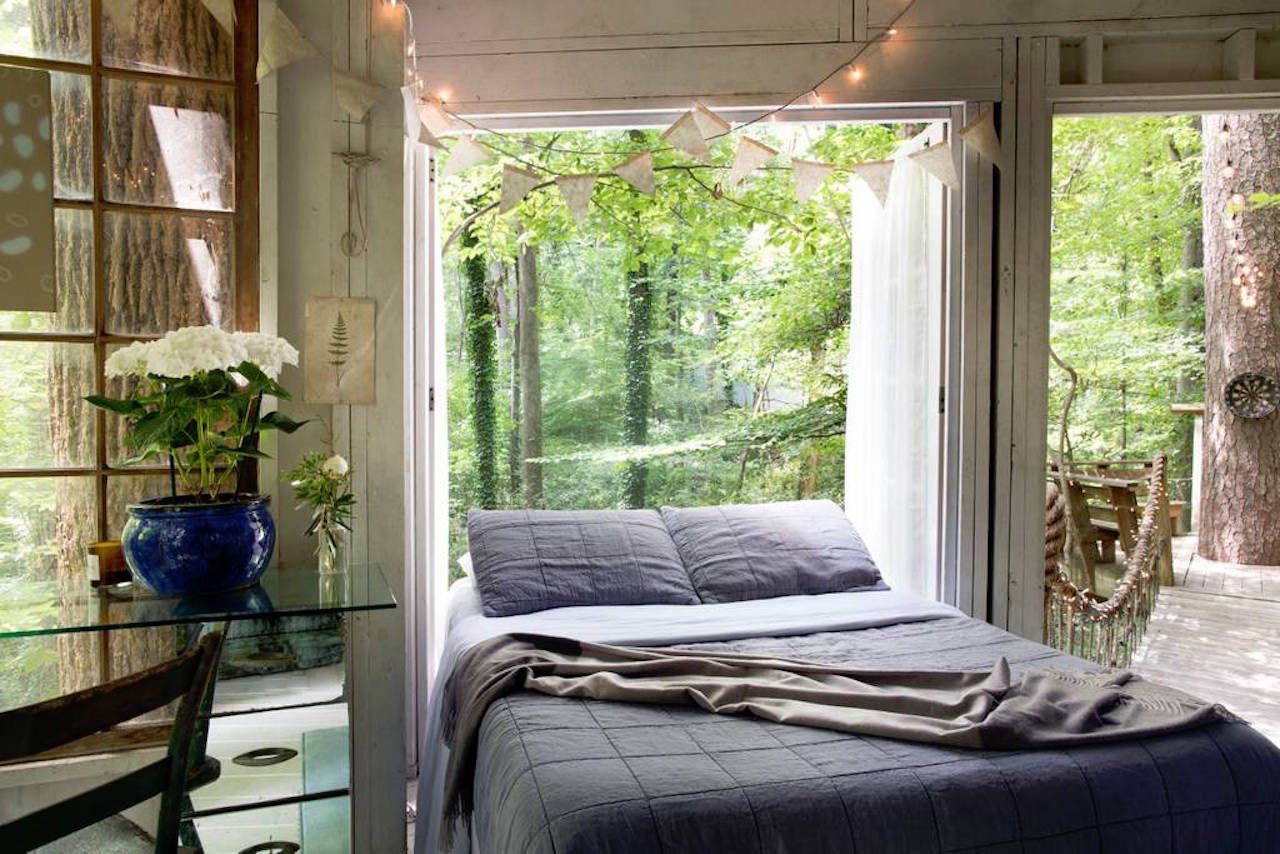 Secluded inner city treehouse — This backyard treehouse in a residential area of Buckhead has been featured in Travel + Leisure and Architectural Digest. It sleeps two, and the bed has wheels, so it can be rolled out to a platform overlooking a stream. It includes three separate living areas connected by rope bridges adorned in string lights — a sitting room, a bedroom, and a hammock deck. Note: The bathroom is in the basement of the owner’s home, and there’s no air conditioning or heat in the treehouse.

Stylish bright apartment in Midtown — A one-bedroom, one-bath apartment central to the action of West Midtown (aka Westside). The space is tidy and petite with an open-concept kitchen and living area and a small separate bedroom. It has free parking, but guests can ditch their cars to enjoy the immediate area on foot.