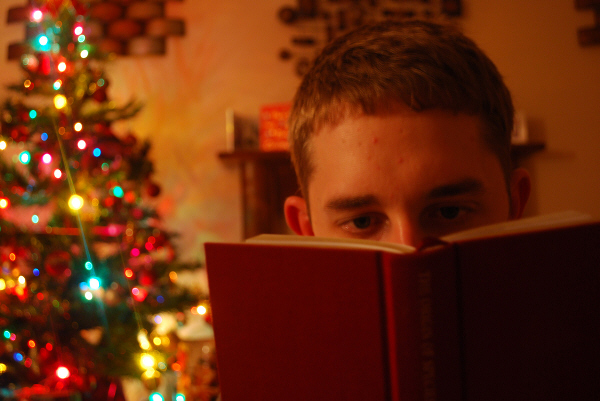 Christmas is my favorite time of the year. Apart from compunctious chocolate eating and watching endless reruns of Friends on television, it’s also that time of the year when I spend time with friends and extended family scattered across the globe.

THOUGH I HAD a few Christian friends growing up, being brought up Hindu meant my family’s religion and festivals were more important to us. Years later, I would experience Christmas in all its splendor, and my first introduction to this tradition would come in the form of books.

Here are four books that have been instrumental in the way I perceive Christmas.

A Doll’s House, by Henrik Ibsen

A Doll’s House, a play by Norwegian playwright Henrik Ibsen, is set on Christmas Eve. The playwright articulates the notion of Christmas by clearly defining the birth of one’s self and the decay of another self. In the opening scene, we are introduced to Nora Helmer, who is perceived as being “childish” by her patronizing husband.

Nora’s self-discovery and her decision to walk out on her husband was considered scandalous when the play was written.

When Nora declares that she has no home, no religion and that she wishes to travel all by herself — she wishes to discover her desires independently outside the patriarchal space, it signals the birth of the independent self and brings to light the plight of the woman masquerading in support of patriarchy, an imposition anointed by her husband.

Ibsen’s German agent said that it would not work well with audiences. In Germany, the lead actress refused to play Nora unless the ending was changed. This play is truly an inspiration because in as early as 1879, a man was talking about women’s rights. It is thus hardly surprising that the play is often referred to as “the first feminist play.”

The theme of Christmas in A Doll’s House is literal in that the setting of the play is on Christmas Eve but the exploration of the theme is largely symbolic. Her husband, for instance, promises her that if any calamities befell her, he would protect her and he would act as her Christ figure. However, when he does need to protect her, he accuses her of having slighted his honor.

Christmas is considered to be the birth of Jesus Christ and, in this case, it is the birth of the woman Nora, because she attains self-hood.

A Christmas Carol, by Charles Dickens

A Christmas Carol, by 19th-century English writer Charles Dickens, is about how a miserly man named Ebenezer Scrooge revises his notions of the world after four ghosts visit him in his dreams. The story begins on Christmas Eve when Scrooge’s deceased business partner, Jacob Marley, appears in a dream and warns him about his impending misery if he does not mend his ways.

The book taps into Scrooge’s inner demons and portrays how a man has been hardened by the tryst of fate. At first, the Ghost of Christmas Past appears, taking Scrooge back down memory lane and enabling him to relive his boyhood years.

The Ghost of Christmas Present takes him to the house of his clerk, Bob Cratchit, who Scrooge pays a rather measly salary and whose son, Tiny Tim is too ill and will die unless the family receives some financial assistance. The Ghost of Christmas Present predicts that Tiny Tim will die, but Scrooge turns over a new leaf and becomes a changed man by helping everyone around him and thanks to Scrooge, Tiny Tim’s life is saved.

The book deals with moral virtues which are associated with Christmas — kindness, altruism, philanthropy and a sense of community. It captures the spirit of Christmas and resorts to an allegorical mode of storytelling rather than a didactic approach. It is worth noting that A Christmas Carol, ever since it was published, has not been out of print.

The Dead, by James Joyce

The Dead is a short story written by Irish writer James Joyce. It is the final short story in his book Dubliners. The Dead is set between Christmas and New Year and tells the story of Gabriel Conroy, who realizes that his wife Gretta’s deceased childhood acquaintance, Michael Furey, was the Christ figure in her life.

It is a story about evaluating oneself.

While the image of Furey was in Gretta’s mind, Gabriel had constructed an image of his wife in his head where his wife could not think about anyone else apart from him.

The first character to be mentioned in this story is the caretaker’s daughter, Lily. The flower, Lily is the traditional symbol of the Blessed Virgin and is also a common sight at funerals. Gabriel’s first encounter with Lily marks the destruction of Gabriel’s fictional self and the beginning of the resurrection of Michael Furey.

The Dead is a story that tells us that Christmas is a time of both decay and regeneration.

“The Journey of the Magi,” by T.S. Eliot

The Journey of the Magi is written in the form of a monologue — from the point of view of one of the Magi who went to Bethlehem to witness the birth of Christ.

The poem draws from one of Lancelot Andrewes’ sermons of nativity and makes use of several Christian symbols. “The Three Trees” are symbolic of the crucifixion while dealing with Eliot’s constant theme of alienation when the narrator talks about going back home to “an alien people clutching their gods.”

“The Journey of the Magi” deals with birth and death and how the self is fragmented in its quest for absolute knowledge.